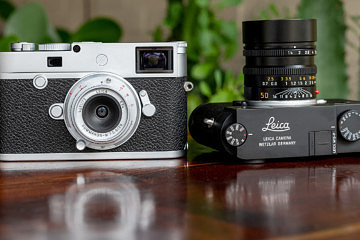 During my recent visit to Leica in Wetzlar I had the rare opportunity to be allowed into the actual production area of both the cameras and lenses.  At that time I was told that they were working on a new camera that had not been officially announced.  I was asked not to take any pictures of it and not talk about it until the official announcement.  That camera was the new Leica M10-P.  Since I don’t have any pictures that I took myself, I am relying here on an article …

With Photokina 2018 only about one month away (the massive industry trade show begins September 26), Leica has revealed a pleasant August surprise with the announcement of the M10-P. An upgrade to the hugely successful M10 digital rangefinder, the M10-P gives users a few great new features along with traditional “P” model styling cues. We just got the M10-P in hand yesterday and have a full breakdown of the changes and improvements. 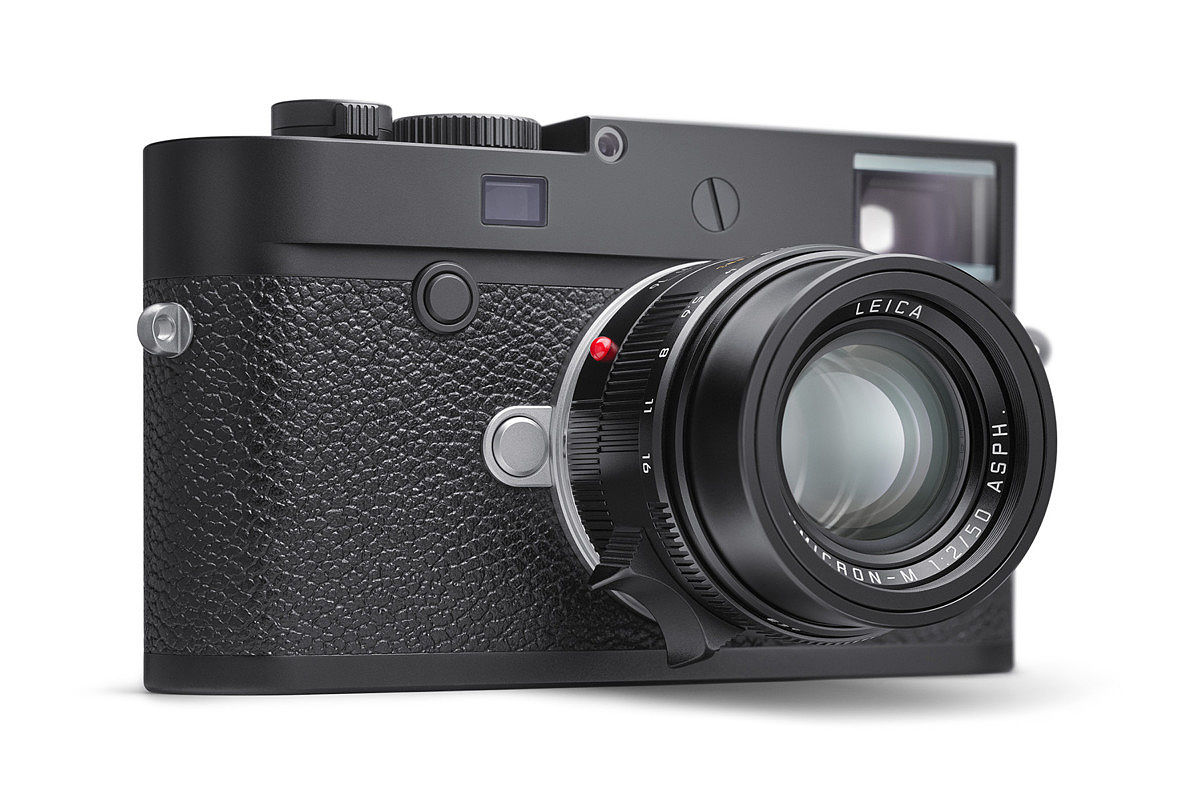 Leica’s first effort at enhancing their digital rangefinder mid-life-cycle with the M8.2 was a decade ago, in 2008. Featuring a black Leica dot logo for a more discreet appearance, a scratch-resistant sapphire glass LCD cover and a few other improvements, mint condition examples are still coveted today. Three years later, in 2011, the M9-P launched, going completely “logo-less” and also sporting a sapphire glass LCD. Following that trend, after another three years Leica introduced the M-P(Typ 240), which featured an increase in buffer size for a longer continuous burst and a frame line preview lever.

We had to wait a bit longer for the M10-P. In fact, it’s been exactly 4 years to the day since the M-P launch. But there is no doubt in my mind that our patience has paid off. Getting the obvious out of the way, the camera at its core is an M10. Of course, this is a good thing. Introduced in January 2017, the M10 showed what all those years of Leica’s digital rangefinders were leading up to – a camera that perfectly blends the classic rangefinder form factor with a cutting-edge sensor and streamlined, efficient operation. 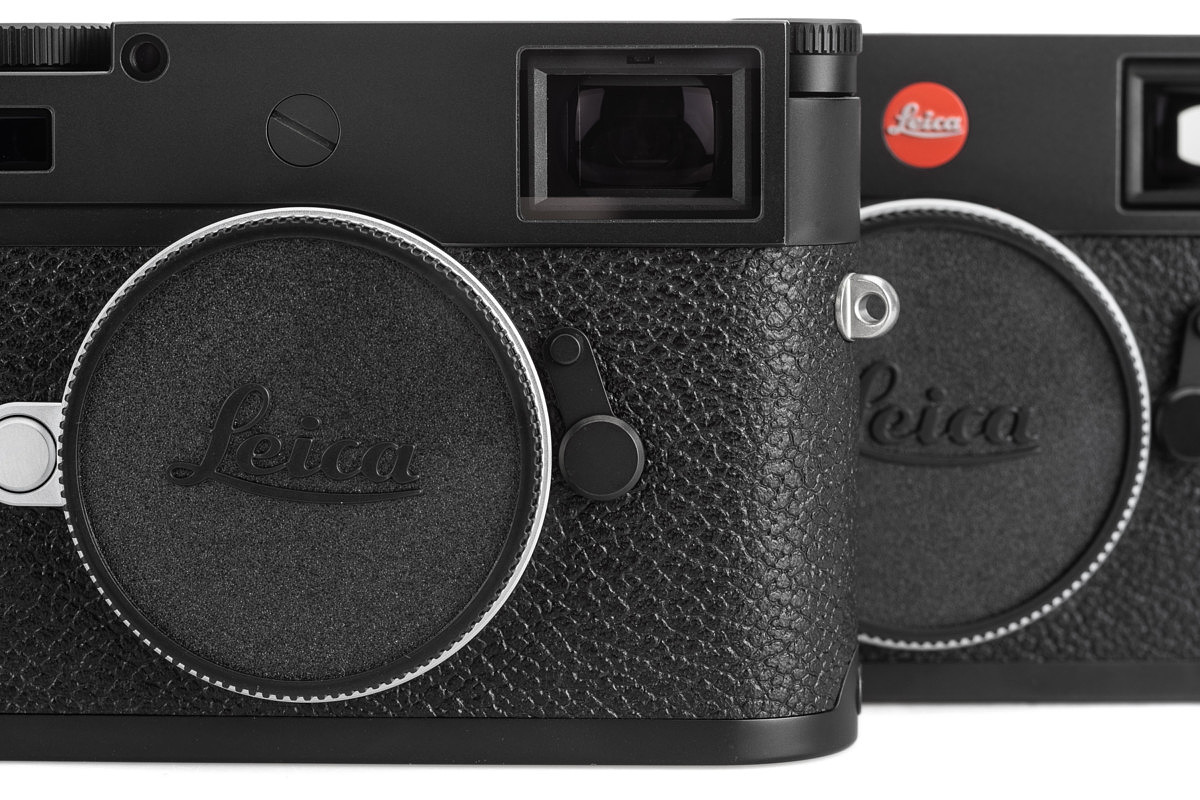 The M10-P loses the classic Leica “red dot” logo as seen on the M10 in the background.

Upping the ante from its predecessors, the M10-P features the removal of the iconic Leica “red dot” logo on the front, but also comes with a redesigned mechanical shutter that is nearly silent, a touchscreen LCD and an integrated spirit level. You’ll notice there is no sapphire glass LCD cover this time, which I suspect is due to its incompatibility with a touchscreen or an effort to maintain the M10’s slim profile. Carefully examining the LCD’s on the M10 and the M10-P, I cannot tell any differences over previous models.  Thankfully, the Gorilla glass LCD cover on the M10, which was used again for the M10-P, has proven to be quite resilient. For those who are a bit more prone to scratching their screens, Leica makes a superb M10 Screen Protector. 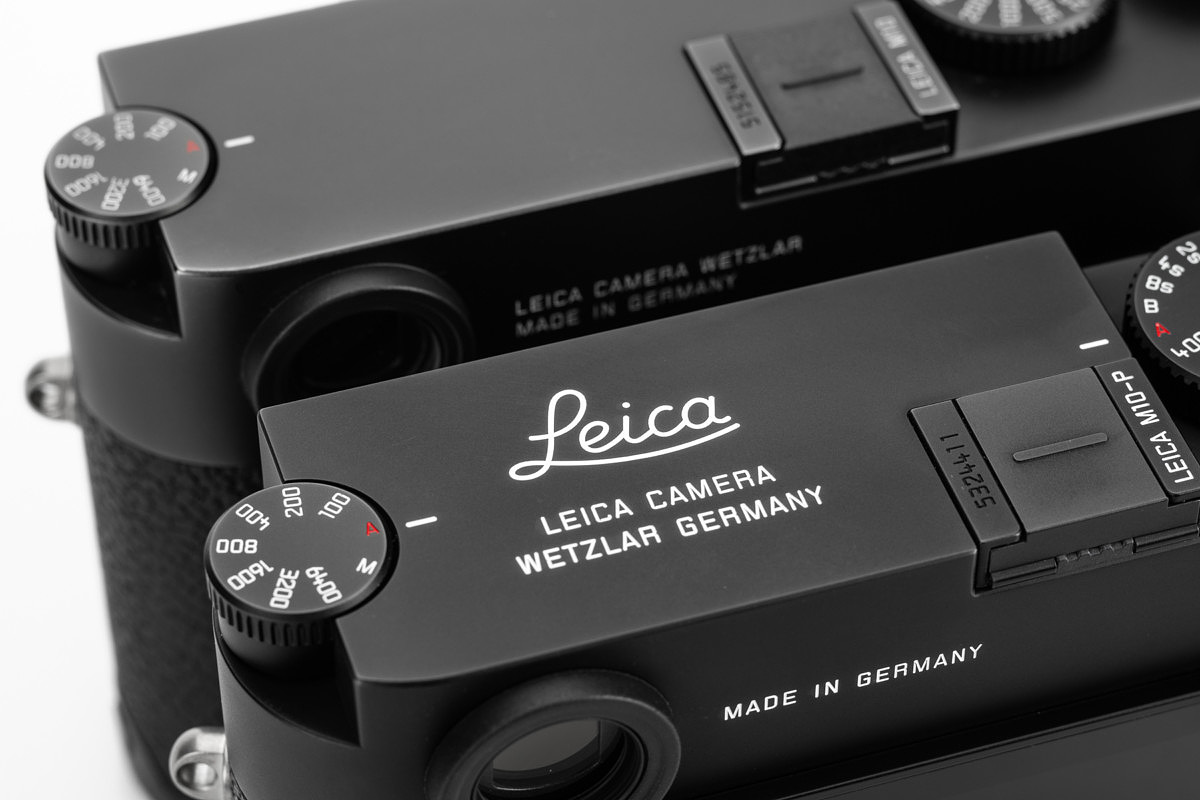 Compared to the blank top plate of the M10, the M10-P features the Leica script logo.

Leica’s official press release for the M10-P sums it up well:

Leica Camera is proud to introduce the Leica M10-P, the newest, most inconspicuous addition to the Leica M series. The new Leica M10-P separates itself from other digital cameras with its almost inaudible mechanical shutter release and omission of the classic red-dot logo to covertly capture candid moments.

Exceptionally discreet, the M10-P embodies the essence of the M philosophy and raises the traditional subtlety of the M series to an unprecedented level. The most notable feature of the Leica M10-P speaks volumes to the core philosophy of the M series, yet it is virtually silent to the ear. At the heart of this camera is the newly designed shutter, making the M10-P the quietest of all digital and analog M cameras ever made. Moments requiring utmost discretion can be captured unobtrusively with the nearly silent, fast and slim M10-P. The design of the Leica M10-P is classically minimalist, featuring only subtle Leica lettering on its top plate, and omitting the Leica red dot logo or any branding on the front. The Leica M10-P, offered in a choice of black chrome or silver chrome finishes is available immediately.

With the M10-P, Leica debuts a touchscreen for the M-System, enabling faster checking of focus in Live-View and Playback modes and convenient contemporary touchscreen controls such as swiping and pinch-to-zoom. The M10-P further assists photographers in capturing a perfectly framed and level shot, thanks to its built-in Level Gauge. This time-saving feature helps photographers get their perfect shot, right at the press of the shutter.

All other features, functions, build quality and finishing of the Leica M10-P match the same high standards of its sibling model, the Leica M10. Rounding out that high-level design, the M10-P also comes with a color-matched metal hot shoe cover, giving the top plate a seamless look and sleek style. Compact, pared down and discrete, the M10-P’s design perfectly reflects the ethos of M cameras: provide photographers the right tools to unobtrusively capture important moments from the rich tapestry of life.

Compared to the M10

Here are a few side-by-side comparisons with the “standard” M10 to really get a sense of what has changed: 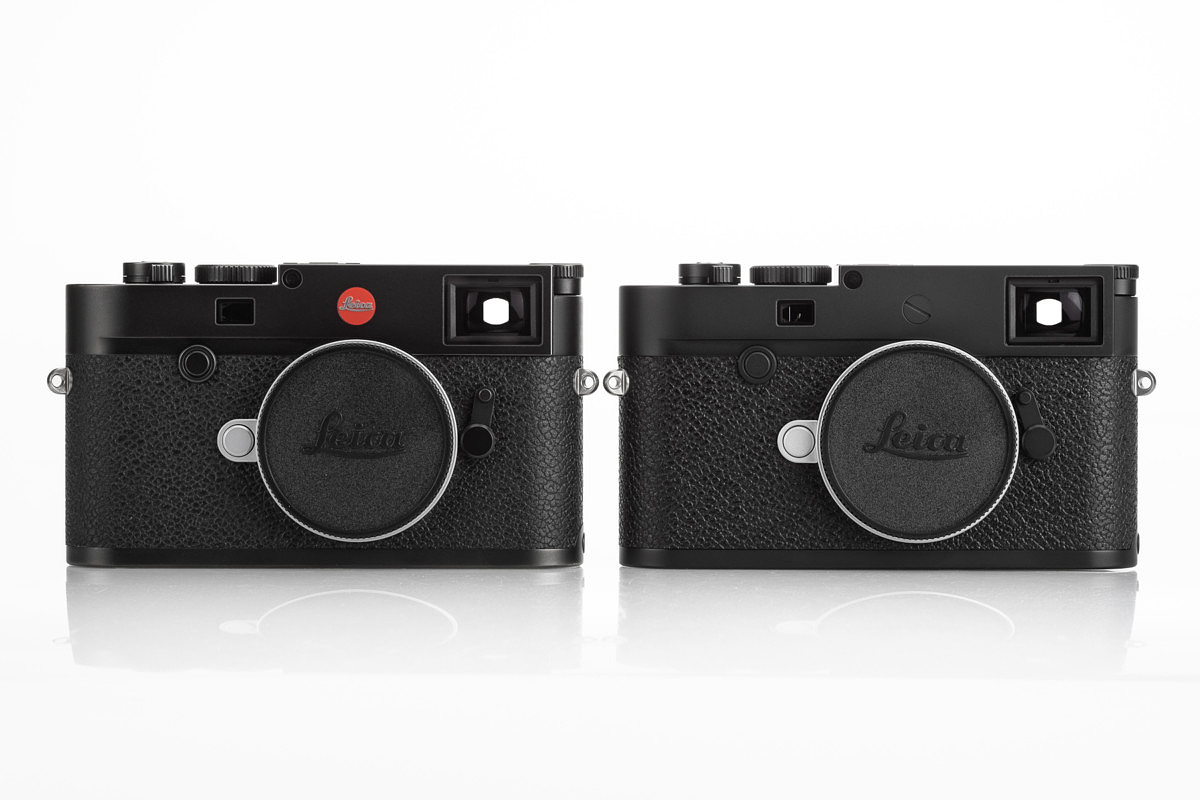 Compared to the M10 (left), the front of the M10-P is nearly the same minus the removal of the red Leica dot logo. 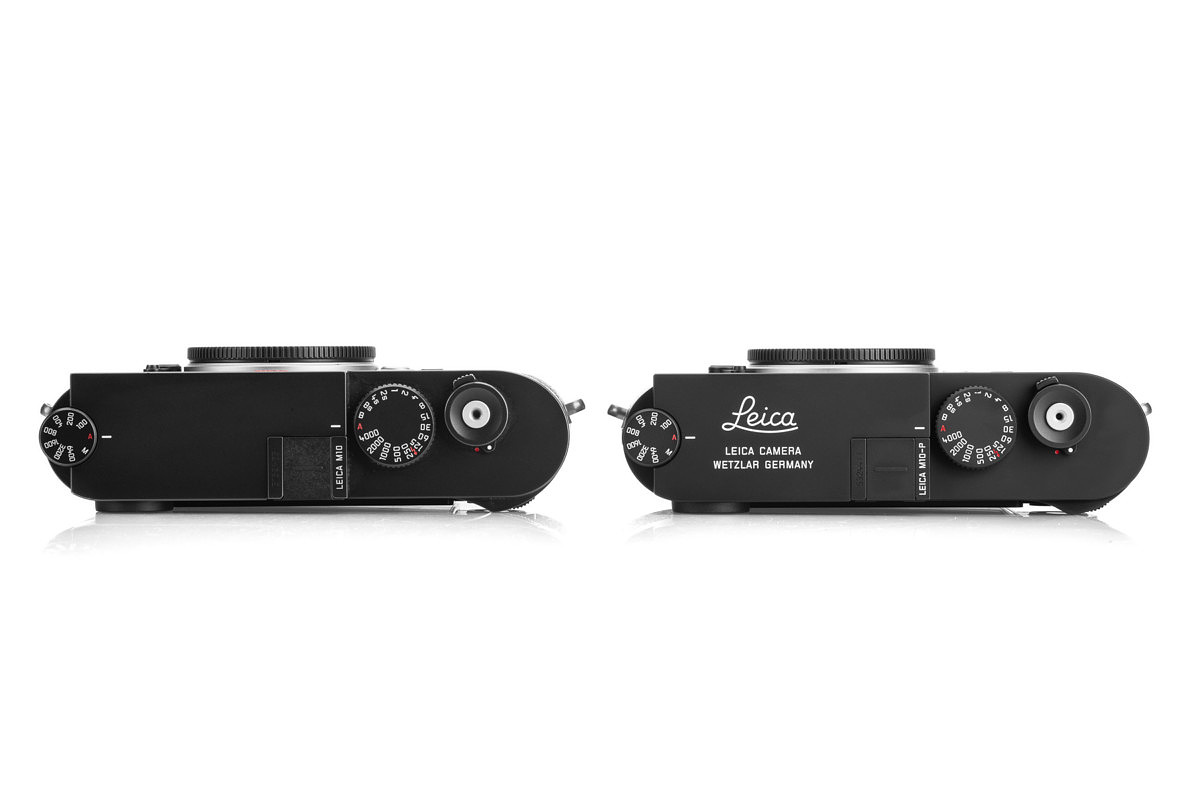 Again you can see how the top plates differ – hard to tell in this photo but the M10-P’s hot shoe cover is metal versus the M10’s plastic. 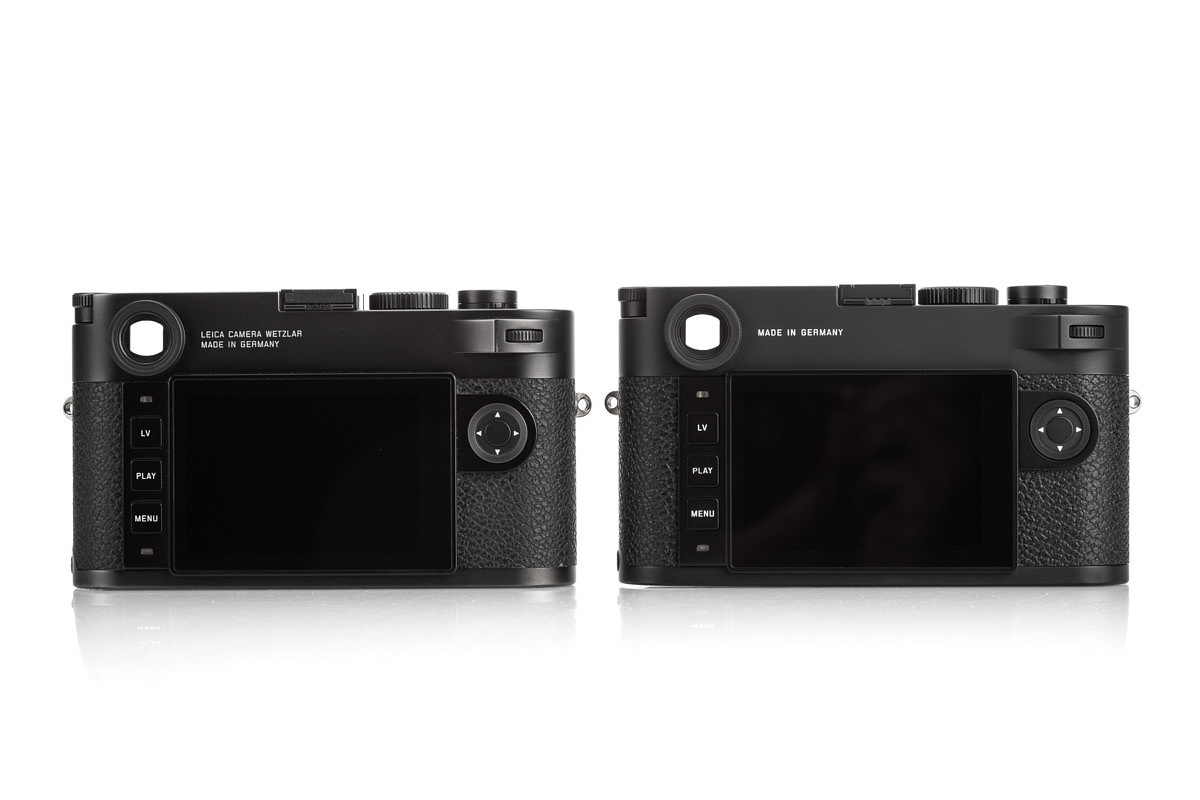 A subtle change on the back of the M10-P is that “Leica Camera Wetzlar” is moved to the top plate engraving, leaving only “Made in Germany” on the back.

From a styling perspective, Leica did not have as much to adjust going to the M10-P as the M10 already has no model designation on the front and blacked-out controls on the back. In addition to removing the red dot logo, there is also the classic Leica script on the top plate, something we had a sneak preview of with the limited edition Leica M10, black chrome finish “Leitz Park Edition” released this June.

The real news with the M10-P is the dramatically reduced shutter noise. In fact, when I first heard the shutter fire myself I almost had to laugh. I simply could not believe how quiet it was. I would go as far to say the M10-P is about the same as the volume level of the Leica Q’s shutter. The same holds true when activating live view. This is by far the quietest rangefinder, film or digital, that Leica has ever made. Short of using a purely electronic shutter (which has its own set of compromises) I cannot imagine a mechanical shutter being any quieter.

I don’t know if I want to say it was “inevitable” that the next M model would receive a touchscreen, but given Leica’s past few releases it does make sense. If you are at all familiar with the way the touchscreen works on the Q, SL or CL the M10-P operates in a similar fashion. You can swipe across the screen during playback to navigate through images, plus pinch (or double tap) to zoom in or out. While using Live View, a tap on the screen will place the cross-hair at that spot for focus magnification. Once you are magnified, dragging your finger around the screen will move around that zoomed-in view. The exposure compensation scale in the menu is also touch sensitive, allowing quick adjustments with just a drag of the finger. 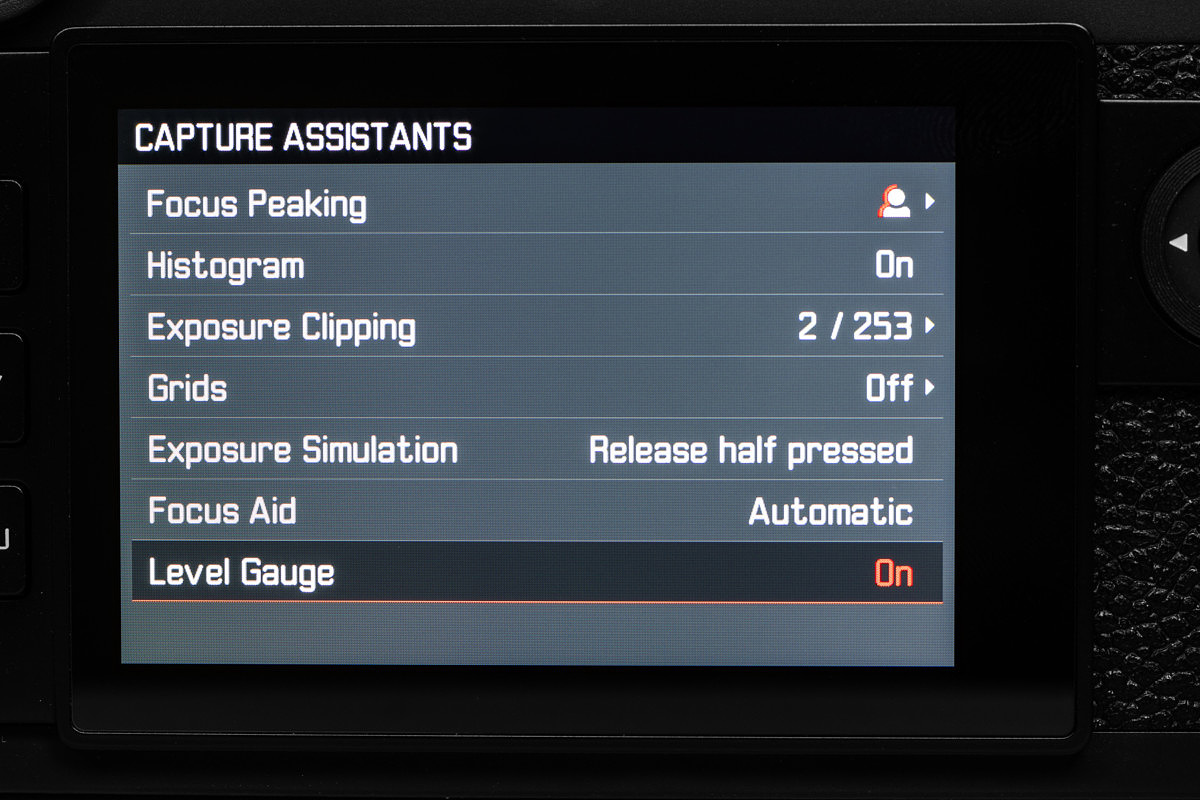 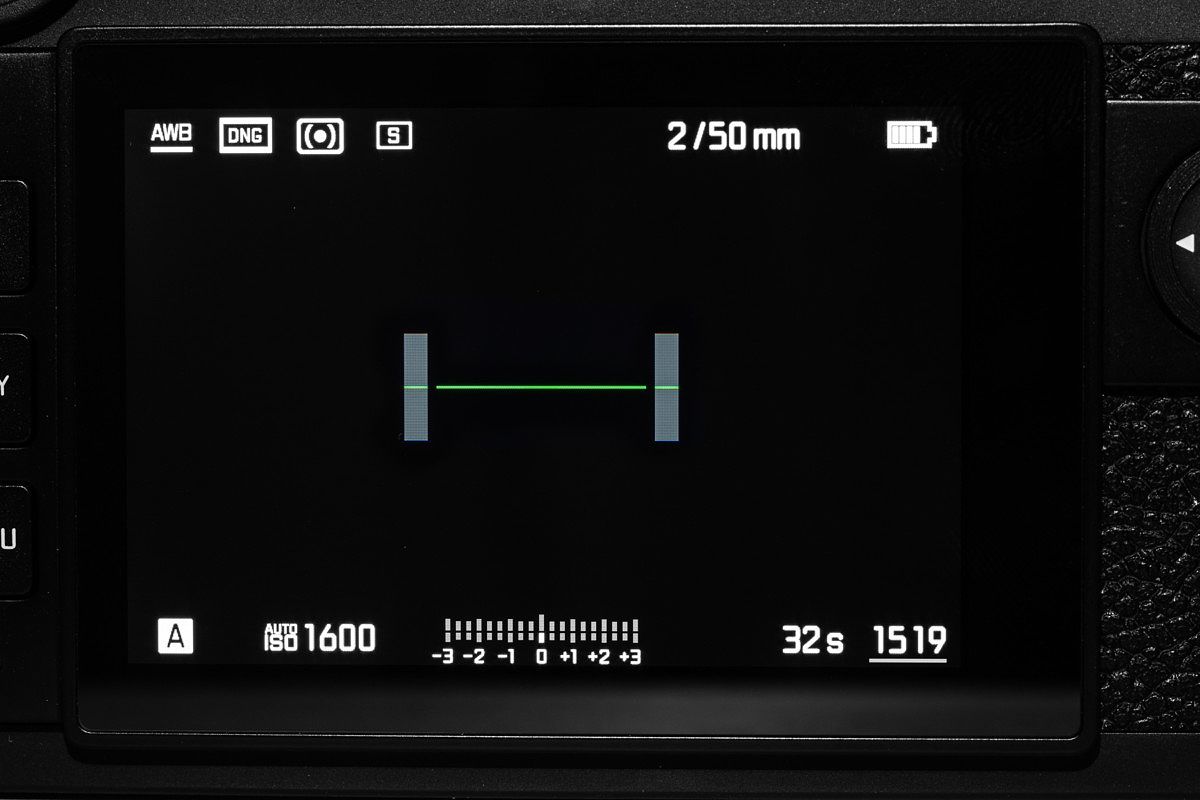 The Level Gauge feature gives you a solid green line when you are level. The large green line in the center is for horizontal orientation and the smaller green lines near the edges are for vertical.

As seen in a number of other Leica cameras, the M10-P includes an integrated spirit level, for a “virtual horizon” display on the LCD screen. It’s quite simple to activate too. In the Capture Assistants menu, there is an option for Level Gauge at the bottom. Turn it to “On” and during live view you will see the level gauge above. The gauge is only visible while using live view (I left the lens cap on for my reference image above to make the level graphic appear more clearly) and you can activate/deactivate it quickly using the round center button in the middle of the arrow keys. Both the horizontal and vertical axis can be leveled. The larger line is your horizontal axis, and the two smaller lines on either side it are your vertical axis. Once both indicators go solid green you know your image will be perfectly level.

As if the major updates outlined above were not enough, Leica literally tops them all off with a classy metal hot shoe cover. Unlike the plastic shoe cover included with the M10, which only came in black, the M10-P’s metal shoe cover matches the body color- silver or black. This looks especially nice on the silver chrome body. For me, this will come off the camera on day one and be stored safely in the box but I can appreciate Leica’s attention to detail here.

For the complete article and additional pictures go here.


Posted by LEICA Barnack Berek Blog at 9:56 AM