MY VISIT TO LEICA CAMERA AG IN SOLMS

Visiting Leica is nothing new to me.  I have done so since the early 70s when I toured the former headquarters in Wetzlar.  I am also among the lucky few that were able to visit the former ELCAN facility in Midland Ontario.  Since the move of Leica from Wetzlar to the nearby town of Solms, I have always taken time out for a visit there whenever I was in Germany.  This year was no different.

Entering the sleepy Hessian town of Solms, it seems almost odd that a company like Leica is headquartered there.  I can well imagine that the close proximity to Wetzlar played a role in selecting Solms for their new base.

Leica is easy to find; there are many white road signs pointing in the right direction.  My visit this time was accompanied with a certain feeling of finality, because I knew it was most likely the last time I would go there.  This fall the new headquarters at Leitz Park in Wetzlar will be completed and Leica will begin their move to their new home which they hope to have completed in spring of 2014.

As is well known, the new facility is of great necessity.  The space in Solms has simply been utilized to the max.  There is no room for further expansion which has resulted in delayed deliveries for many of the Leica products.

Entering the parking lot immediately made me aware of how small the space has become.  In years past I never had a problem finding a parking space.  Not so this time.  There was no space to be found and I ended up parking outside on the street. 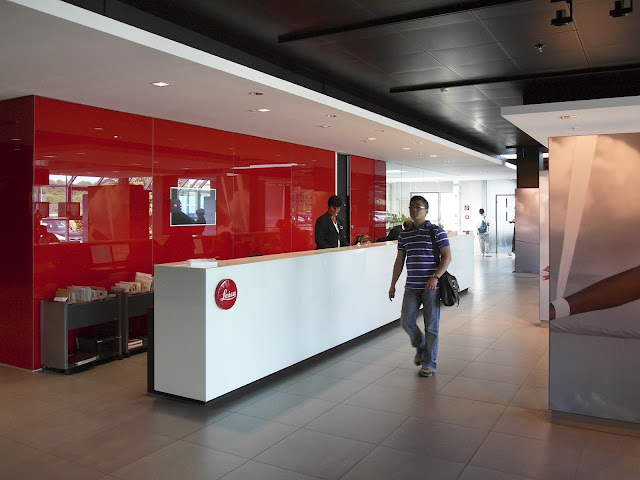 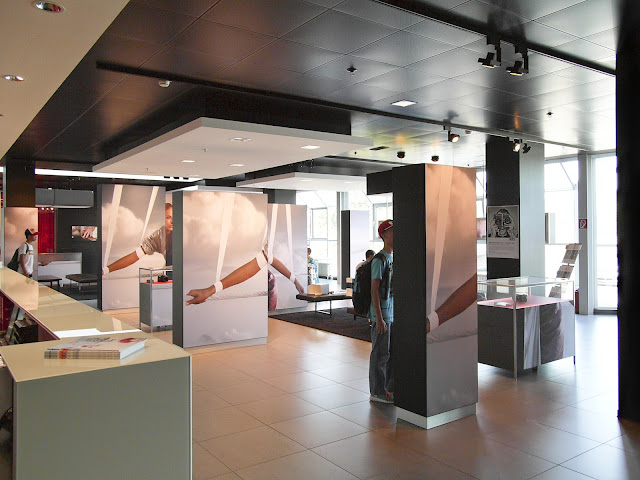 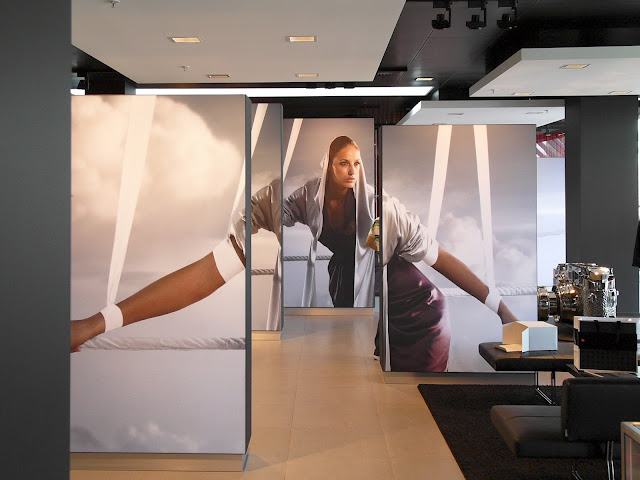 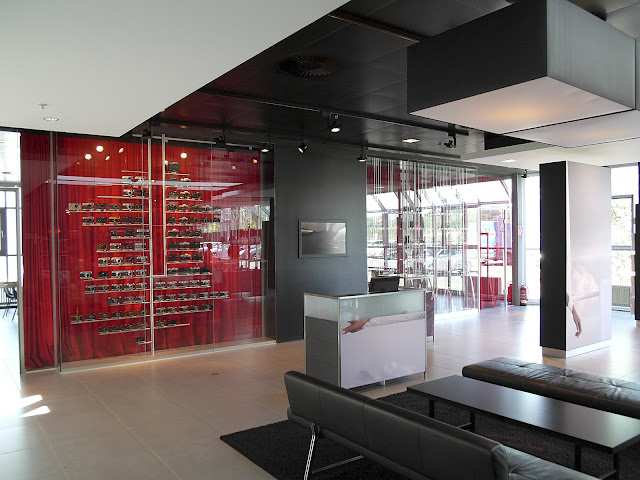 The reception area was just recently redecorated and greeted me with a lot of Leica red and a thoroughly modern atmosphere.  I was asked to wait for a moment since my contact, Andreas Dippel, Public Relations Manager, was in a meeting.  I took the time to look around and take a few photographs.  Besides the showcases with Leica equipment, two items immediately catch a visitor’s eye, one being a huge, chrome sculpture of a Leica, the other being the immense 1600mm f/5.6 Apo-Telyt-R.  I had not seen it before, only read about it.  Pictures simply don’t do justice to the size of this lens.  It is huge!  The chrome Leica sculpture is quite interesting.  At first glance it looks like an M4 with its slanted rewind crank.  But upon closer inspection it becomes obvious that it carries features of many Leica models, including the back of a digital M, M9 or M8.  Even some parts of earlier screw mount Leicas can be found.  And, of course, there is the Leica Stammbaum, the Leica family tree, starting with a replica of the Ur-Leica and on to the latest Leica models.  What is missing is the Leica museum.  All the museum pieces are currently locked away and are being prepared already for the move to the Leitz Park and the new Leica museum. 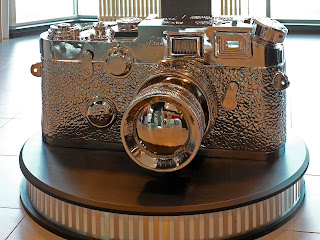 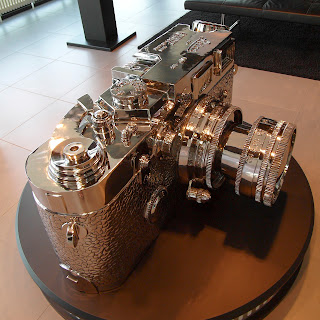 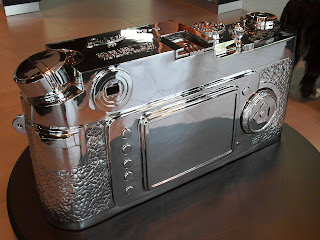 After a few more pictures, Andreas Dippel greeted me and soon we were on our way to tour the factory.  This was definitely beyond my expectations.  I had gone on the standard visitor tours on several occasions before.  But this private tour proved to be substantially more extensive.  I was able to see the production of Leica cameras and lenses to a much greater depth than ever before.  Unfortunately it was not allowed to take any pictures. 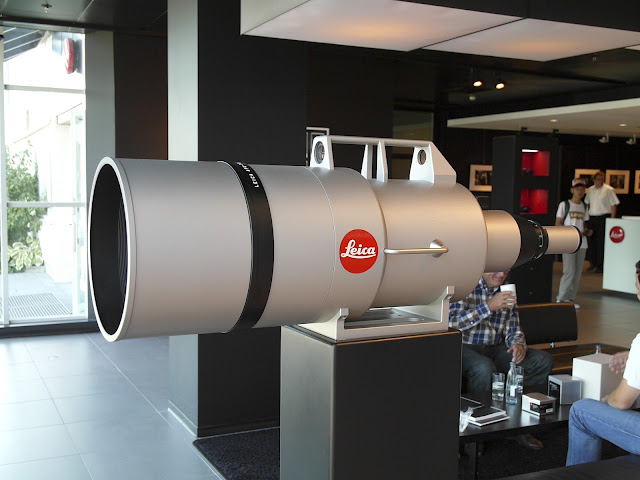 All of the manufacturing areas are clean rooms, protected by a glass wall from the corridors.  This makes it relatively easy to observe without disturbing anything.

Closest to the lobby is the lens production department.  It still amazes me that each individual lens element is ground individually, accompanied by numerous tests.  Only if proper tolerances are achieved is the lens element moved on to the next production step.  I got a close view of the manufacture from grinding of the lens elements, to cleaning and polishing, coating, cementing of lens elements, coating and finally assembly.  During the production of a lens, there are at least as many checks and rechecks as there are steps in the manufacture of a lens.  No mass production here and, along with it, none of the shortcomings of mass production.  This is an absolute necessity to assure that the much tighter tolerances that Leitz specifies are being adhered to, and it is this that sets Leica cameras and lenses apart from their competition. 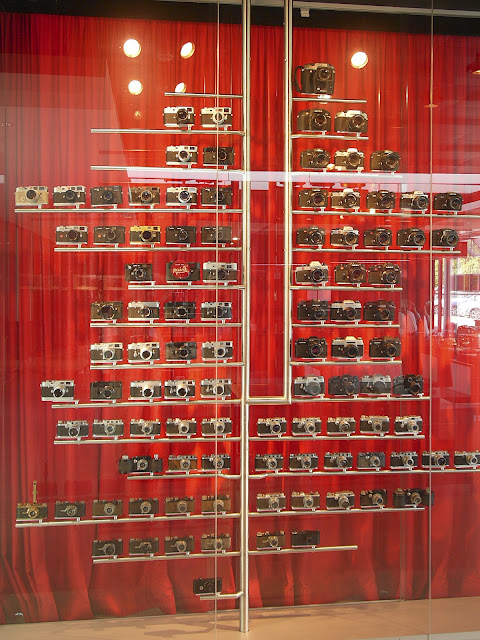 At the end of the lens production line are the machines that grind the spherical elements for many of the Leica lenses.  I asked about the way they are produced, specifically if Leica also uses the molding process like Nikon does.  This was immediately discarded as not accurate enough.  Leica definitely grinds all their aspherical elements from lens blanks.

I witnessed the same methods for the manufacture of the cameras.  Here too each assembly step is immediately accompanied with checks and rechecks.  The rangefinder for the M Leicas alone takes a huge amount of time and effort.  Then, once the lenses and cameras are assembled, each individual item is undergoing a series of final checks before they are sent off to be packaged for sale. 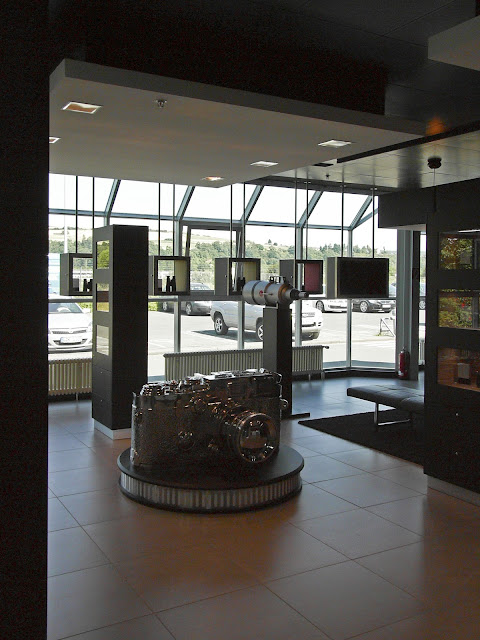 To check the rangefinder, for instance, Leica uses an extremely well calibrated lens, permanently mounted on the testing device.  Each finished camera is mounted on the lens and proper focusing is checked on a monitor.  Even the slightest deviation will result in the camera taken to be adjusted and then rechecked before is goes on to be packaged.

I asked Andreas Dippel if Leicas has deviated over the years from their extremely high standards in terms of optical and mechanical tolerances.  He almost scoffed at the question and assured me that this is something that will never happen.  After all, that would pull Leica equipment down to the level of precision practiced by their mass produced competition.

For more on this topic go to:

LEICA and OTHER CAMERAS
http://gmpphoto.blogspot.com/2012/02/leica-and-other-cameras.html

PRODUCTION NUMBERS OF LEICA CAMERAS AND LENSES VS CANON AND NIKON
http://gmpphoto.blogspot.com/2012/06/production-numbers-of-leica-cameras-and.html

To my surprise, I also got a short insight to the prototype department.  It was obvious that Leica is not sitting on their recent successes with the Leica S and Leica M models.  We can all be certain that Leica is working on new items for the future.  What are they working on?  Don’t ask.

On the way back to the lobby Andreas Dippel stopped at a door to a different department.  I could not determine what was being made there; the windows were all made with a design that made it impossible to see through.  As a matter of fact, I noticed several areas like this within the company.  This was remindful of my visit to ELCAN in Midland, Canada.  Here Leitz was routinely working on classified military projects.  Any observation was strictly forbidden.

After a moment he returned with a finished lens element that had been discarded.  I could see no visible damage or other faults besides a green magic marker note, indicating that the element had to be discarded.  I don’t know what lens this is for, but it will take a place in my Leica collection.

Andreas Dippel had to cut our meeting short by a few minutes because he had a meeting with Dr. Andreas Kaufman, the boss, as he put it.  I told him that I couldn’t compete with that.

Thus ended my last visit to Leica in Solms.  Next time I will visit Leica it will be at Leitz Park in Wetzlar.

MESSAGE FROM THE BLOG ADMINISTRATOR

Some readers of this blog might have wondered about the absence of any new articles for the last four weeks.  The reason is that I was in Germany.  Among traveling and visiting friends and family, I also took the opportunity to visit Leica Camera in Solms as well as the Leica Park in Wetzlar.

I was able to get a personal, in depth tour of the Leica headquarters in Solms which allowed me an insight far beyond that offered to the general visitors of the company. Over the next few days I will give an extensive report of those visits, along with pictures and news from the land of Leica.  Stay tuned!

Posted by LEICA Barnack Berek Blog at 10:26 AM No comments: