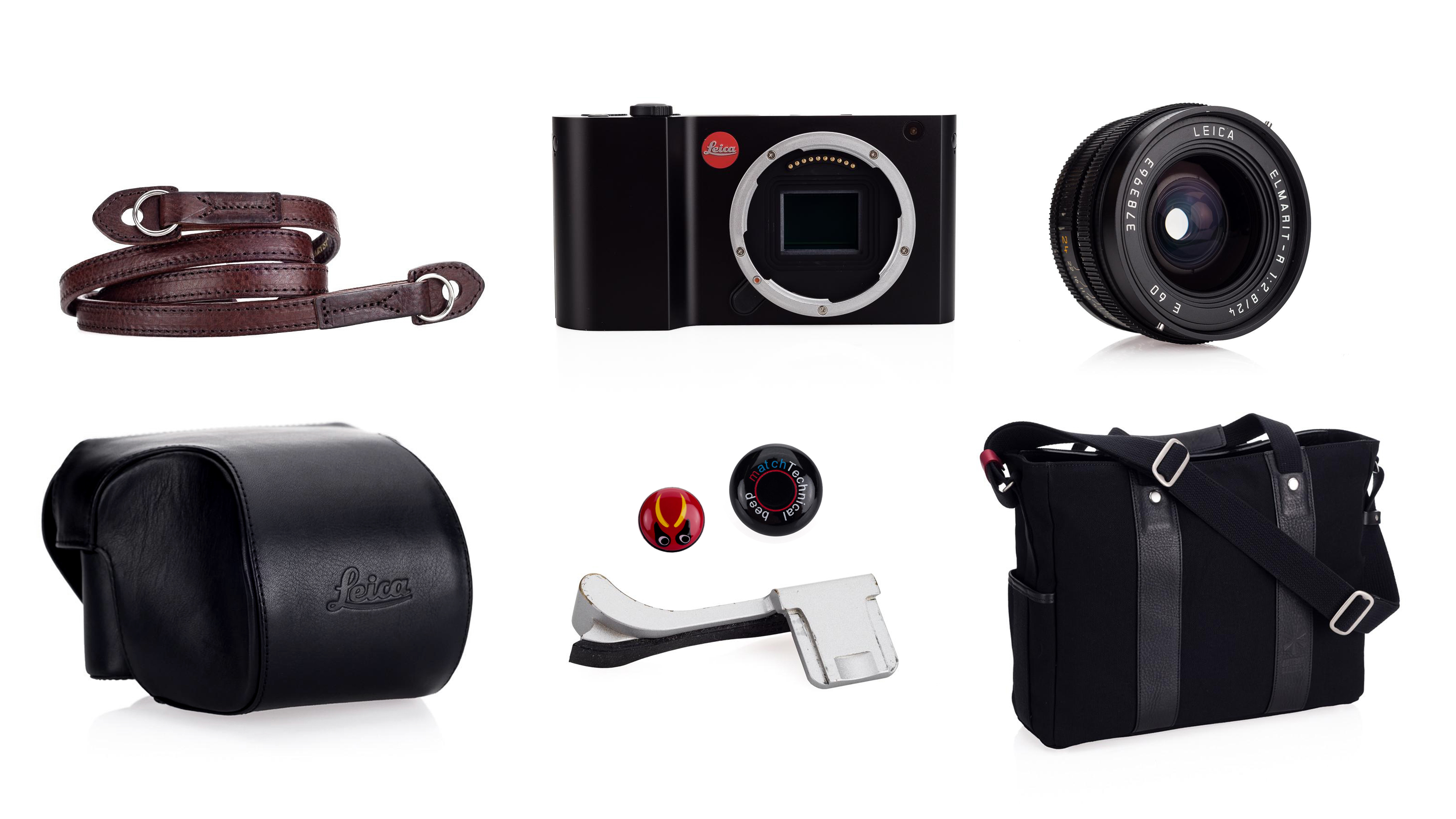 Here is a chance to save on the cost of selected Leica equipment and accessories.  Leica Store Miami is conducting a Labor Day inventory reduction sale, ending Tuesday, September 3 at 11:59 PM.

Take advantage of savings on a variety of new, old stock and used inventory.

Posted by LEICA Barnack Berek Blog at 10:32 AM No comments:

When the first Leica was introduced at the Leipzig Spring Fair in 1925, it was quite a sensation.  It was the first time that such a small, portable camera was capable of delivering professional results.  Thus it is not surprising that other camera manufacturers took note.  As a matter of fact, the entire photographic industry at that time soon got involved to come up with 35mm cameras of their own.

The 1930s saw the first imitations and the first attempts to bring construction standards in line with those of the new small format camera.  While German companies like Zeiss respected the Leitz patents and worked on coming up with their own 35mm camera designs, camera companies from other countries showed much less respect for the rights of the German company of Ernst Leitz.

Especially in Russia, the Leica was at the very front of an industrial venture that was to span a period of over 50 years.  The Leica II with its built-in rangefinder was studied, analyzed and finally reproduced in functional prototypes starting as early as 1933. 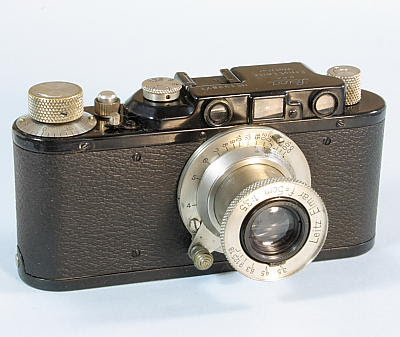 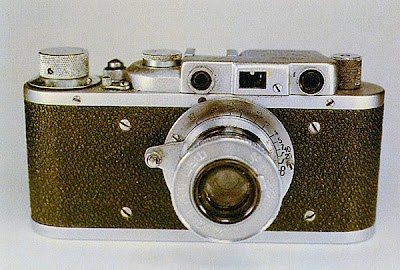 The Leningrad mechanical works were the most advanced in Russia at the time.  They built prototype copies of the Leica under the VOOMP name, while the FAG company in Moscow built a few examples under the FAG name.  Both models were exact copies of the Leica with the exception of not having an accessory shoe.  In 1934 the Leningrad and Moscow prototypes were abandoned and the construction of Russian Leicas began at the FED works in the Ukraine.

While these Russian Leica copies do look very much like a genuine Leica, a bit closer inspection will quickly reveal that these cameras do not approach the overall quality of a Leica.  They usually operate a lot rougher, without the legendary smoothness of a Leica.  But there is one other, sure way to tell if it is a Russian copy or the genuine Leica product.  All one needs to do is to remove the lens.  This will reveal the rangefinder lever of the camera.  While all Leicas have a roller at the end for smooth operation, the Russian copies have only a simple cam. 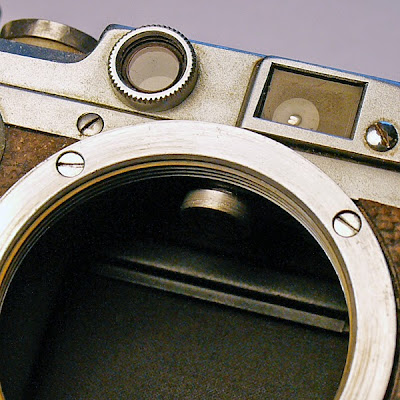 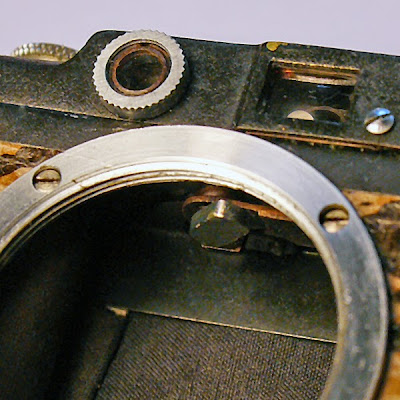 FED with simple cam at the end of the rangefinder lever 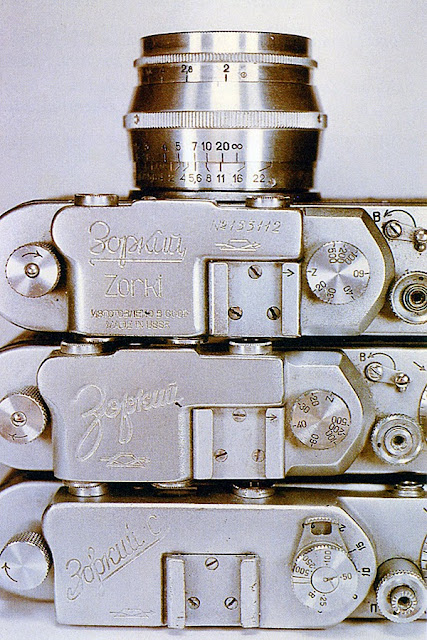 The prewar production of FED cameras was over 150,000.  That included a number of experimental cameras with a top shutter speed of 1/1000 sec. and some had a slow shutter speed dial like the Leica III.  It is thought that some even had a large film capacity of 250 frames, like the famous Leica Reporter. 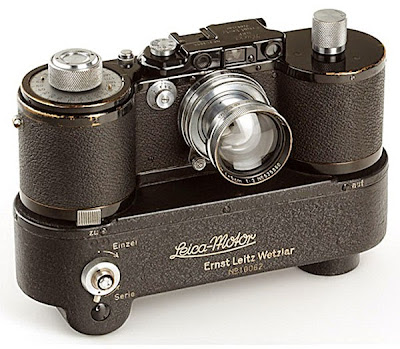 Some of the prewar FEDs were even engraved with the Leica logo on the top plate.  These were meant to be exported to Western Europe.  While the standard FED cameras all were equipped with a 50mm f/3.5 lens, a copy of the Leitz Elmar, labelled as Industar, the lenses for the Leica engraved cameras even used the Elmar designation on the lens. 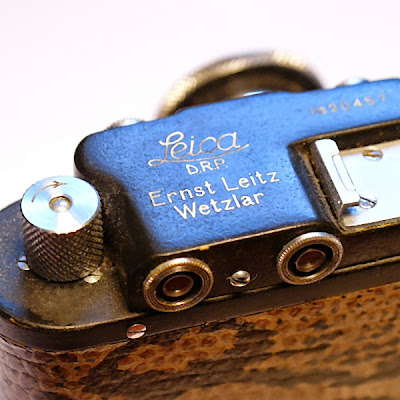 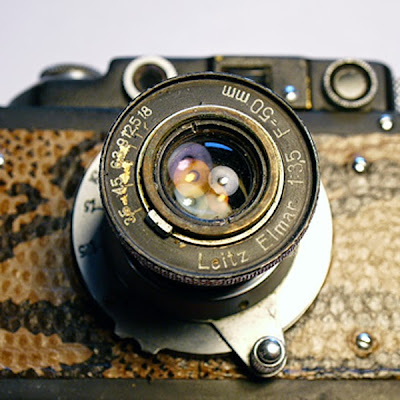 The beginning of WWII resulted in the suspension of the manufacture of FED cameras for the civilian market in 1941.  Production started again in 1946 and went on without any major changes until 1955.

Between 1949 and 1950, about 1000 FED cameras were modified with the Contax type bayonet mount to be able to use the original Zeiss lenses for the Zeiss Contax.  In place of the usual FED inscription, the top plate of these cameras was engraved with a five point star, surrounded by the Cyrillic letters TCBCB.

In 1948 the Krasnogorsk optical works near Moscow started to produce FED cameras.  Initially their cameras were engraved with a combination of the FED and Zorki label, Zorki meaning ”sharp sighted” in Russian.  But after just a few examples, these cameras switched to just the Zorki label.  These cameras were absolutely identical to the FED and they too were produced without any changes until 1955.

In 1954 a variation of the Zorky 2 cameras was made with a short production run of approximately 1000 cameras.  They had an identical camera body as the Leica they were copied after, but were equipped with a long prewar Zeiss Contax style self-timer lever.

During the military occupation of the cities of Dresden and Jena, the Soviet troops removed the entire Contax works and took all machinery back to Kiev.  That led to experiments of combining elements of the Leica and the Contax.  This led to the design of the Zorki 3 which differed from the original Leica copy in many respects.  The Zorki 3 was equipped with a large viewfinder/rangefinder very much like the one in the Contax.  The camera also had a slow shutter speed selector. 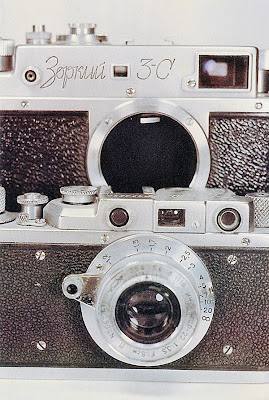 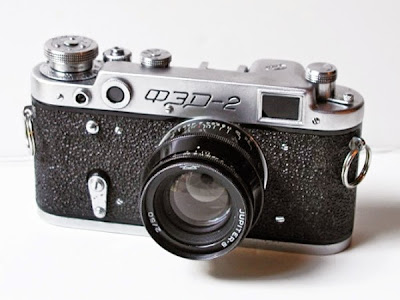 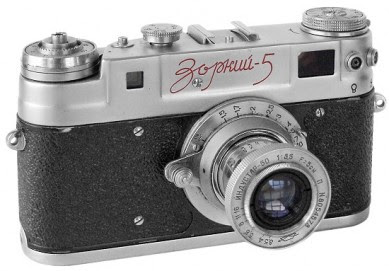 Posted by LEICA Barnack Berek Blog at 8:57 AM No comments: