Almost exactly one year ago Leica introduced the New Leica S3 at the Photokina.  So far none of the new cameras have been delivered and no actual dates have been set so far.  But I thought it might be a good idea to take a look what the new camera will be about.  David Farkas of Leica Store Miami wrote an excellent article about it:

Back at the end of last year, I posted my thoughts and a poll on what the next generation S camera might look like and what features are most important to S users here: Thoughtson the Next Generation Leica S

Overwhelmingly, resolution was the number one request, with most users wanting to see 60 megapixels. Other top wishes included a desire for better high ISO performance and improved dynamic range, while keeping the same speed as the S007. There were also those who saw value in 4K video using the entire sensor area. Interestingly, others felt as I did with regards to leaving the body alone, both to retain compatibility with existing accessories as well as appreciating what a great design is already in place. Now that the S3 has been officially announced, it looks like the major boxes were checked.

At the heart of the Leica S3 is a brand new, Leica-specific 64 megapixel CMOS chip. This new exclusive sensor architecture features improved dynamic range, superior high ISO performance with lower noise, a new color filter array for better color reproduction, and lower power consumption. The camera is still quick with a 3 frames per second shooting rate, down only very slightly from the 3.5 FPS in the S007, and the ISO range has been bumped from a maximum of ISO 12,500 to ISO 50,000. This looks very much like the camera most S users were hoping for. So, kudos to Leica for paying attention and delivering what customers actually wanted. 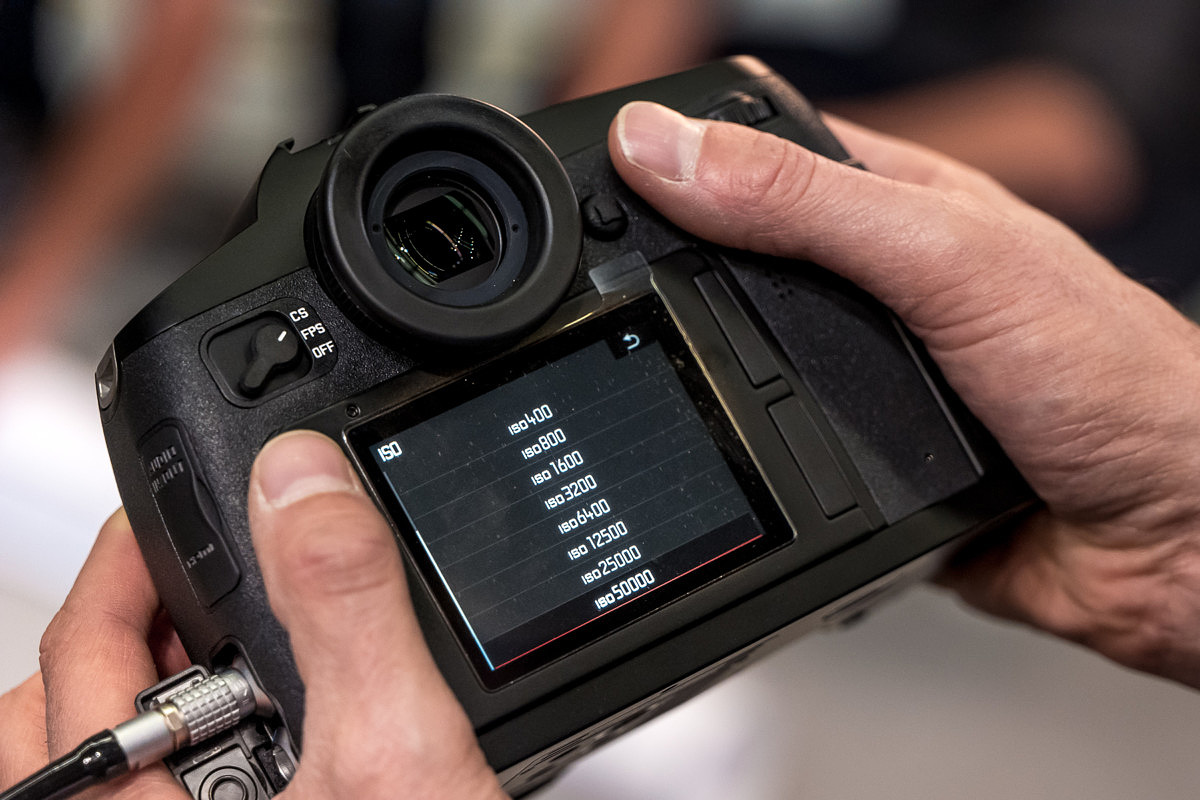 Outwardly, the S3 looks and feels identical to the S007, which isn’t a bad thing at all. The current S body is extremely ergonomic and satisfying to shoot with. I’ve relied on the S system for all my serious landscape excursions for years. The S is a tank, through and through, holding up to some of the most gnarly conditions I can throw at it. Whether standing under a waterfall or laying in the surf, the S just works, turning out breathtaking image quality. And the optical viewfinder is second to none, offering up a clear, bright and expansive view through the stunning S glass. Now, Leica seems to have taken that formula to the next level. 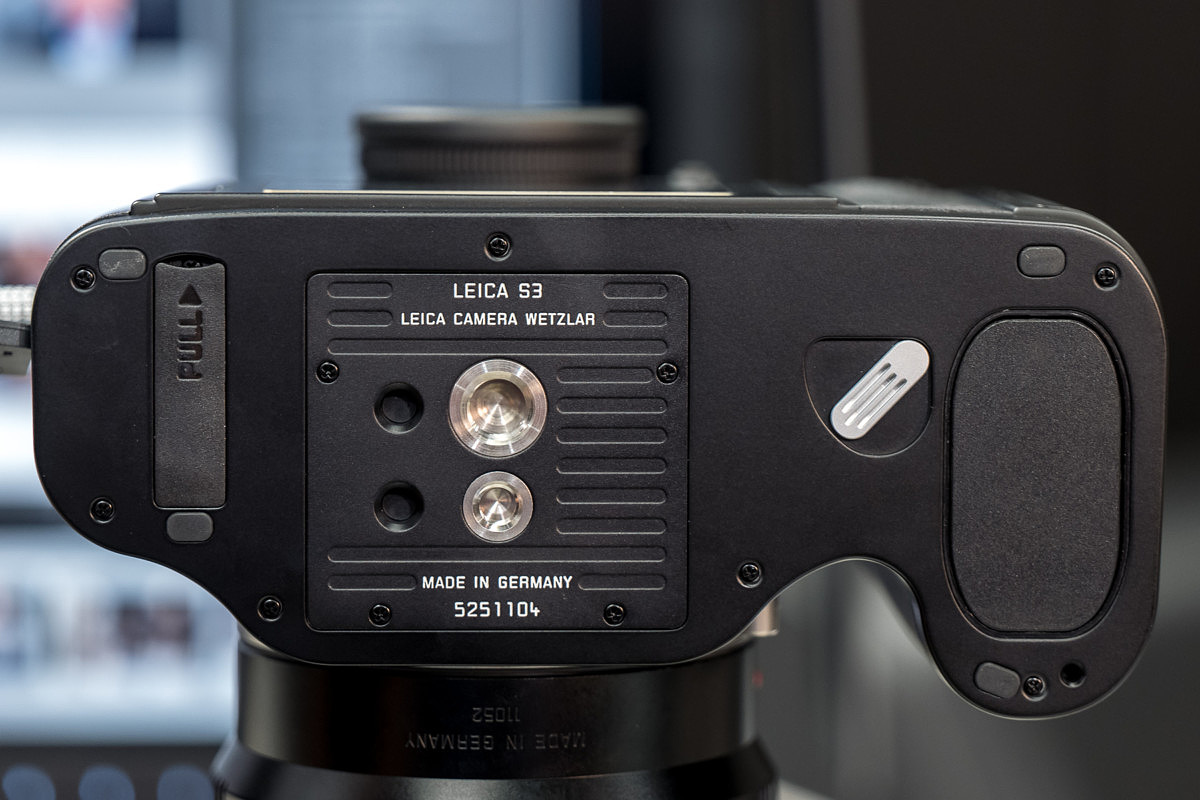 At the show, before my scheduled interview with Toni Felsner, the product manager for the Leica S3,  I had the chance to play around with the camera. Leica had numerous working prototypes placed around the booth and in the back press room. They also had a small photo studio set up where you could shoot the camera tethered to a computer running Lightroom. All the memory card doors were glued shut. Yes, I checked. A this point Leica doesn’t want anyone sneaking off with files before the camera’s processing algorithms are fully baked. 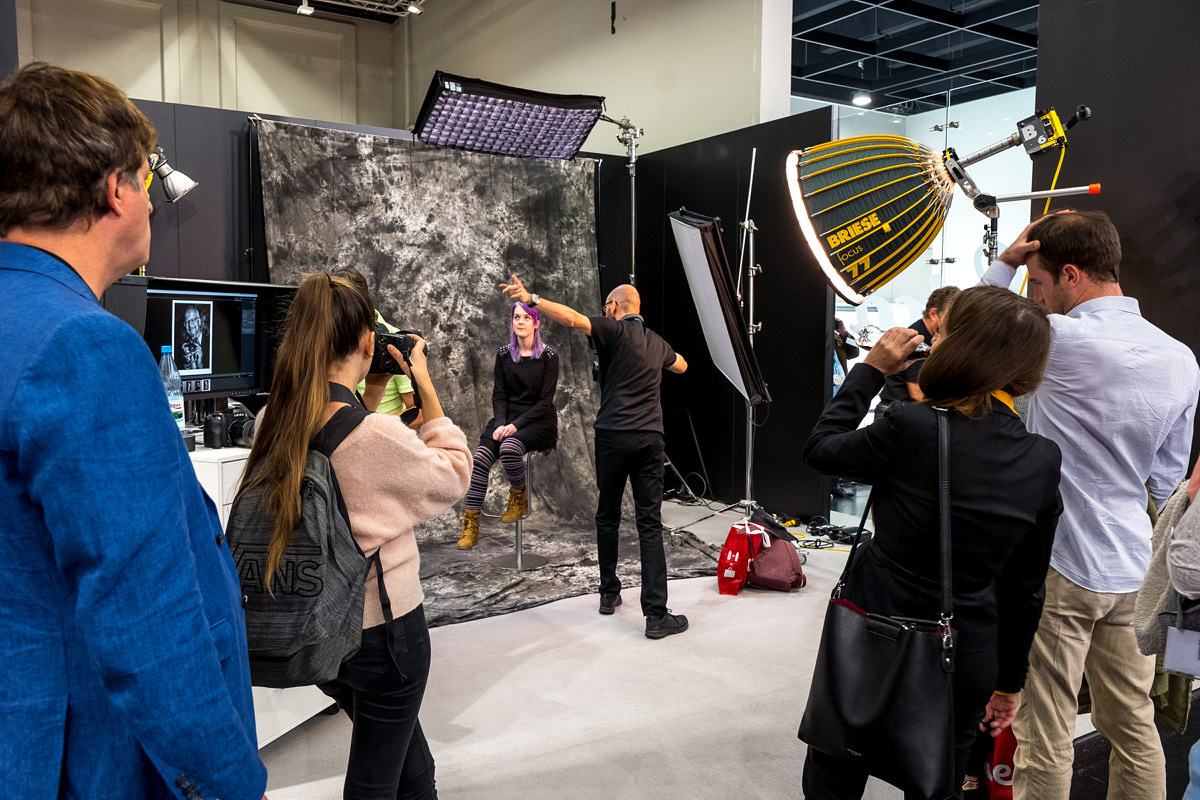 But, I can attest that the cameras all work perfectly, and that the resulting images on the LCD screens and during tethered shooting looked great. I was able to zoom in to 100% on the LCD, which was just about as quick as doing so on the S007. This was one of my concerns with putting so many more megapixels into the camera, but speed doesn’t seem to be an issue here. 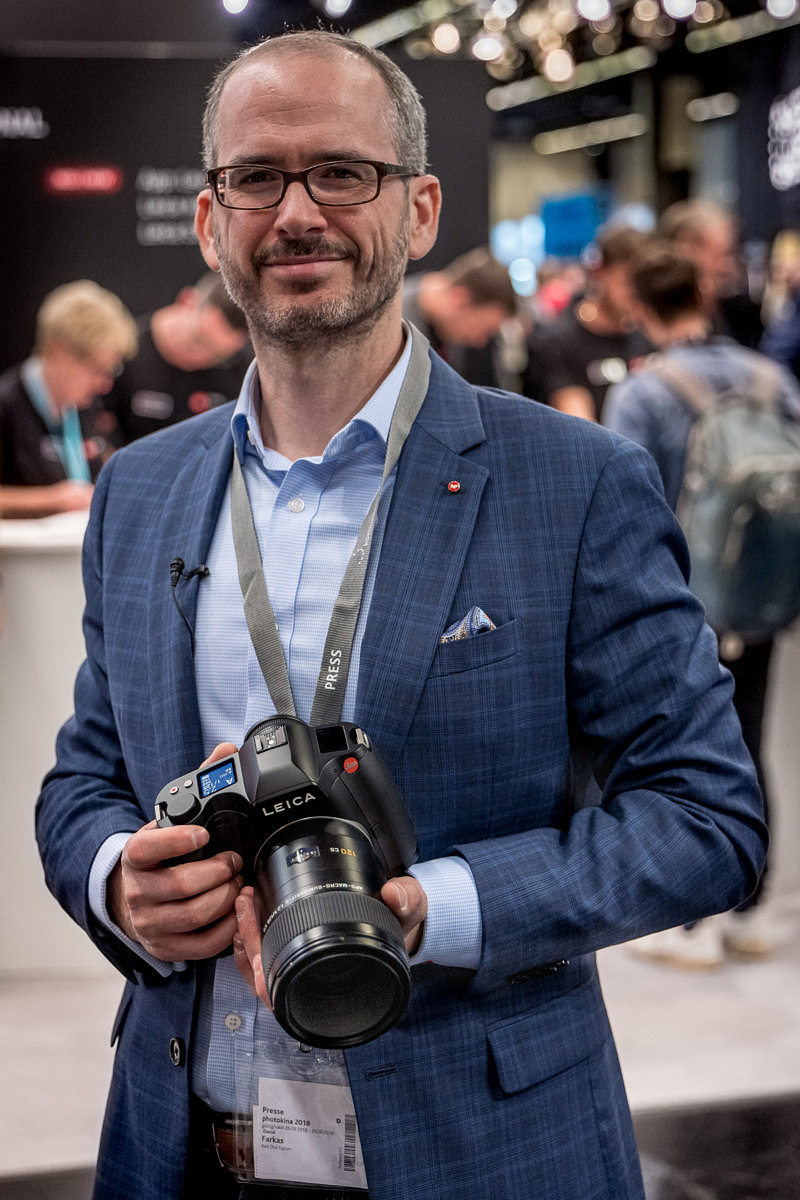 Can I keep it?

Remember, the Maestro II image processor in the S3 can churn through 320 megapixels of raw file data per second. That’s still enough capacity to render and display five images per second at 64 MP. So, even though we’re not seeing a new generation of processor, Maestro II was designed with ample headroom. Honestly, there wouldn’t be much benefit here shifting to a new architecture. 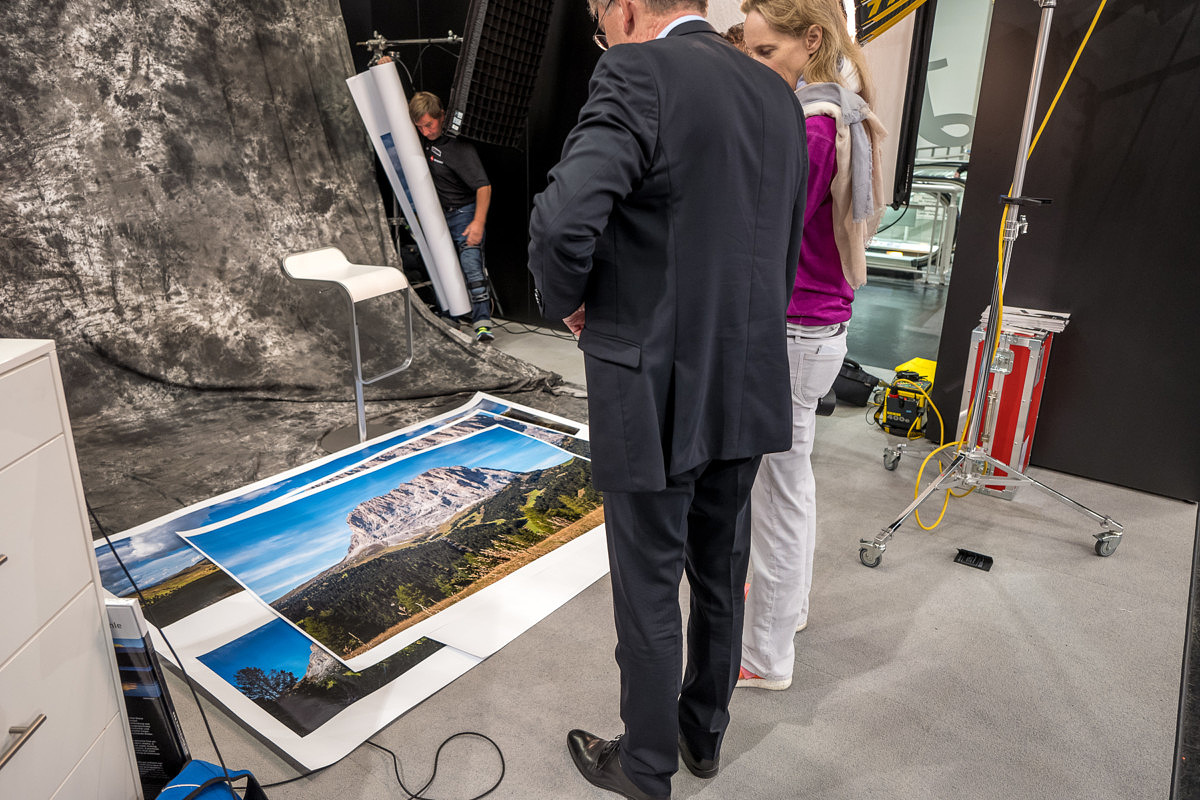 Big prints from the S3

I checked out some massive prints from the S3 that had to be rolled out on the floor. These handheld landscape shots were incredibly sharp and detailed. I got down on the floor to scrutinize them and I still couldn’t find any fault. The level of resolving power between the S lenses and the new sensor is impressive, to say the least. 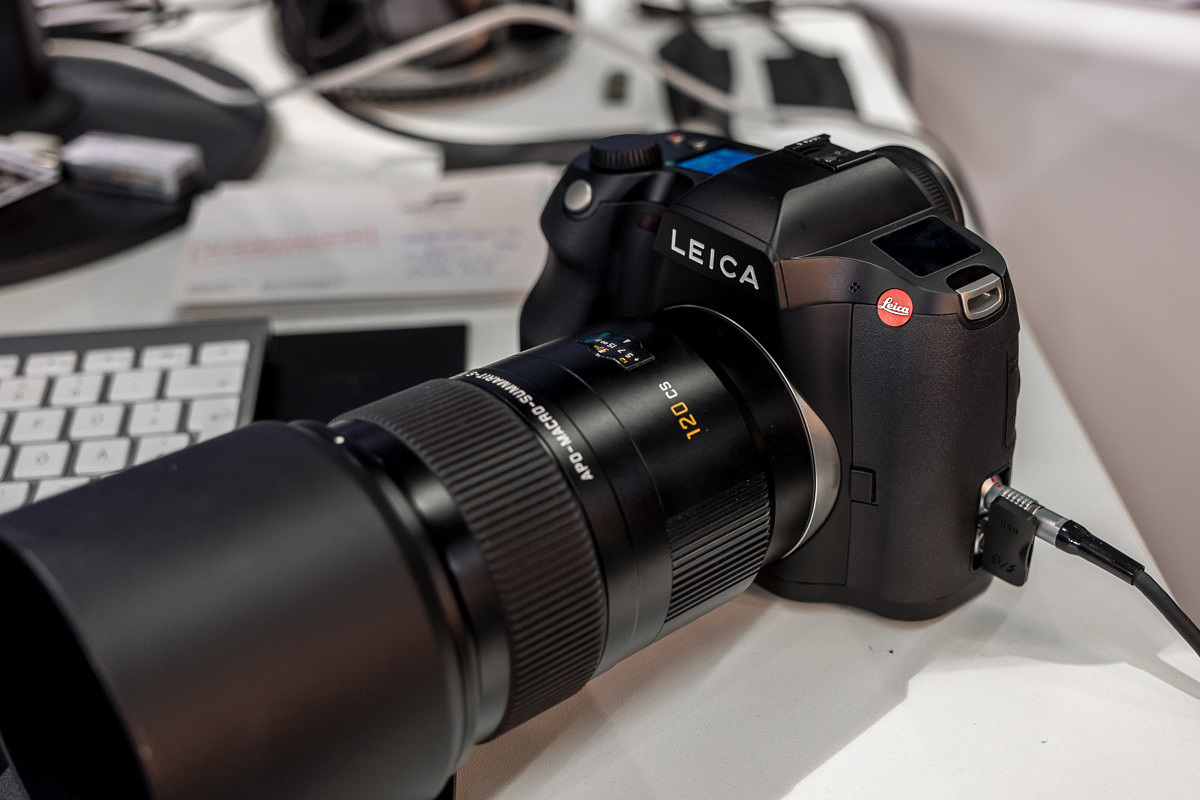 The following day, I had the chance to chat with Toni Felsner, product manager for the Leica S3. Toni and I have known each other for the better part of ten years, back to the early days of the S2. 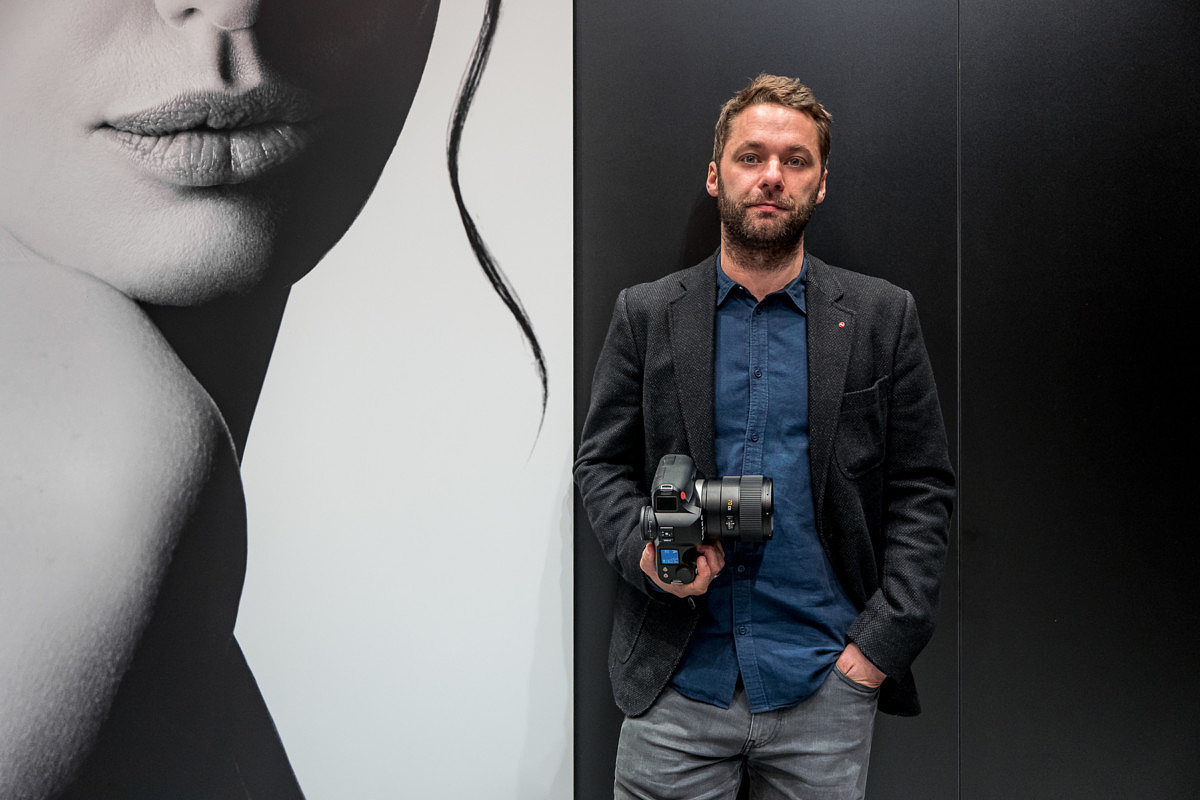 DF: Hey Toni. Thanks for meeting with me to discuss the S.

How’s the show going so far?

Great. Lots of interest in the new S3.

This show is significant for the S, isn’t it?

It’s actually been ten years since we launched the S System. We’ve had three generations of S camera. We’ve delivered 16 major firmware updates to our customers. We now have 16 S lenses in our portfolio, six of which have central shutters. And now we’re very excited about the S3 launch.

What has changed for the S3?

Primarily, we have changed the sensor, increasing the resolution from 37.5 to 64 Megapixels while improving overall image quality.

Is the sensor adapted from another Leica product?

No, this is a completely new design, made specifically for the Leica S3. You will not see this sensor technology in any other camera.

What about a low pass filter?

No, we only have an IR filter glass over the sensor. A low pass filter would reduce resolving performance, so we don’t use it.

Conventional wisdom says that as resolution increases and pixel size decreases, dynamic range and high ISO performance suffer. Is this the case with the new sensor in the S3?

Absolutely not. We stayed at 37.5 megapixels for as long as we did in order to focus on delivering maximum image quality. Top DR. Excellent high ISO. But, sensor technology has evolved and we are now able to achieve both an increase in resolution and, at the same time a two stop improvement in noise performance, and even greater dynamic range than the S007.

Wait. Better dynamic range than the S007? With over 15 stops of range, the S007 is incredible. It’s changed the way I approach landscape shooting.

Yes, we are going to be able to offer even more. Wait until you see it.

That’s incredible. Any other cool tech on the sensor side?

So the sensor features a dual gain structure, which allows us to maximize higher ISO performance. In our test shooting, ISO 6400 looks super clean. Almost no noise whatsoever. And, the noise profile on the files at even higher settings looks less like noise, and more like grain.

Also, we implemented a new color filter array, which is going to offer really amazing color. We will tune the output for skin tone, but it will work extremely well for a wide variety of applications like landscape, architecture, fine art, etc. You’ll especially see an improvement in the red channel, which has always been challenging for digital photographers when photographing bright reds, like automotive paint, or flowers in the sun.

Clearly, you were focused on image quality. Did you think about any other criteria when you were developing the camera?

I’ve noticed that some of the mirrorless competitors can run a little warm.

Yeah, this is one of the reasons why we feel it is best to stick with the DSLR form factor. We have absolutely no problem with dissipating heat, and this allows us to not sacrifice any quality.

Would you consider bringing out a mirrorless in the future?

Sure. We would certainly take a look. We, of course, listen to our customers and hear this request. But, we will not do it if it means sacrificing absolute image quality. This is always our top priority. If the technology becomes available, we would certainly be open to this idea. Right now, we are completely focused on the new S3 and optimizing image quality before delivery.

And what about the video features?

We are able to offer 4K video across the entire medium format frame, which is a first. So you get to keep the look of the still photos. No crop on the lenses. Same Leica look and color between stills and video.

How about the speed? The S has always been one of the fastest medium format cameras on the market since the S2. With so many more pixels to deal with, will this effect the speed, either with regards to frame rate, or review?

So, we were able to keep the speed up with fast Maestro II processing. The frame rate only drops slightly from 3.5 fps on the S007 to 3 fps on the S3. This is still extremely fast for medium format. Do keep in mind, though, that we are still using a buffer size of 2GB. With the larger files, they do take up more space, so instead of the buffer depth of 12-15 shots on the S007, the S3 will only have 6-7 images before the buffer fills. It does clear quickly, in about ten seconds when completely full, but we think that this is still okay for most users.

Playback and operation are very similar to the S007. Here, we still keep the camera very responsive and nice to work with.

The camera looks great. When can we expect it to be available?

Our plan is to start delivering in Spring of 2019. We still have some things we want to optimize, but the quality is already outstanding and quite promising.

Would it be possible to for customers with the S007 to have their cameras upgraded to the S3 by Customer Care?

We did consider the possibility of an upgrade program, but because the entire camera would have to be taken down to its base components and rebuilt like a new camera, with full calibration and alignment, along with the cost of the sensor and supporting technology, the cost would be quite high. We figure that most customers will find it more economical to trade-in or sell their current camera.

And what about pricing on the S3?

We will announce the final price as we get closer to the release of the camera.

Thanks so much, Toni. I can’t wait for the camera. 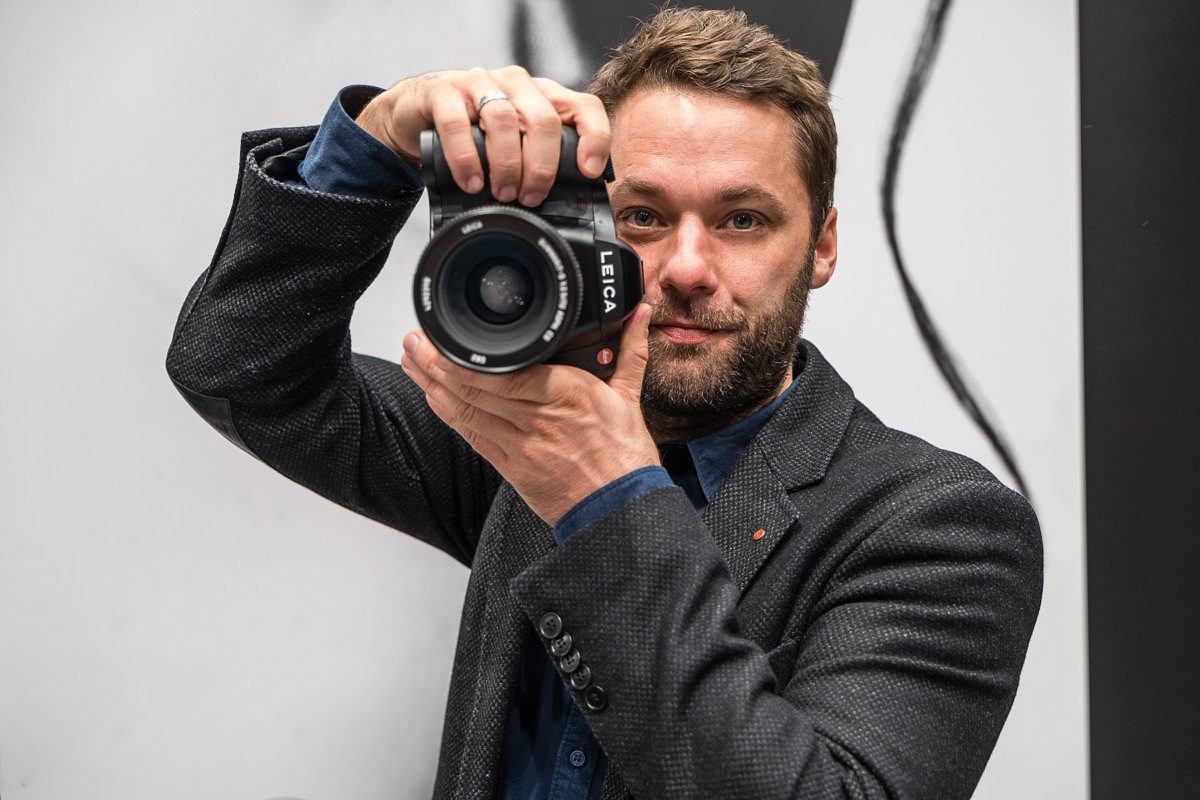 Posted by LEICA Barnack Berek Blog at 10:48 AM No comments: