IS THIS A "LEICA" BEFORE THE UR-LEICA?

A Leica enthusiast sent me four photographs that appear to have a close resemblance to early Leica cameras.  But there are no visible engravings and the pictures were not accompanied by any explanations.  To the contrary, the sender was wondering what we are looking at.

My first thought was that it might be the exposure testing camera that Barnack built prior to the UR-Leica, the camera that recreated his interest in a camera that takes small negatives.

One thing that points strongly in that direction is the fact that this camera has no apparent means to change exposure times, something that was unnecessary with motion picture cameras since they had a fixed exposure time of 1/40 second.

On the other hand, looking at the back of this camera, it appears to have a rectangular image size extending along the length of the film.  As a matter of fact, the entire camera appears to be laid out like the UR-Leica, which already covered the standard 24 x 36 mm frame size. 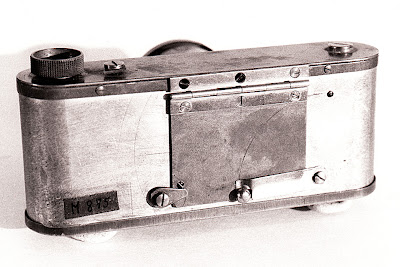 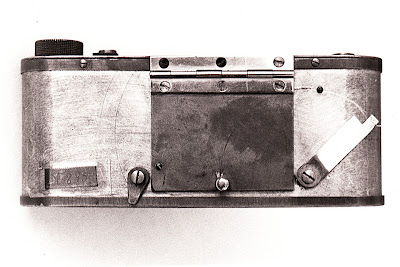 Rear view of the camera.

We do know that Barnack experimented with several lenses in order to find one that adequately covered the negative and one that could do so with adequate sharpness.  This camera obviously has a very crude, but quick way to attach a lens.  The round opening visible next to the leans mounting tube seems to be in a dark slide which apparently could protect the film from being exposed when another lens was attached.

After inspecting the pictures and after giving this matter some thought, I tend to look at this as a crude testing device for a variety of lenses rather than Barnack’s exposure testing camera.  Nothing that I have ever read has given even the slightest hint that this was the case.  I am simply applying some logic, and that does point in a direction other than the exposure testing camera because there was no reason to design that with a negative size larger than18 x 24 mm.  There was also no reason to run the film horizontally as is obviously the case here.

Even though there is no information available on this camera, I am rather certain that we are looking at a Barnack design.  There are too many design similarities to dismiss it as something made by someone else.  The screws holding the top cover and the apparently removable bottom plate are classic Barnack.  In addition, the large screws protruding from the top plate on the right and left side of the camera are very much the same as similar screws visible on the Ur-Leica. 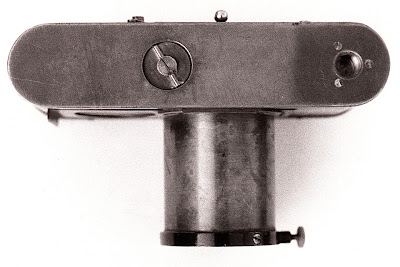 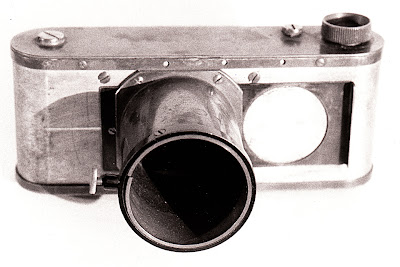 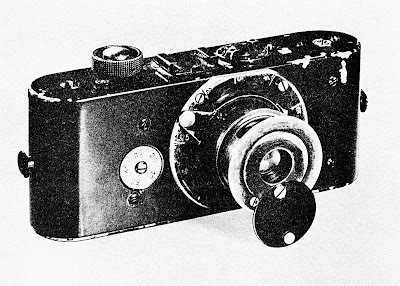 Ur-Leica.  Please note the large srews on the left and right on the top plate,
very similar to those on the unknown camera.

If anyone has any other information or thoughts on this, I would greatly appreciate hearing about it.

Since I wrote the article, I have been able to verify that this camera is indeed a Leica product.  One reader even sent me a picture which shows it on display at the Leica Museum in Solms.  It must be a new addition because on my past visits to Leica I have never seen it.  I am planning to be in Solms in a few months.  At that time I will make sure to obtain as much additional information as possible and then pass it on here.