It was 70 years ago that Alfred Eisenstaedt took this iconic photograph of a sailor kissing a nurse with his Leica on V-J Day in Times Square in New York City. 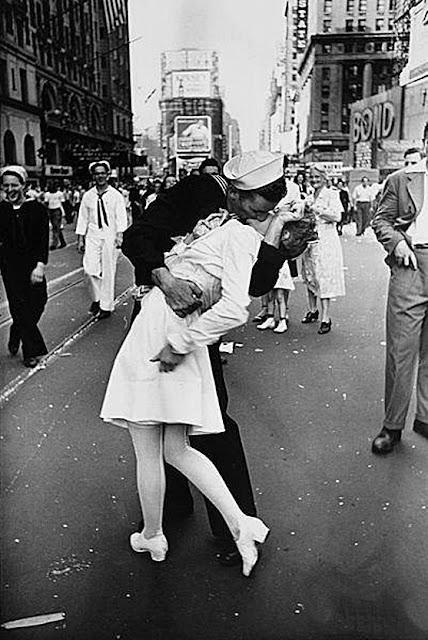 After decades of dispute, the couple in the 1945 photograph were revealed to be 89-year-olds George Mendonsa and Greta Zimmer Friedman.

Now the couple who won the nation's heart, reunited in the location of the famous smooch to reflect on the photograph that came to symbolize the end of the war.

“It was the moment. You come back from the Pacific, and finally, the war ends,” Mendonsa told CBS.

Mendonsa told how he was on a date with another woman named Rita Petry at Radio City Music Hall on August 14 when news of the Japanese surrender was announced.
“They stopped the show and they said, ‘The war is over. The Japanese have surrendered," he recalled.

Mendonsa spotted a woman in a nurse’s uniform - he left Petry and rushed to grab her.

“The excitement of the war being over, plus I had a few drinks,” he told CBS. “So when I saw the nurse, I grabbed her, and I kissed her.”

“I did not see him approaching, and before I know it, I was in this vice grip,” Friedman added.

That moment was eloquently captured by LIFE photographer Alfred Eisenstaedt. It rates among his most famous photographs.