ODDITIES FROM PHOTO AND LEICA LAND

It is granted that hand cameras are indispensable for such as street views, or on the beach, or on shipboard, but they are decidedly out of place for use as picture producers.  Therefore let us oppose all attempts to popularize the use of hand cameras at our photographic outings, the high standard of pictorial excellence to which landscape photography has attained being in great danger of reduction by the use and abuse of hand cameras.”

I think we should all be glad that Oskar Barnack did not read this.

“Can I help you please?”

“Yes, could you please put this roll of film into my camera?”

The customer hands over the most expensive 35mm camera at that time.  A moment later everything is done.

“Excuse me, Sir, I don't mean to tell you how to take care of your camera, but I couldn't help notice that your lenses are rather dirty.  All the extra performance that you spent so much money for certainly gets lost that way.

“Oh no, that's alright.  Someone who knows told me the best way to keep a lens clean is to lick it...”

We pass along an article from LEICA POSTAL PORTFOLIO NEWS:

I should relate, albeit briefly, a little incident that happened in the shop a few days ago.  A customer (new to us) handed us a colour negative film for processing with the comment that he thought few of the pictures would 'come out', but even the bad ones required printing.  Accordingly we marked the order “print regardless' and tactfully inquired if we might help with any problems concerning his picture taking.

He told us that he had been taking pictures off the TV screen but that he did not think his flash was sufficiently powerful.  We explained that the more external light that fell on the front of the TV screen, the less the actual television picture would be visible – but we distinctly got the impression that he did not quite believe us.  Somehow he appeared to doubt our expertise.

“Anyhow,” he said, “even if I had not used the flash, they still wouldn't be any good.  I couldn't change the focus setting on my camera as fast as the TV camera crew did with theirs.  I simply couldn't keep up with them.”

We did not press the point...

Did You Know That...

...The US Air Force, for their top 35mm camera, used the Leicaflex for many years?

...and that a special production run of Leica M4s, dubbed the KE-7A, was made for the US Army?

The KE-7A was accompanied by a special instruction book which even included a special section on how to destroy the camera in case of capture by the enemy.  It was an intriguing process.  The first suggestion was simply to try to break it with a hammer, shovel, or other blunt instrument.  Apparently they realized how well built the cameras were, because the instructions continued, saying that if none of the first methods succeeded, to use explosives like dynamite. 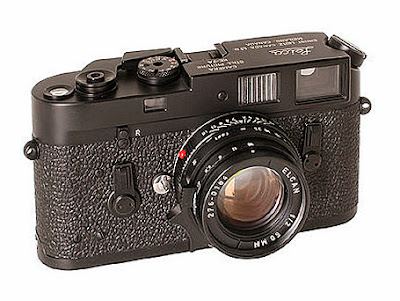 At Jay’s Cameras in Minneapolis:

“If you don’t mind my asking, sir, what kind of camera do you use for this?”

“That’s interesting.  How do you take your pictures?”

“Easy. I just take the sheet film and throw it up into the air where it will pick up heavenly images.”

… and finally, the story of Pyro:

John was a student of mine when I was teaching photography.  Not any of my best students, but he made an effort.  One day he proudly reported of having sold one of his pictures to a local paper.  He explained that he had come across a garage fire, which he took some pictures of and that one of them was published.

A while later there was a repeat.  He was able to publish another picture, this time of a house burning.  I asked how he managed to be so lucky.  His explanation was that he had a police scanner which enabled him to learn about any such incidents.

John graduated.  He came to visit occasionally, but was soon forgotten until one day one of the custodians asked me if I had a universal key to the student lockers.  Apparently John had never vacated his locker.  A police investigator was interested in seeing what negatives and photographs might be in there.

I opened the locker and we found several binders with negatives.  Nothing special until we found several negatives of a garage.  The photographs obviously had been taken at the very same time.  They showed a row of pictures of a typical, inner city garage.  Then, about half way through the roll of film, there was smoke and finally a fire which eventually engulfed the garage, ending with fire trucks and firemen extinguishing the fire.

The police investigator explained that they had found a business card with John’s name on it.  He also explained that John was not unknown to them, that a few years earlier he had set fire to the church his mother attended.

We have called him Pyro ever since.