LEICAS THAT NEVER REACHED THE MARKET

No camera in history has influenced photography as we know it as much as the Leica has.  Not only was it the Leica that established 35mm photography as a viable, professional photographic format, it also allowed the creation of a totally different style of photography, a style that allowed to shoot virtually instantaneously and thus capture true to life photographs like never before.  Photo journalism as we know it would never have happened without the Leica.  Not only that, but the Leica also gave other manufacturers the impetus to design, build and market competing cameras.

Subsequently much has been written about the Leica company and its products over the years.  Many people are familiar with the original prototype Leicas, the UR-Leica and the preproduction models which preceded the first Leica that reached the market.  However, little is known about the development of cameras that Leica built and tried, which never did make it to the market.  Anyone who ever visited the Leica museum will have noticed a variety of Leica Versuchsmodelle (test cameras), which present a fascinating insight of the Leica cameras beyond what is generally known.

These cameras go back almost to the very first days when the Leica reached the photographic camera market.  Oskar Barnack, ever looking for improvement, was the first to try different approaches and variations of his initial creations.

Almost as soon as photography was invented, as soon as the first pictures were made, people looked beyond the flat, two dimensional pictures, to create more lifelike pictures.  This lead to stereo photography soon after the basic photographic processes had been invented.

Thus it is not surprising that Oskar Barnack looked at stereo photography as well.  He designed a stereo Leica in 1935 which essentially was a stretched version of an existing Leica with two lenses, the Doppel Leica (double Leica).  Besides the two lenses, the camera also had two shutters which were released simultaneously when the shutter release was depressed.  The film advance was modified such that after each exposure the film was advanced two frames.  The two lenses were 35mm lenses with the viewfinder positioned exactly between the two. 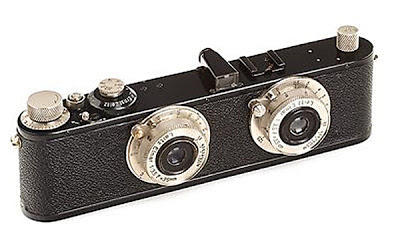 Another one of Barnack’s experimental cameras, also made in the 1930s is a panorama camera.  The lens was connected to the camera with a bellows and a clockwork mechanism allowed the camera to pivot about its axis. 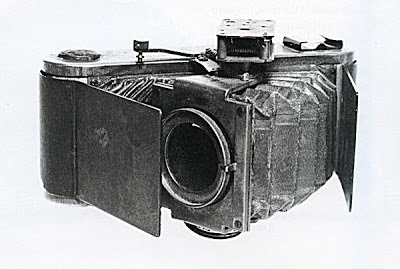 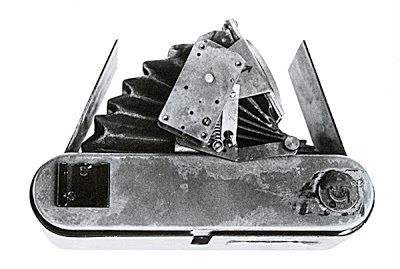 At approximately the same time, an experimental body was designed with a two-lens turret which allowed two lenses to be mounted simultaneously and to be easily switched from one to the other by simply turning the turret. 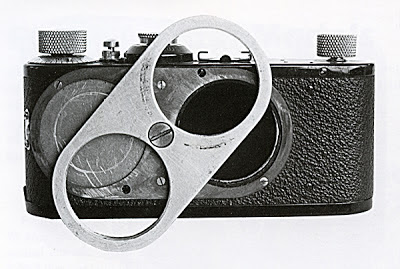 Another camera of that time was the Leica 250 which allowed being loaded with film for 250 exposures.  This camera is relatively well known since it was marketed for a short time.  It also included an electric motor for more rapid film advance.  Another prototype of this camera does exist with a tall body design which features a completely flat top plate with only the shutter release, shutter speed dial and an accessory shoe attached.  Why this departure from the standard model was made is unknown. 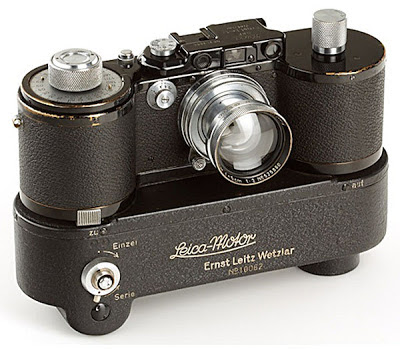 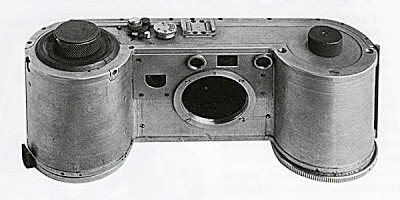 The Leica 250 was accompanied in 1934 by another, long roll prototype, the Leica 75.  It was built to investigate if there was enough interest on the camera market for a camera with an extended length of film for 75 exposures.  The camera was based on the Leica IIIa and was the only Leica ever besides the 250 that had cassette to cassette film advance. 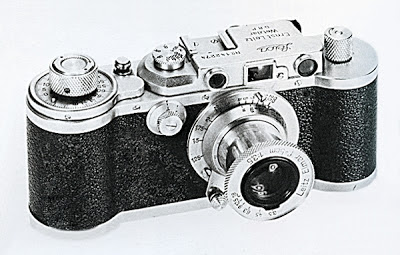 Another camera designed at the same time period was a Leica II with an opening back to facilitate easier loading.  This design too never reached the market and an opening back was not to be seen until the introduction of the Leica M3. 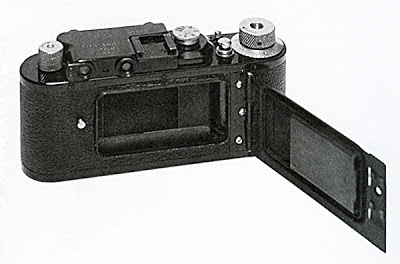 Leica II with opening back

In the early 1950, so called half frame cameras gained a certain popularity and Leica explored the market with the Leica 72, a half frame version of the Leica IIIa with a negative size of 18mm x 24mm.  A few of these cameras were made in Wetzlar, but the vast majority of the cameras sold were made in the Leitz facility in Midland, Ontario.

Since a half frame design takes up less space, Leitz designed two cameras specifically for the half frame format.  This resulted in the Leica Box from the early 1950s.  Even more streamlined was the Leica H from 1959.  This was a beautifully made camera with automatic exposure control.  The most notable feature was a folding lens, very much like on the Minox EL.  It allowed the lens to be folded into the camera body when not in use.  Even though it was never confirmed, it is thought that the Leica H design resulted in the development of another camera at Leica, a design that was later transferred to Minox in Giessen, only 20 miles from Wetzlar 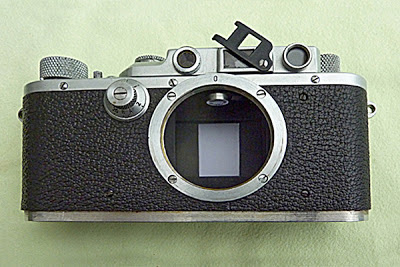 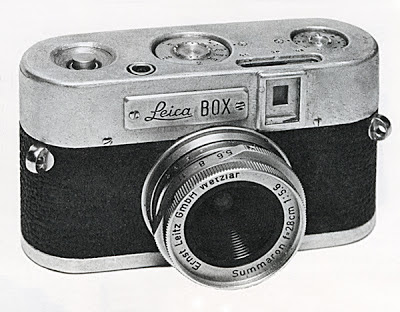 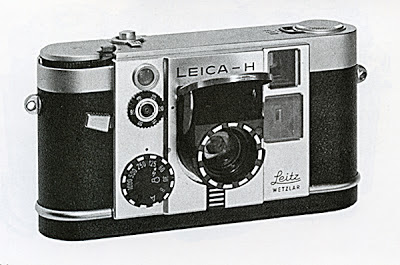 In the early 1950s Leitz developed an even smaller camera for use with 16mm motion picture film.  This camera was designed to use a special cassette for the film to allow instant loading, not unlike the Kodak 126 and 110 Instamatic film cartridges.  It is interesting to note that this development took place before Kodak introduced the 126 Instamatic. 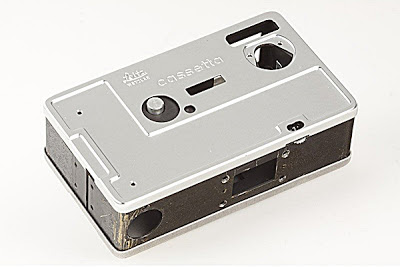 Further development of this principle resulted in a camera that came the closest to being marketed by Leitz.   Initially it was planned to introduce the camera at the 1974 Photokina in Cologne, but further market research indicated that it was an inappropriate camera for Leitz.  The camera was the Leica 110, utilizing the Kodak 110 film.  Even sales literature had been printed and Leitz, together with Agfa even developed a 110 slide projector which was marketed by both companies for a short time.  The Leica 110 was without a doubt one of the most sophisticated and best performing 110 camera, and a number of people still question the last minute decision not to market the camera.  Slides taken with the camera on Kodachrome 25 were of an absolutely fascinating quality. 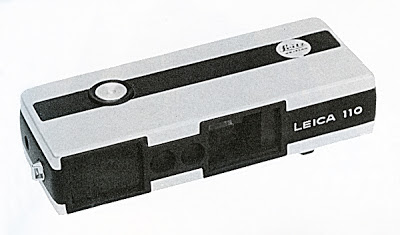 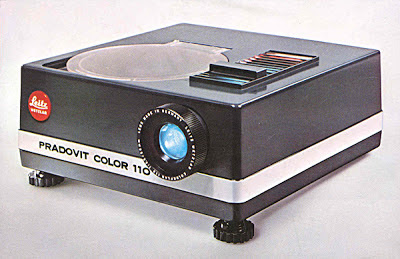 How serious Leitz was about the 110 format is further shown by a technical drawing from a patent filed for a 110 zoom SLR camera.  It is unknown if any experimental models were ever made, but it is an interesting design for sure. 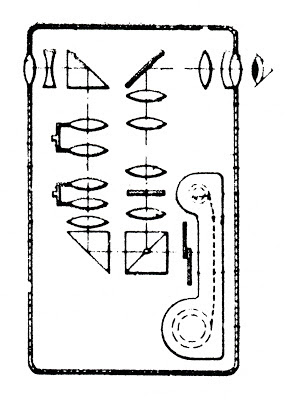 Besides the original Leica prototype, the Ur-Leica, one of the most significant developments in the history of Leica was the Leica M3.  It came about from the need to have easier interchangeable lenses with a viewfinder that allowed the use of most Leica lenses without the need for auxiliary viewfinders.  Obviously, this camera did not come about overnight.  It was the culmination of a long development process.  One of the earliest moves in this direction was the Leica IV.  While still relying on the standard Leica screw mount, the camera did have a built-in viewfinder/rangefinder with interchangeable segments that allowed switching between different focal lengths. 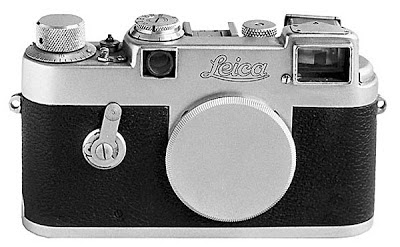 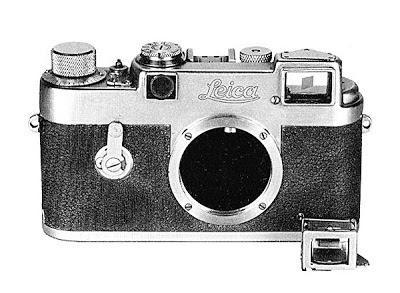 These are only a few experimental cameras that we know of, a lot more has and is going on at Leitz/Leica that we don’t know about.  But it is a fascinating insight into the history Leica.  I am now looking forward to visiting Solms during my trip to Germany in a few months.  Maybe I luck out and find an interesting piece of Leica lore that I don’t know about yet.  Either way, I will report on it on these pages.  Stay tuned.