It is often said that the Leica was the first 35mm camera.  However, that does require some qualification.  If we look at cameras from the prototype stage, the Leica was there almost from the very beginning.  While a fair amount is known about the Leica, any similar information is almost impossible to obtain about most other cameras.   Therefore it is a lot more accurate to look at cameras from the date they were actually introduced to the photographic market.  In this regard there are several cameras that preceded the Leica.

Here the main credit goes to the Lumiere brothers in France and Thomas a. Edison in the US.  Both used perforated film material to assure proper handling of the film within the camera and projector.  However, while Edison used a small, enclosed viewing device, accessible to only a couple of people at a time, the Lumiere’s were the first to project film onto a large screen in a theater.

The 35mm film as we know it today came about upon the initiative of Edison and George Eastman of Kodak.  They both realized that the multitude of different film formats and perforation arrangements needed to be standardized.  They decided on the 35mm film format with perforation on both sides of the film and a motion picture image of 18mm x 24mm.

This shows the great farsighted ness of Oskar Barnack, the inventor of the Leica.  Even his prototype camera, the so called Ur-Leica did away with any of these conventions.  Rather than running the film vertically, like in all motion picture cameras, he decided to run the film horizontally.  This allowed for a twice as large 24mm x 36mm image size which was to become the standard of the industry.  In spite of the large image size, the camera was substantially smaller, which is another reason for the later success of the Leica. 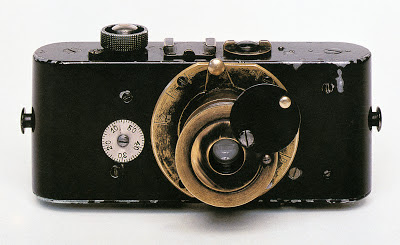 One of the earliest examples of a 35mm camera was the Tourist Multiple from 1913.  It was made by the Herbert & Huesgen, New Ideas Mfg. Co. in the US and was the first commercially produced 35mm camera ever.  The camera used a 50 foot magazine for the film which allowed 750 half frame 18mm x 24mm exposures to be made. 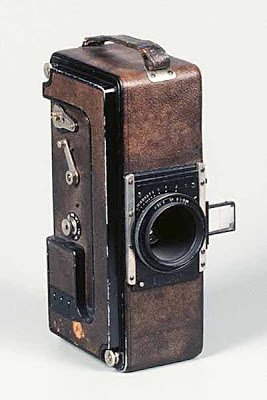 The Tourist Multipel was soon followed by the Simplex in 1914, made by Multi Speed of New York.  This camera too used the half frame format and utilized enough film for 800 exposures. 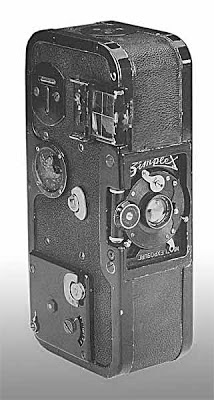 Needless to say, because of the great length of film, these cameras were rather large and heavy.  It wasn’t until 1915, when Levy Roth introduced the  Minigraph in Austria, that film length became a lot more manageable.  The Minigraph used film for 50 exposures in special cassettes.  But this camera too followed the motion picture cameras with its half frame format. 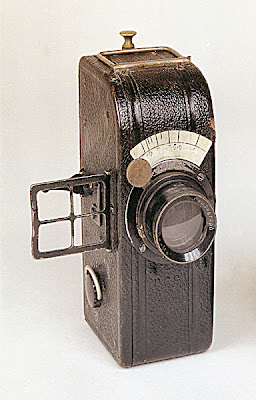 Another camera with a 50 half frame capacity was the Le Phototank from 1922.  It was made by Victor Houssin in France.  Another camera from 1922 was the Sico, madeby Simons & Co in Switzerland.  The Sico took a different path by utilizing unperforated 35mm film.  This allowed for a much larger 30mm x 40mm negative size with a capacity of 25 exposures. 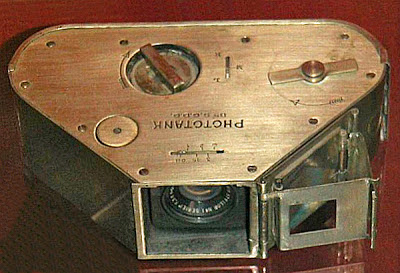 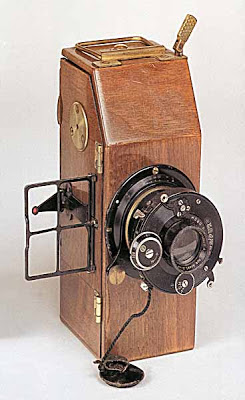 These cameras were followed in 1923 by the Sept.  It was made in France by Debrie.  The camera was equipped with a spring driven motor which essentially made it a motion picture camera with a still frame feature.  Even though the camera itself was relatively compact, it was very heavy and not very comfortable to use. 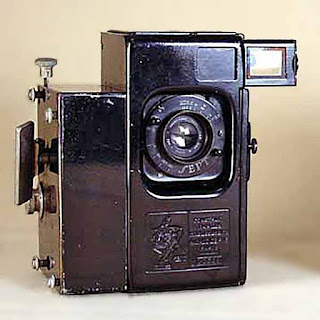 Thus it was not surprising that the Leica created quite a sensation when it was introduced at the Leipzig Spring Fair in 1925.  The camera was substantially smaller and lighter than anything seen before.  In addition the camera used the 24mm x 36mm full frame format which assured noticeably better results.  This was further enhanced by the outstanding performance of the 50mm f/3.5 Anastigmat lens. 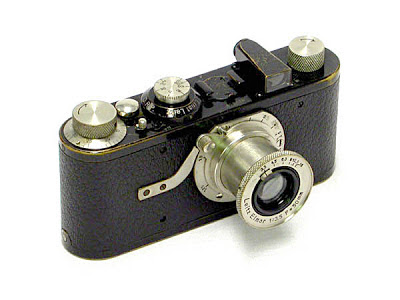 The camera quickly gained acceptance by a wide range of photographers from professionals to amateurs.  Finally there was a camera that was easy to use and, because of its diminutive size, easy to carry.  It was this camera that put 35mm photography on the map, so to speak.  As a matter of fact, the Leica influenced photography to a much greater extent than any other camera before or after.  Photography as we know it today simply would not have happened without this camera.