NON-DIGITAL PIXELS or HOW WAS THIS DONE?

When I studied photography in college a few years ago, one of the assignments was called “Formal Portrait.”  Everyone approached the assignment very conservatively, setting up typical, formal portraits with low ratio lighting, neutral backgrounds etc.  Even a somewhat stronger Rembrandt lighting was considered a bit daring.  With other words, formal was being equated with conservative.

I have never been a conservative individual, and I wasn’t about to change course simply because of the title of the assignment.  I began to think of what I could do to take a formal portrait and yet have it displayed in a non-conventional manner.

The result was a photograph taken by entirely conventional means, on film.  No digital photography or Photoshop was involved. 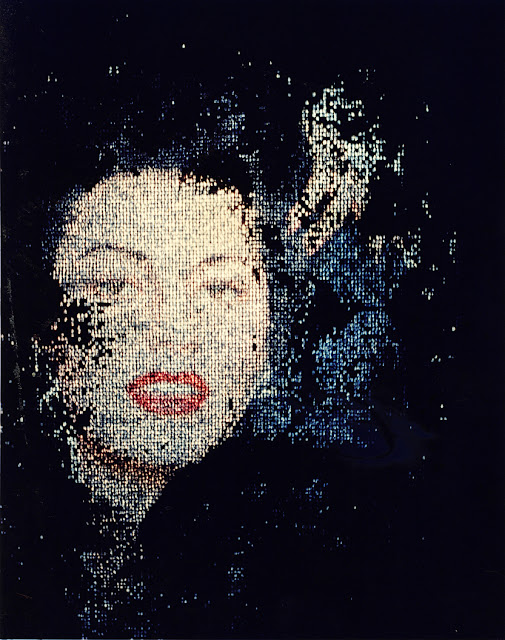 Whenever people see the picture, their first thought is digital and Photoshop, and even then I am always asked how the shot was taken.  I guess it is somewhat hard to imagine and I am curious how readers of this blog would have approached it.

The original was taken on film and I later scanned the end result.

Besides digital manipulation, people have had many guesses how this was done, many guessing on the use of a screen.  But it was more involved than ...

''It looks like it might have been taken through a very coarse printing screen for offset printing.'
Or
'With close inspection, this definitely looks like the picture was taken through a screen. But that would require depth of field beyond what any lens is capable of. That also doesn't explain the black pixels. I am baffled.'

I made an enlargement of the negative and then prepared a simple piece of window screen as an overlay of the print.  This was further modified by using thick, black paint to black out the outer perimeter of the screen.  By just lightly touching the screen with the brush I was able to create the "pixels" on the face as well as some of the other, lighter parts of the picture.  After the paint had dried, I copied the photograph with the overlaid screen to obtain the above end result.