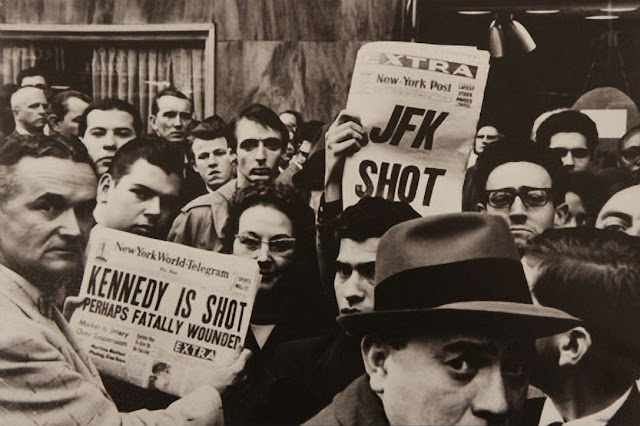 Picture made by Lisl Steiner in Times Square (New York) on November 22, 1963, a few hours after being known that JFK had been slain in Dallas (Texas), which prompted the launching of a number of special editions by the most significant newspapers and illustrated magazines of the time.
© Lisl Steiner 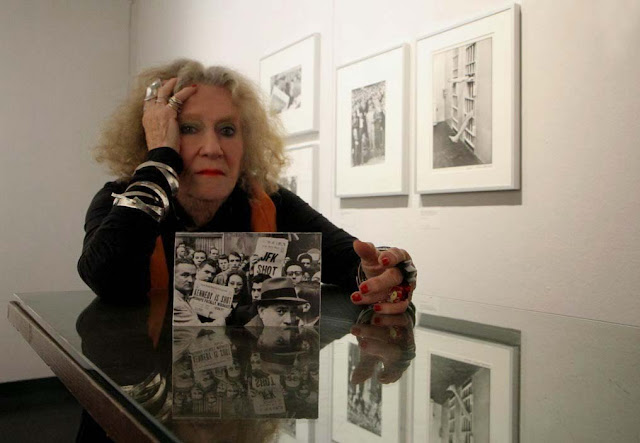 50 years later, Lisl Steiner inside WestLicht Vienna beside a copy on black and white photographic paper of the picture she made in Times Square (New York) on November 22, 1963, a few hours after John Fitzgerald Kennedy´s death was announced.
© jmse

The assassination, which happened in Dallas (Texas) on November 22, 1963, shocked the world and had an exceedingly comprehensive coverage within the whole both American and international press.

After the assassination of John Fitzgerald Kennedy, 35th President of the United States, in Dallas (Texas) on November 22, 1963, his state funeral and burial were held between 23 and 25 of that month and year inside the Rotunda of Capitol in Washington and the Arlington Cemetery in Virginia.

Throughout the following three days after the assassination, the State Funeral developed.

Firstly, the casket with JFK´s body was taken by the Air Force One aircraft from Dallas to Washington D.C, his autopsy being made at the Bethesda Naval Hospital, being subsequently transferred to the White House East Room on Saturday November 23, 1963 at 4:30 a.m, where the bier rested on a catafalque lying in state for 24 hours. The former United States presidents Harry S. Truman and Dwight H. Eisenhower along with Herbert Hoover Jr (representing his father the former president Herbert Hoover, who was ill) arrived to express their condolences to Jacqueline Kennedy, Attorney General Robert Kennedy, Senator Edward Kennedy and the rest of JFK´s relatives. 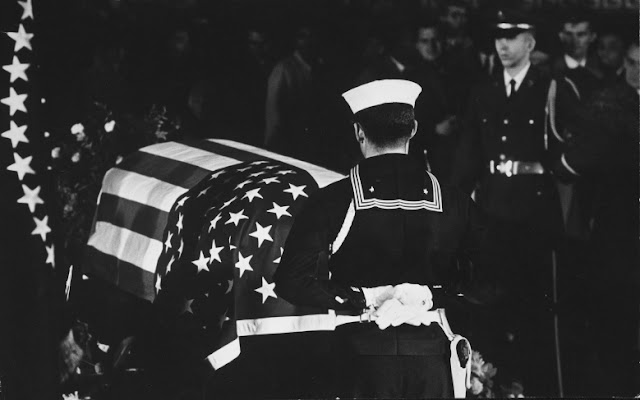 In the middle of a dead silence and high security measures, The Austro-American photojournalist working for Keystone Press Agency managed to photograph the coffin with the body of John Fitzgerald Kennedy inside the Rotunda of Capitol in Washington D.C, shooting handheld at f/4 with its Leica M2 rangefinder camera and Summicron-M 35 mm f/2 first version SAWOM at a very slow shutter speed. Needless to say that the lack of swiveling mirror and the whispering noise of the shutter release button were fundamental to keep utter discretion during the photographic act and to get amazing sharpness visible in both the U.S marine and the American flag under exceedingly dim light conditions.
© Lisl Steiner

The next day Sunday November 24, 1963, the bier with John Fitzgerald Kennedy´s remains and covered with the United States flag was borne on a caisson drawn by horses up to the Rotunda of Capitol for its lying in state and wake, and during the whole day, hundreds of thousands of persons made very long queues to give their last farewell to the slain president, whose coffin was custodied by an honor guard.

A sepulchral silence ruled the vigil (only interrupted by the eulogies delivered by Senate Majority Leader Mike Mansfield of Montana, Chief Justice Earl Warren and Speaker McCormack), with JFK´s coffin inside the Rotunda of Capitol, overcrowded with personalities of United States in different scopes, relatives and friends of Kennedy family and a number of dignitaries from all over the world who were arriving during the day. 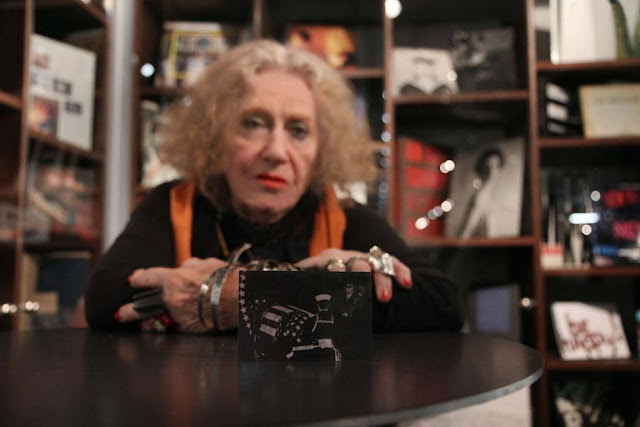 50 years later. Lisl Steiner at Westlicht Vienna next to a copy on black and white photographic paper of one of the pictures she made with Leica M2 and Leitz Canada Summicron-M 35 mm f/2 Version 1 SAWOM 11308 inside the Rotunda of Capitol of Washington during the lying in state and wake of the coffin with John Fitzgerald Kennedy´s human remains. In spite of the rather dim light conditions prevailing at the moment, she was able to shoot handheld at f/4 and a very low shutter speed of 1/8 sec thanks to the very compact size and weight of the Leica M2 and the tiny wideangle lens, along with the lack of a slapping mirror inherent to rangefinder cameras and the high for the time ISO 200 sensitivity of the 24 x 36 mm format Kodak Super-XX Safety Panchromatic black and white film used. This way, the photographer could get enough depth of field to render both the United States flag on the whole JFK´s coffin and the two members of the honor guard in focus.
© jmse

Lisl Steiner, who was covering the State Funeral as a photographer for Keystone Press Agency, spent all the night inside the Rotunda of Capitol by her great friend Cornell Capa (sent by Life) and could live the huge emotional intensity pervading the event (presided by Kennedy family, the just sworn in new president Lyndon Johnson, the members of the Congress and a lot of civil servants of the American administration), getting some pictures both of John Fitzgerald Kennedy´s bier and the atmosphere reigning within the symbolic building oozing a remarkable architectural design, which also held among others the funerary services for Abraham Lincoln. 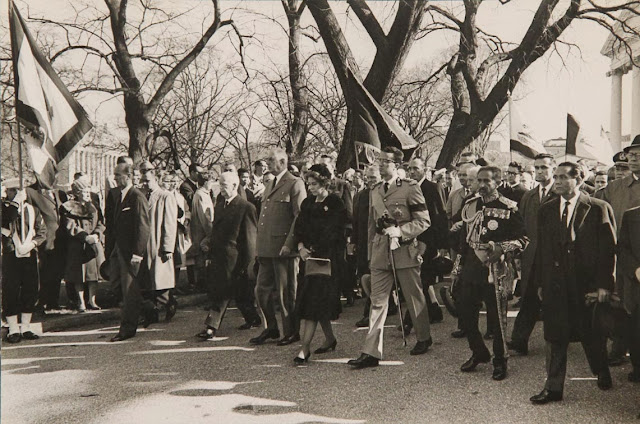 After a frantic effort, Lisl Steiner manages to advance through the crowd and the security cordon and photographs with her Leica M2 and her Leitz Canada Summicron-M 35 mm f/2 First Version SAWOM 11308 well-known dignitaries from all over the world who have come to pay their last respects to John Fitzgerald Kennedy, and walk towards St. Matthew´s Cathedral. From left to right can be seen: Heinrich Luebcke (President of West Germany), Charles de Gaulle (President of France), King Baodouin of Belgium, Queen Frederika of Greece, Emperor Haile Selassie of Ethiopia and Diosdado Macapagal (President of Philippines).
© Lisl Steiner

up to St. Matthew´s Cathedral, where a Requiem Mass was held.

Then, when the Mass finished, the casket with JFK´s body abandoned the cathedral and the funeral procession began with everybody walking the streets of Washington D.C towards the Arlington National Cemetery, where John Fitzgerald Kennedy was buried in the midst of grief outpouring shared by all the attendees, among whom there were 220 dignitaries coming from 92 countries. 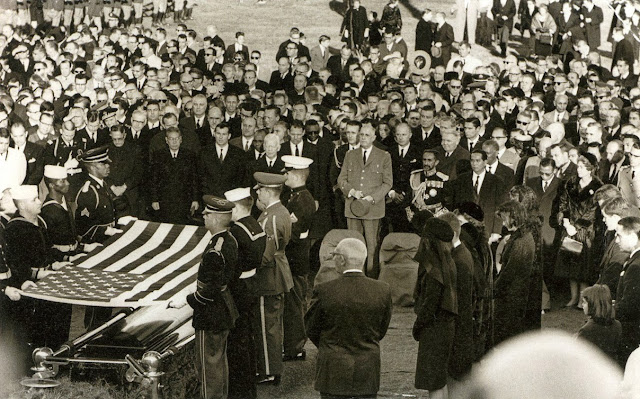 Photograph made by Lisl Steiner in which she captures the ceremony of folding flag over John Fitzgerald Kennedy´s casket previous to its interment at Arlington National Cemetery on November 25, 1963. Charles de Gaulle (President of France) and Haile Selassie (Emperor of Ethiopia) are clearly visible in the middle of the image. Ludwig Erhard (Chancellor of West Germany) is behind Haile Selassie, while on his right appear Diosdado Macapagal  (President of Philippines) and Chung Hee Park (President of South Korea).
© Lisl Steiner

Just beyond the United States flag are Hayato Ikeda (Prime Minister of Japan) and Herbert Charles Hoover Jr, son of the 31st President of the United States Herbert Clark Hoover(who couldn´t attend the funeral because of illness).

King Baudoin I of Belgium is in the middle far right of the photograph, and in front of him him are the Queen Frederika of Greece and Senator Edward Kennedy.

Jacqueline Kennedy is the woman with mourning black attire and veil nearest to the camera, and the man by her on the right is Attorney General Robert Kennedy.

220 dignitaries from 92 countries were present at the state funeral. 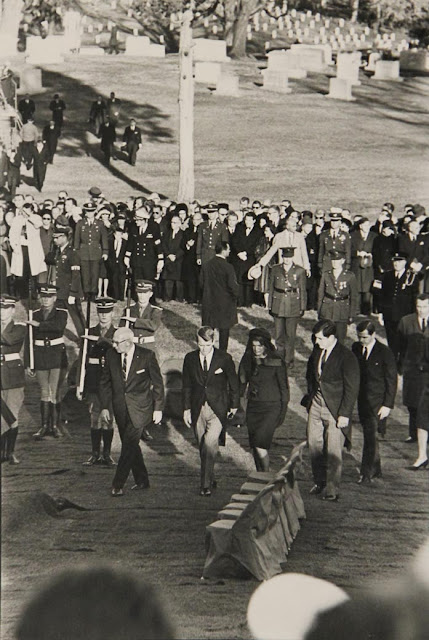 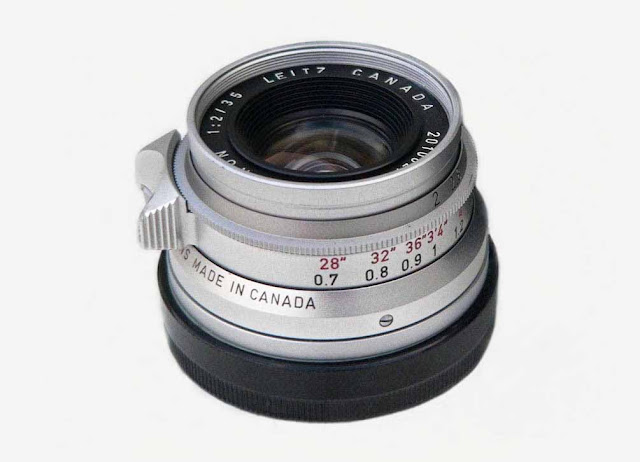 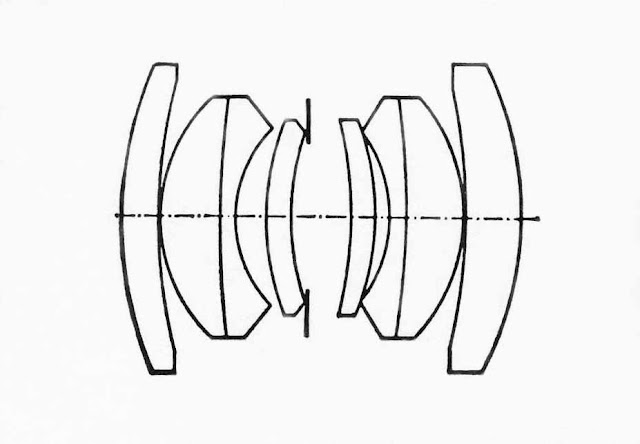 designed by Walter Mandler at Leitz Canada factory in Midland (Ontario), following the classical Double-Gauss scheme but adding two further elements, with a weight of only 150 g and highly miniaturized dimensions, which provided great comfort of use along with a good quality at maximum aperture and superb quality stopping down from f/4, as happens in this picture in which Lisl Steiner shoots at f/8 taking advantage of the plentiful natural light available. Presented at the Photokina Köln 1958, its optical formula including a lot of rare earth glasses and exotic coatings was optimized by Mandler to achieve best results at f/4 and f/5.6, being likewise a cult lens, because of its famous and unique subtle gradation of the out of focus areas, its gorgeous cosmetic beauty 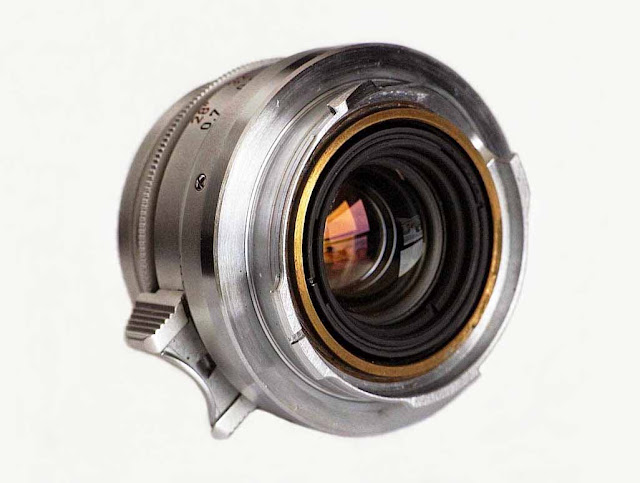 and an exceptional mechanic construction greatly made by Hans Karl Wiese, an outstanding Leitz Canada fifties and sixties specialist on the mounting of optical elements during the assembling stage of the objectives and Horst Haseneier, a true optical genius sporting a painstaking artisan profile and a consummate expert in the grinding and polishing of those optical elements. In addition, already in 1957, Rudolf Seck, Head of the Applications Laboratory at Leitz (Wetzlar), had made abundant tests with several prototypes of this lens sent from Leitz Midland (Canada) to evaluate its performance in real use by professional photographers (something that Leica has always prioritized over the MTF graphs of its lenses on assessing their true optical and mechanical virtues), realizing its amazing image quality, very special fingerprint, versatility and duration keeping identical behavior during a lot of decades of intensive use. 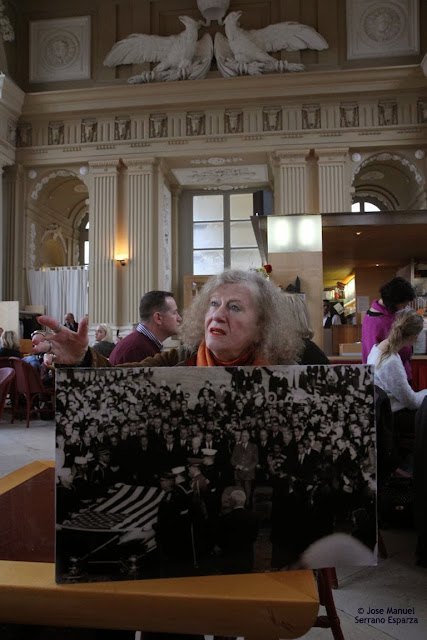 50 years later. Lisl Steiner inside the Café of Schönbrunn Palace Gloriette in Vienna, with a 30 x 40 cm print on black and white photographic paper of the picture made at Arlington National Cemetery during the ceremony of folding flag some seconds before the interment of John Fitzgerald Kennedy on November 25, 1963.
© jmse 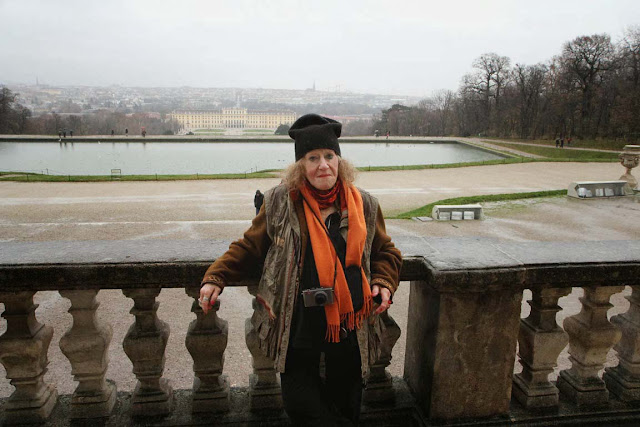 Lisl Steiner on November 24, 2013, the day of the 50th Anniversary of John Fitzgerald Kennedy´s Funeral, in the balcony of the Gloriette of Vienna Schönbrunn Palace, visible in the background. The photographer remembers very well every detail both regarding the whole night she spent inside the Capitol Rotunda of Washington D.C on November 24th 1963 and the scenes of collective distress she witnessed during the interment of the 35th President of the United States on November 25th, 1963 in Arlington Cemetery.
© jmse

Posted by LEICA Barnack Berek Blog at 11:50 AM