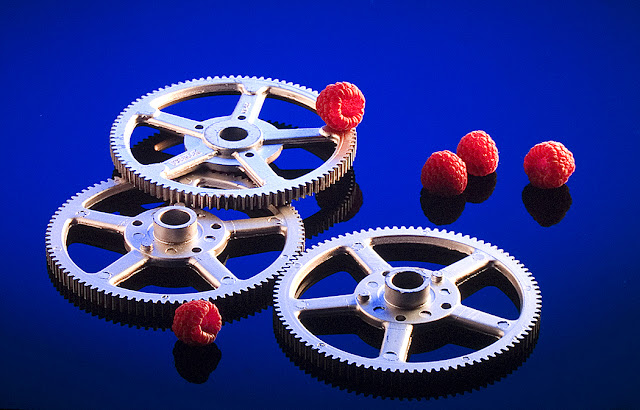 By Heinz Richter
I have often been asked how this photograph was done  The execution was not complicated or particularly difficult, but it definitely required an in- depth knowledge of lighting and exposure control.  No automatic features of a camera, regardless of how sophisticated, would be of any help here.
I have always been fascinated with the types photography where the photographer has to do everything, create the set and execute the proper lighting before any photographs could even be taken.  Then of course, there is the correct exposure control and finally, when all is done correctly, the final result, the photograph.

I had the idea of this shot for quite a while; it was just a matter of taking the time to set it up.  But how to get to the point of triggering the shutter to take the photograph?
I wanted the items in the photograph to sit on a reflective surface with a blue background.  But I also wanted a light fall off of the blue toward the bottom of the photograph and the corners.
I started with a polished piece of black Plexiglas.  The gears and the raspberries were relatively easy to arrange.
Direct lighting for the blue background is impossible in this situation because it would show a reflected image of the actual light source.  Instead I used a dark grey, flat material and lit it with a blue gel attached to the light.  The trick was to arrange the grey material and its illumination in a manner that the reflection off the Plexiglas was visible in the viewfinder of the camera.  Once that was achieved, the shape of the blue illumination was varied to show fall off to the corners and the bottom.  A soft spot light makes that quite easy by varying the distance of the spot light from the dark grey surface. 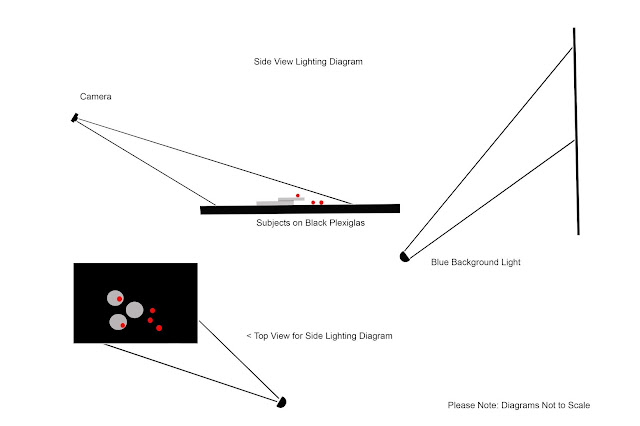 The camera’s lightmeter would only work of it had a spot reading function.  In cases like this I prefer to use a hand held lightmeter with a spot attachment.  For the basic exposure setting I used an underexposure of 1 ½ stops to achieve the intense blue color.
Even though the Plexiglass was black, its shiny surface reflected substantially more light than the subjects in the photograph and no nominal blue light exposure would show with the exception of some areas of the gears.
Would a white surface for the blue light have worked?  Possibly, but it has been my experience that a darker surface, even a black material, makes it a lot easier to show the desired light fall off and the colors are more intense.
Next it was necessary to light the gears and the raspberries.  This was done with a small soft box (an umbrella light would work just as well), also positioned behind the set, but off to the right to avoid any reflection of the light to be visible on the Plexiglas.
Since the exposure settings of the camera were determined by the blue light, it was now necessary to match the intensity of the light from the soft box to that of the blue light.  Again a handheld lightmeter with a spot attachment was used.  Taking a spot reading of the three raspberries in the background allowed to set the light intensity such that the light shining through the raspberries would be one stop underexposed to render the intense read colors. 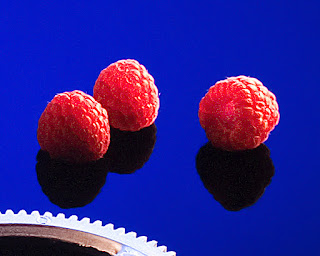 The light from the softbox had the additional advantage of partially reflecting off the metal gears, rendering a warm reflection besides some of the blue light from the background. 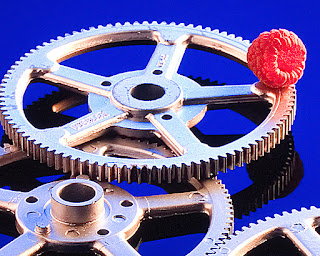 Normal daylight film or daylight setting for the white light balance works well as long as an incandescent light source is used for the subject lighting.  That will result in the intense blue along with a warm rendering of the subject exposure.
Could a white surface have been used instead of the Plexiglas?  Of course, but the effect of the lights and the overall look of the photograph would have been quite different.  Especially the reflection of the metal gears and the raspberries off the Plexiglas would not have been visible.
Since both light sources were behind the subject matter, the reflections have the advantage of being almost black, thus not distracting from the subject matter itself, but still adding an extra element to the overall photograph. 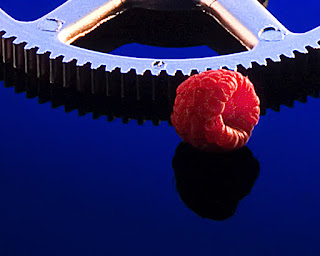 Only a small section of the gear to the right shows some of the warm side light being reflected.  In addition there is the extra dimension of  the cold blue as well as the warm reflections of the two light sources. 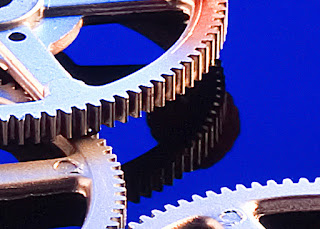 Any project like this is not for anyone in a hurry.  It takes a fair amount of time to set up, the subjects as well as the lighting.  But the end results can be very rewarding.

Posted by LEICA Barnack Berek Blog at 9:50 AM