The Leica museum in Solms has Oskar Barnack’s original prototype, the Ur-Leica on display, although it is only a replica.  The original resides in a bank vault.  This, however, is not the camera that Oskar Barnack built and used for himself.  It is an identical version which he gave to Ernst Leitz  in 1913, and it is the camera that Ernst Leitz took on a trip to the US in 1914.

The subject has been well researched by Leica historian Gianni Rogliatti, who gave the following account:

I recently discovered a picture that quite obviously showed the original prototype, the Ur-Leica.  But it was noticeably different from the one generally known and shown in pictures.  I wrote about it on this blog under the heading: “IS THIS THE OTHER UR-LEICA?”

Unfortunately the picture was a relatively poor reproduction.  But it did show some clear differences in its appearance when compared to the known Ur-Leica and I wondered if it might be Barnack’s original camera.

I have researched the subject further and have obtained an original enlargement of that very picture.  On the back it says, “Erste Konstruktion der Leica-Kleinbildkamera von Oskar Barnack”  (First construction of the Leica small negative camera of Oskar Barnack).  It further says:  Deutsches Museum, Postfach, 8000 München 20 (German Museum, PO Box, Munich 20).

Apparently the photograph was taken while the camera was in the possession of the Deutsches Museum.  That is further supported by the fact that the picture I originally published was from a 1952 publication, indicating that the original had to be taken prior to that.

Considering these facts, the most plausible conclusion is that this is indeed a picture of Oskar Barnacks personal camera, the second Ur-Leica. 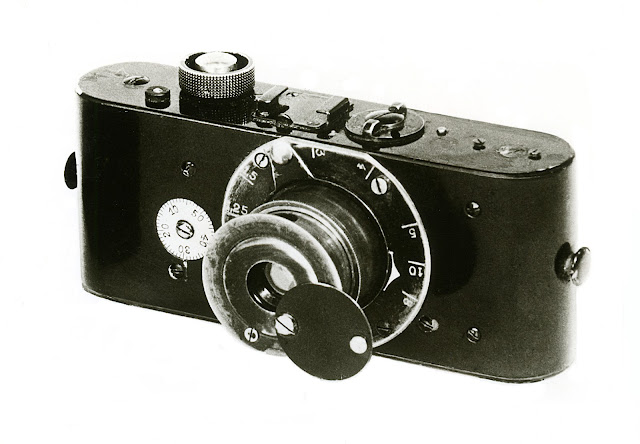 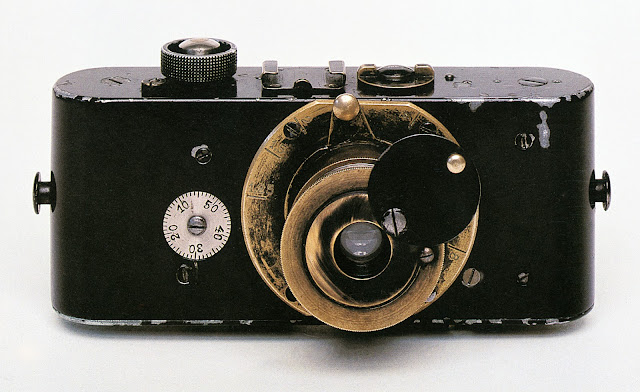 The differences between the two cameras are clearly visible.  The chipped off paint on the Leica Museum version are obvious.  But there is more, the large screw on the right side of the top plate, next to the film winding know  has a rounded top on the Deutsches Museum version while the Leica Museum one is flat.  Similar, the left side of the top plate shows two srews which are clearly raised on the Deutsches Museum camera while the same screws are flush with the top of the camera on the Leica Museum one.  Also, the five screws on the front of the cameras clearly show to be in different positions between the two cameras.

All of this clearly indicates that we are looking at two different cameras of basically the same design and construction.  While we know about the Leica Museum version, we know very little about the other one, especially what happened to it after the death of Oskar Barnack’s son.  Maybe time will tell.

For more about the Ur-Leica, go to:

Posted by LEICA Barnack Berek Blog at 11:16 AM