PHOTOGRAPHIC LIGHTING THEN AND NOW

In the early days of photography, the only source of light was, of course, the sun. Subsequently photography depended mostly upon long days and good weather. It was obvious that artificial light would be indispensable: not dependent on the sun anymore, pictures could be taken where natural light wasn’t sufficient, or on dull days when studio work was impossible.

The first artificial light photography dates back to 1839, when L. Ibbetson used oxy-hydrogen light (also known as limelight, discovered by Goldsworthy Gurney) when photographing microscopic objects. Limelight was produced by heating a ball of calcium carbonate in an oxygen flame until it became incandescent.

Despite being used widely around 1839-1840, the results of using the chemical were rather poor: chalk-white pale faces and a harshly lit picture, an effect created due to the imperfection of the light source and differentiation of the reflectance of different parts of the scene (due to different distances and materials).

Attempts of using limelight and other chemical sources for lighting the picture can be considered to have been a failure, either because they did not contain the rich blue, that the plates of the day required, as well as due to the chemical’s low intensity.

Other possibilities had to be explored. Nadar – an early French photographer and journalist – for example, photographed the sewers in Paris, using battery-operated lighting. Later the arc-lamps were introduced to aid photographers, but it was not until 1877 that the first studio using electric light was opened.

Powered by a gas-driven dynamo the studio by Van der Weyde in Regent Street, had the light sufficient to allow exposures of 2 to 3 seconds.

Despite being quite a step forward in artificial lighting development, the early chemicals could not provide the satisfying result for the photos. Producing a shorter, and therefore more predictable flash became the goal. There was one solution: magnesium.

In 1862 Edward Sonstadt began experiments to prepare the metal on a commercial basis and by 1864 magnesium wire was finally placed on sale. 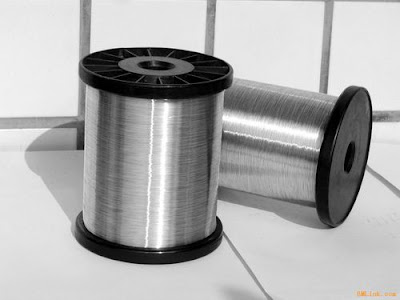 The wire was extremely expensive, but following an extremely successful demonstration in February the same year, where a photograph was produced in a darkened room in only 50 seconds, the highly actinic light proved ideal for photography and became incredibly popular.

The technology of the wire wasn’t too complicated. Magnesium was burned as a wire or ribbon twisted into tapers or clockwork lamps with a reflector. There were different lamp designs, each for different use. Despite different ways of using the magnesium, there were no ideal variant for this method. 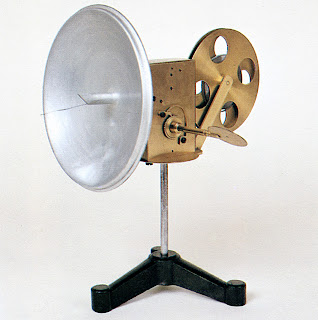 Burning was often incomplete and unpredictable. Exposures varied considerably and the air remained laden with grey, opaque fumes, making the method unsuitable for studio use.

Even more, the technique was not without its obvious dangers and it also released a lot of smoke, smell and a fall-out of white ash.

Nevertheless, magnesium lamps gained in popularity through the 1870s and 1880s despite the expenses and danger. Trying to solve the unpredictability of the popular magnesium technique, Charles Piazzi Smyth, experimenting in the pyramids at Giza, Egypt, in 1865, had attempted to ignite magnesium mixed with gunpowder. The resulting picture was quite poor but the principle of combining magnesium with oxygen-rich chemical resulting in a combustion was developed.

In 1887, Adolf Miethe and Johannes Gaedicke mixed fine magnesium powder with potassium chlorate to produce Blitzlicht. This was the first ever widely used flash powder. Blitzlicht gave the photographers the ability to produce instant photographs at night at a very high shutter speed. This caused quite an excitement in the photography world. 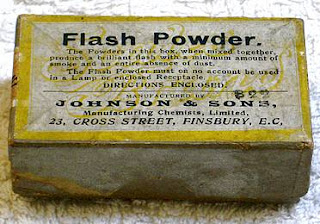 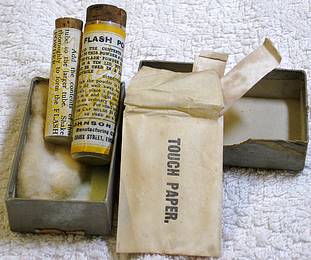 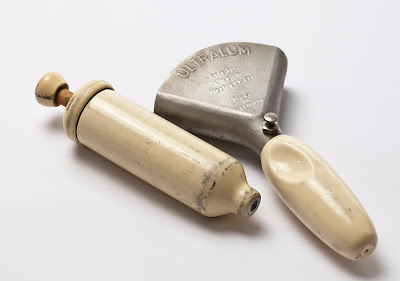 Flash powder "flash gun" with flash powder dispenser
Pushing the spring loaded button on top of the dispenser would release a premeasured amount of flash powder. 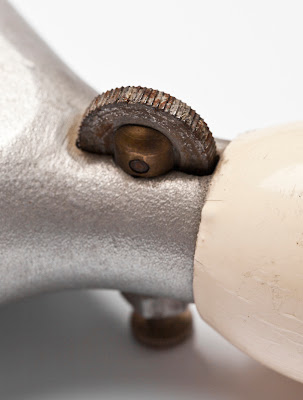 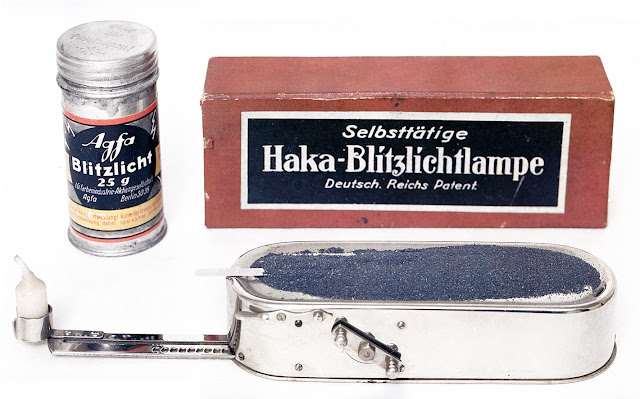 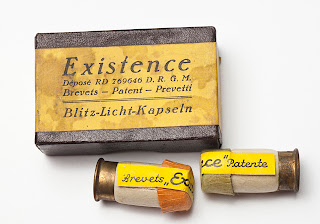 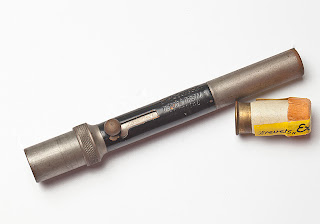 Flash gun for preloaded capsules
A spring-loaded firing pin would set off the flash via the percussion caps.

In his experiments in underwater photography in the 1890s, Louis Boutan – a French zoologist and a pioneer underwater photographer – used a cumbersome magnesium lamp. Powdered magnesium, sealed in a glass jar fixed to a lead-weighted barrel to supply oxygen during burning, was ignited by means of an alcohol lamp.

Paul Vierkötter used the same principle in 1925, when he ignited magnesium electronically in a glass globe. In 1929 the Vacublitz, the first true flashbulb made from aluminum foil sealed in oxygen, was produced in Germany by the Hauser Company using Johannes B. Ostermeier’s patents. 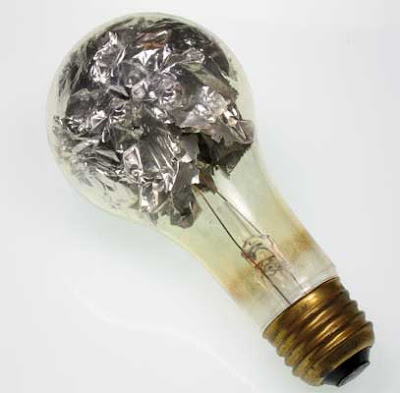 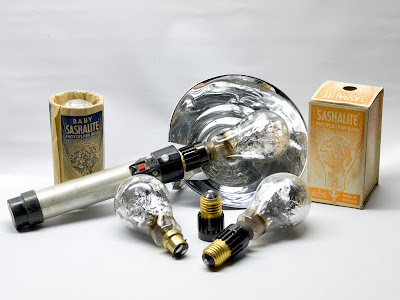 It was quickly followed by the Sashalite from the General Electric Company in the USA.

The flash bulb was an oxygen-filled bulb in which aluminum foil was burned, with ignition being accomplished by a battery. The light of the bulb, although powerful, was soft and diffused, therefore less dangerous to the eyes than flash powder.

Using a flash bulb produced neither noise nor smoke when the charge was fired. This provided an opportunity to using flash in places where flash powder use was questionable or simply dangerous. The first photos using the “Sashalite” flashbulb were published by The ‘Morning Post.

The pictures were of the engine-room and other compartments of a submarine. These were not only interesting as unusual subjects, but they indicated a high technical standard. It was not to be until 1927, however, that the simple flash-bulb was to appear for sale.

Flashbulbs were a big step forward. They weighed little, were easily fired electrically and were extremely powerful and, therefore, convenient. Another important aspect of the technique was that it was extremely safe, especially compared to the widely used before flash powder.

Due to a high quality of the invention, mass-market cameras were soon fitted with flashguns or synchronizers to fire a bulb when the shutter opened. This was a huge technological leap forward for the photography and a very advanced technology in its own, so by the 1950s bulbs had virtually replaced flash powder on the market. 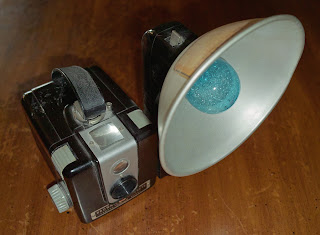 There were also several versions of the flashbulbs released to the consumer that fitted everyone from professional to amateur photographers. The purpose was mainly to make the use of the flash more convenient for a novice or an amateur user.

For example, Flashcube, a popular bulb by Kodak was a device that had 4 bulbs installed in one, making it easier to take several pictures in smaller amount of time. 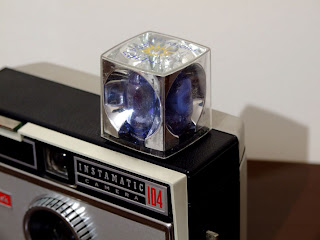 Early flash photography was not synchronized. It’s hard to imagine an non-synchronized flash today, but the way those worked was that one had to put a camera on a tripod, open the shutter, trigger the flash, and close the shutter again – a technique known as open flash. The exposure time had to be managed manually, and the process was very inconvenient compared to today.

Despite all of the problems, the open flash technique using flash powder was being used quite widely until the 1950s. But with the success and ease with which flash bulbs were used, flash powder slowly became history. With the marketing success of flashes, and the value of the idea of taking pictures at any time of the night or day, by the late 1930s manufacturers began to incorporate flash synchronization into their cameras. 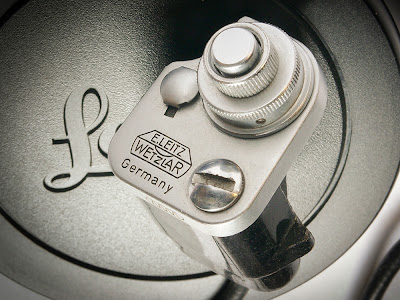 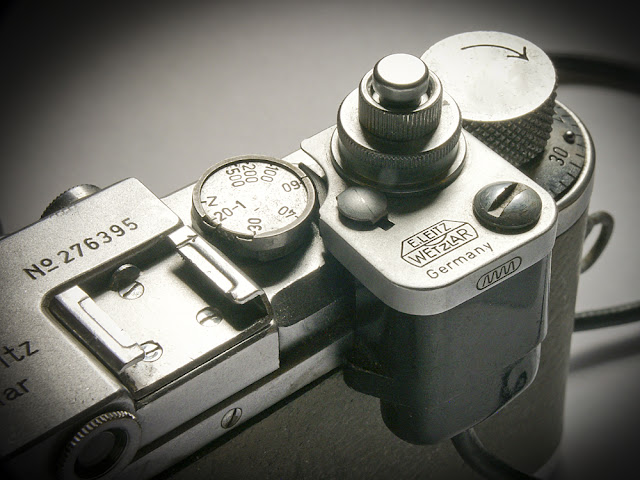 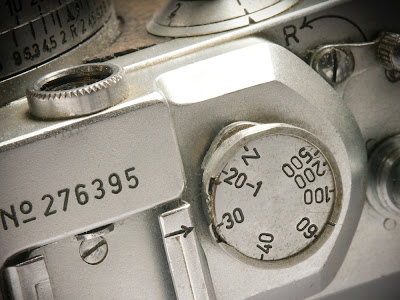 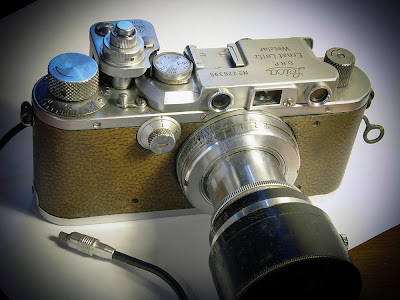 Some of the first mass produced cameras with this facility were the Kine Exakta, Falcon Press Flash, Agfa Shur-Flash and the Kodak Six-20 Flash Brownie box camera released in 1939 and 1940. After World War II, it became usual for a camera to have a flash synced shutters.

Cameras designed to be used with flash bulbs usually had different sync modes in order to be used with various bulb types. Depending on the requirements, the flash contacts were triggered accordingly prior to the shutter being open.

The principles of flash bulb synced cameras are still used today in modern cameras with electronic flashes and with big studio lights.

It was in 1931 when Harold Edgerton – a professor of electrical engineering – produced the first electronic flash tube. One of the most important advantages compared to the flash bulbs was that the electronic flash intensity could be controlled and adjusted.

Another great advantage, of course, was the rechargeable aspect of the electronic flash. Flash bulbs, despite being extremely useful, were very expensive and could only be obtained by professional photographers. Electronic flash used batteries of some sort, so it was possible to recharge the system.

Today’s flash units are electronic flash tubes. An electronic flash contains a tube filled with xenon gas, where electricity of high voltage is discharged to generate an electrical arc that creates a short flash of light.

Modern electronic flash for on-camera use 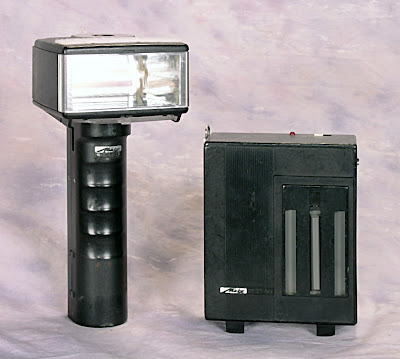 Metz 60 series flash, one of the most powerful portable flash units available

Multiblitz, a modern studio flash with built in modeling light

Photographic flash has moved through chemical to electronic phase, mostly driven by a desire to shorten duration and increase intensity of the light. In addition, a sensor either in the flashgun or within the camera is now used to detect that enough light has reached the film (‘auto’ flash).

For that, an infrared sensor is usually used to determine the distance between the camera and the subject, therefore setting the aperture and flash intensity automatically.

With every automated process there is always a possibility of something going wrong. The disadvantages with automatic electronic flash lie with unequal lighting in subjects at dissimilar distances from the camera with the flash, however, this problem is easily solved by using several light sources when working with the subject.

The red-eye effect happens because the light of the flash occurs too fast for the pupil to close and much of the very bright light from the flash passes into the eye through the pupil. The light then reflects off the back of the eyeball and out through the pupil.

The camera records this light. Since the light goes through the blood in the choroid which nourishes the back of the eye, the color of the eye is red, hence this annoying effect everyone is aware of. Various techniques are available to combat the problem today, but it’s interesting to know why it occurs!

Posted by LEICA Barnack Berek Blog at 9:31 AM