An interesting, but relatively unknown fact is that NASA initially had chosen the Leica MDa as the camera to be used on their lunar missions.  The reason was weight.  Of all the systems for the Apollo missions, one could never be tested because of the low gravity of the moon.  That was the take-off module.  To gain as much of a weight advantage as possible, NASA did everything they could to save weight.  That included the camera equipment.  The Leica MDa with 35mm f/1.4 Summilux was definitely lighter than anything Hasselblad, their regular camera of choice, had to offer.  Leitz modified several cameras and lenses to feature large levers to allow camera operation with the bulky gloves of the space suits.  The astronauts chosen for the lunar missions all received extensive training in the use of the camera. 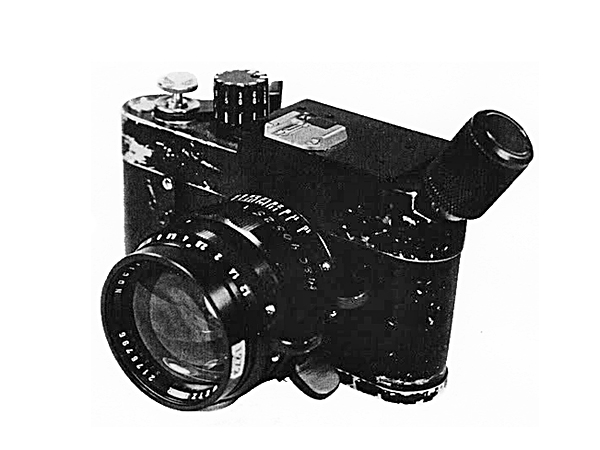 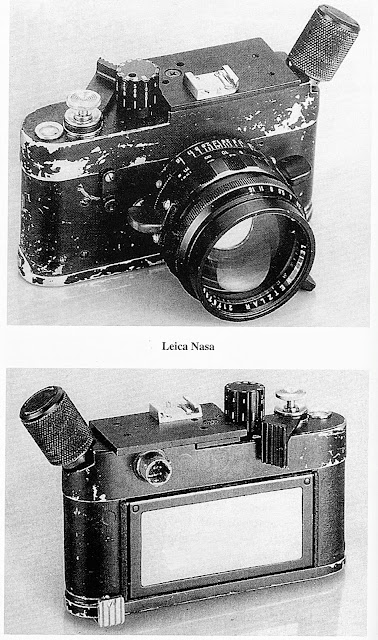 NASA Leica MDa.  Modifications appear to be a soft shutter release, a larger shutter speed dial, an enlarged film wind lever a large rewind knob and an enlarged lever to open the camera.  The top of the camera also has a beefed up plate with an accessory show attached.  There is also an electronic connection of an unknown purpose in place of the PC connection.
Modifications of the lens are large levers for the aperture and focus settings, all designed for easy operation with the gloves of the space suits.

Yet, as is common knowledge, the Leica never made it to the moon.  The credit goes to one engineer who figured out that the interchangeable film backs for the Hasselblad were lighter than the Leica MDa with its Summilux lens.  Subsequently NASA decided to use the Hasselblad after all.  The Saturn 5 rockets had no problem delivering the payload to the moon.  For the return trip it was subsequently decided to remove the film backs from the cameras and to leave the cameras and lenses on the moon where they still reside today.  A total of 12 Hasselblad cameras and lenses are sitting in the lunar dust, ready to be picked up. 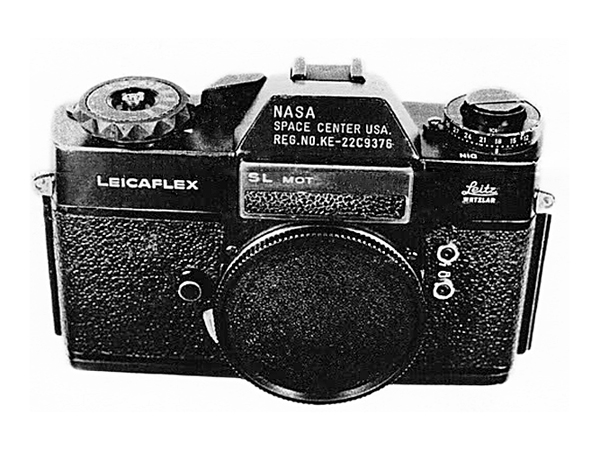 Already in the earliest stages of the NASA space program, Leica cameras were part of the equation.  One such camera was the Leica Ig.  With this camera astronaut John H. Glenn, Jr., took the first human-shot, color still photographs of the Earth during his three-orbit mission on February 20, 1962. Glenn's pictures paved the way for future Earth photography experiments on American human spaceflight missions. 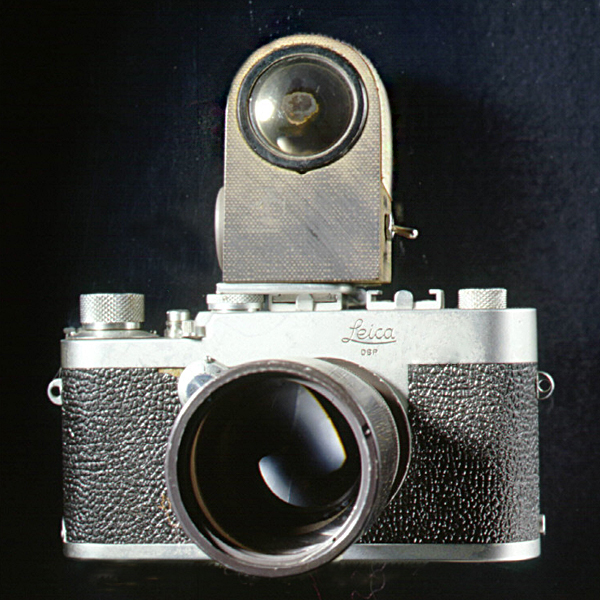 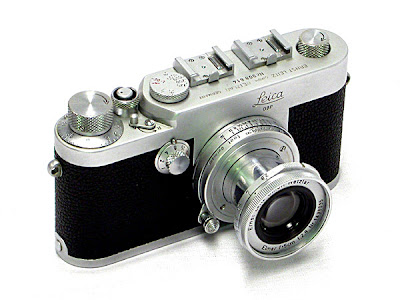 A little known fact is that a Leica M3 accompanied the astronauts on a September 1995 Endeavour space shuttle mission.  As reported by the Houston Chronicle… 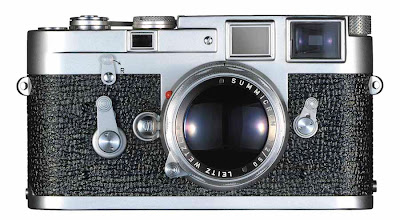 ""I think the world of that camera," said Patnesky, who shuns more modern gear with the automated features that focus and advance film in favor of the all-manual Leica M3.

Patnesky fretted over the Leica's absence during its orbital journey aboard the shuttle Endeavour last September. The separation was prolonged for several weeks after the shuttle's return so that the Leica could be unpacked and its journey officially documented.

""I feel kind of naked without it," he joked recently, clearly relieved that the old camera was available once again for his patrols of the space center's astronaut training facilities.

""None of the other dingbats would use it. So I said, `Hey, give it to me,' " recalled Patnesky, who spares no one, least of all himself, from his playful verbal digs.

In those days, he said, the news media was thirsty for a steady stream of photographs of astronauts as they trained for their Apollo flights in exotic locales, from the Gulf of Mexico where they rehearsed post-splashdown procedures in rough seas to the deserts of Mexico.

During one of the Mexican excursions - it was a training jaunt by Shepard and astronaut Edgar Mitchell to prepare for their Apollo 14 flight - an instructor-geologist challenged Patnesky to descend into a rocky crater for photographs.

To this day Patnesky finds the Leica perfect for his needs, rubber bands and all.

With its precise mechanics and acute optics, the old camera makes little shutter noise and requires no flash when its operator is photographing in the Mission Control Center, the space shuttle simulator or the administrative offices.

""I like to shoot on a noninterference basis," he said. ""That is how you get the best shots."

The strategy has permitted Patnesky to photograph all of the American presidents with astronauts from John Kennedy to Bill Clinton. It allowed him to capture the drama of the Challenger accident as it was reflected in the faces of the personnel in Mission Control, as well as the majesty of Anwar Sadat, the late president of Egypt, during a state visit.

""My friendship with the astronauts means a helluva lot to me. I admire those guys for all the hours they put in," said Patnesky. ""One way or another I've photographed every one of them."

My continued research into Leica cameras that were used by NASA has yielded another interesting result.  This Leica camera was used in conjunction with a spectrograph and was used on the Gemini V and VIII missions. Longer missions during the Gemini program gave astronauts more time for scientific experiments, often created and monitored by other government agencies or academic institutions. Scientists at the U.S. Weather Bureau (now NOAA) created this camera attachment so it could simultaneously record a spectrum and an infrared image to determine cloud heights. 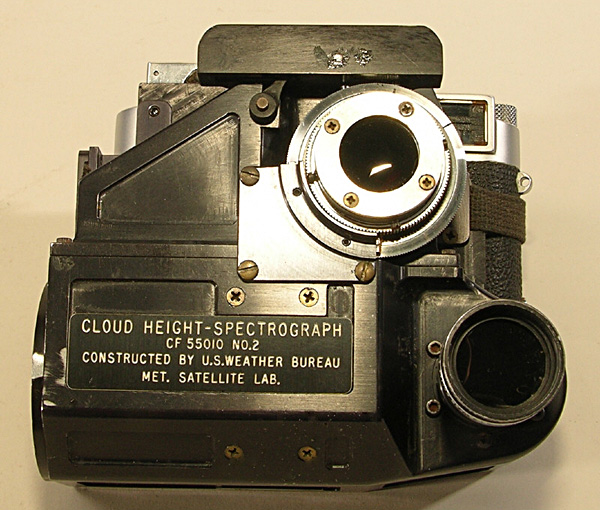 The camera appears to be a model M3.  It is unknown if any special modification were necessary for this specialized use.

It is not known if any current Leica equipment is being used by NASA.  The delay by Leica to introduce top level digital cameras leads me to believe that other manufacturers might have been chosen.  However, this is an ongoing research project and should new information become available, you will read about here.