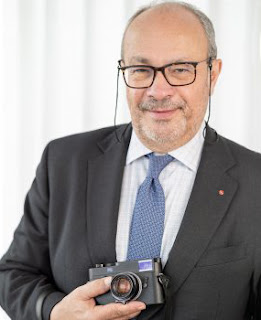 German photography magazine PROFIFOTO repoprts that Dr. Andreas Kaufmann was awarded the German Federal Cross of Merit already in 2020 for his economic commitment to the Wetzlar region, but has not yet been presented with the award due to Covid-19.  In a special ceremony German Federal President Frank-Walter Steinmeier finally was able to get the award into Dr. Kaufmann’s hands.

As the current Chairman of the Supervisory Board of Leica Camera AG, Dr. Andreas Kaufmann has been determining the company's fortunes for over 15 years. "With great personal commitment you saved a traditional German company from collapse and turned it into an unprecedented success story," said the Hessian Prime Minister Volker Bouffier in his laudation: "You use your entrepreneurial work not only to create and secure jobs, but also share it with the city and the location of Wetzlar.  Thus, the citizens of the region decisively share your success. ” In his appreciation, Volker Bouffier particularly emphasized that Dr. Andreas Kaufmann made "an important contribution in the field of economy and culture for the benefit of society, not only in the state of Hesse".

Due to his family background and professional career, Dr. Andreas Kaufmann is not only a successful entrepreneur, but his commitment, entrepreneurial flair and personal interest in photography have found each other in the best combination. As a passionate photographer and “ardent Leica admirer”, it was his heart's desire to preserve the tradition and perfection of handcrafted cameras.

With great personal and financial commitment, he ensured the success of the company. Not only in the further development of camera technology, but also in the expansion of marketing and, above all, in the visionary founding of the Leitz Park in Wetzlar. Production and administration with around 800 employees from Leica Camera AG have found their place here, alongside other employees from the ACM group: Viaoptic, Weller Feinwerktechnik and Ernst Leitz Cine Wetzlar. In addition, the Leica history can be seen in the specially founded Ernst Leitz Museum at Leitz Park. With his diverse innovations and investments, Kaufmann has further expanded the global reputation of the renowned company and made the Leica brand shine again.

Dr. phil. Andreas Kaufmann was born in Mannheim in 1953, received his doctorate in literature in 1991 and worked as a teacher at a Waldorf school in Göppingen until 2000. Together with his brothers and Wolfgang Kisselbach from Wetzlar, he founded ACM Projektentwicklung GmbH in 2001. With the entry into the traditional Wetzlar company Leica in 2004, the impending insolvency could be averted in 2005 and through targeted restructuring led to economic consolidation over the next few years. His commitment to the common good was awarded the Hessian Order of Merit in 2015, and in 2017 he received the German Founder Award. Andreas Kaufmann is married, has three children and lives in Salzburg.

Posted by LEICA Barnack Berek Blog at 9:30 AM