THE BIGGEST ENLARGEMENTS EVER MADE

By Heinz Richter
For a while one could almost expect that each new digital camera was offering a higher pixel count than its predecessor.  This lead to the misconception that the higher the pixel count, the better the results. That race has slowed down considerable and the majority of high end digital cameras today have a pixel count of +/- 25 megapixels with few exceptions, like the Leica M10 P offering virtually twice the resolution. A high pixel count still sells.  This was especially the case when we had to deal with 1 or 2 megapixel cameras.  But those days are gone, and manufacturers have put more effort into improving sensors other than just increasing the number of pixels offered.  We now have cameras with incredible ISO sensitivities, low noise, great color accuracy, high res video capability etc.
So the question is, how big an enlargement one could one possibly make with a high quality, full frame sensor.  I researched the topic and wasn’t able to come up with anything definite.
Being that today’s full frame sensors use the same image dimension as 35mm film, I included 35mm film in the equation. That doesn’t mean that we can simply equate a 35mm negative with files obtained from a full frame sensor, as a mater of fact, there are several factors that lead to a slight image degradation with film that do not exist with digital sensors.  Based on that, one can reasonable expect that a high quality full frame sensor can deliver an image with a resolution at least as high as a 35mm negative. 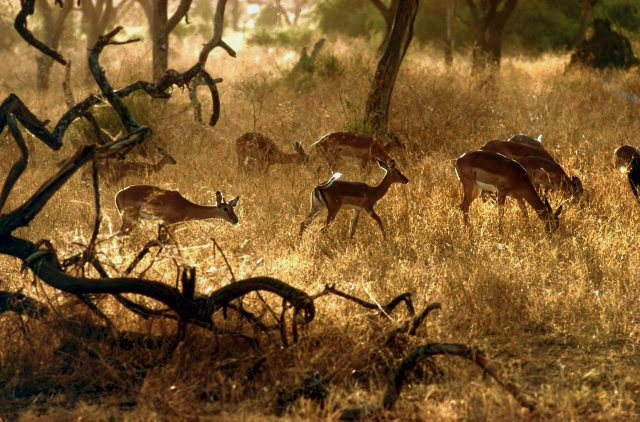 Ernst Haas image chosen for the Kodak Colorama
The biggest enlargement ever made of a 35mm photograph was the one for the Kodak Colorama at Grand Central Station in New York in 1977.  The original picture was taken by Ernst Haas with a Leicaflex SL and a 50mm Summicron-R lens on Kodachrome 25.  The finished Colorama consisted of 20 vertical panels of 3 feet width and 18 feet height for a total size of 18 x 60 feet This was the first time a 35mm picture had been used for this project.  It presents a 508 times enlargement to achieve the width of the image.  It was a definite testament of the quality of the film and that of the Leica camera and lens.
Based on modern sensor technology, we can reasonably expect enlargements of the Kodak Colorama size to be as good or better than what was done back in 1977.
That brings up the question of what the largest picture ever made might be.  A little research rendered the following result:
The largest picture ever was made with what is certified by the Guinness Book of Records as the largest camera in existence.  It is basically an old hangar building at the disused El Toro Marine Corps Air Station in Southern California, which has been made light tight to ensure no light gets in except through a little pinhole in one side of the hangar. To create the image which is described as "The Great Picture", a huge sheet of made-to-order canvas was suspended inside the hangar and coated with 80 liters of a liquid photo emulsion made by Liquid Light.  This made the entire canvas photosensitive. The exposure time of the world's largest camera was set to approximately 35 minutes, after which the canvas was developed in a pool of 2300 liters of developer.  Needless to say, photography at this scale does not come cheap!  The world's largest photo was 313 square meters (3375 square feet) in size.  That compares to a standard 35mm film frame of 24 x 35 millimeters, which equals 8.64 square centimeters, or 0.00864 square meters.
While this is certainly a very impressive achievement, this camera is definitely quite limited in terms of subject matter.
In 1900, the Chicago & Alton Railway decided that they wanted a mural of their Alton Limited train to hang on the wall of their headquarters.  There was no suitable enlarging equipment available at this time.  Virtually all photographs were contact printed, meaning that the negative needed to be of the size of the final print.  To solve this problem, they hired the J. A. Anderson Company of Chicago to build what turned out to be the largest, portable camera ever.  The camera weighed 900 pounds and was designed to take photographs on an 8 x 4.5 foot photographic plate, which added another 500 pounds to the weight of the camera.  An exposure time of 2 ½ minutes was necessary to take the photograph.  This was the largest photograph ever until “The Great Picture” was taken many years later. 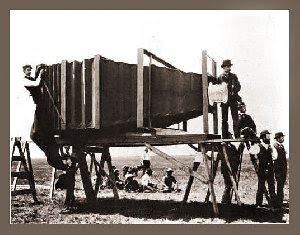 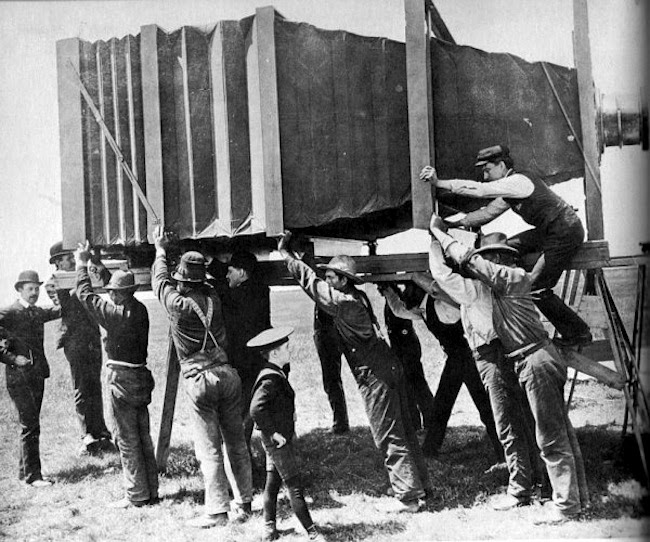 The Alton Limited train picture taken with the Mammoth Camera
What does this have to do with Leica?  Basically nothing, but it is interesting to see what efforts have been taken by some to go into the opposite direction of Oskar Barnack when he designed the Leica.  It is interesting to note though that the railroad picture could easily have been taken with a Leica, considering that the Kodak Colorama image by Ernst Haas had a dimension of 18 x 60 feet, making the railroad picture of 8 x 4.5 feet rather small in comparison.  Of course the difference in camera size is much greater; the first Leica was designed by Oskar Barnack just a scant 13 years after the Mammoth camera.