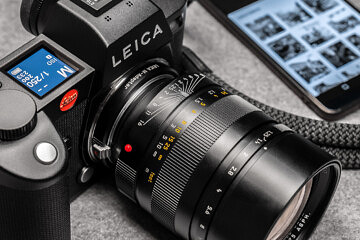 Today, Leica has announced a new promotion on its SL2 and SL2-S professional mirrorless cameras. From July 1, 2021 through September 30, 2021, those purchasing a brand new SL2 or SL2-S body or bundle will receive a free M-Adapter-L. Regularly priced at $450, the M-Adapter-L allows for use of Leica M rangefinder lenses on the SL2 or SL2-S. This promotion doesn't replace the existing $600 savings of the 24-70mm Vario-Elmarit-SL promotion we reported on along with the launch of the new lens, as you can take advantage of both the bundle savings and still get a free M-Adapter-L. Not a bad deal.

With such incredible native SL zoom and prime lens choices, why would anyone even consider using a manual focus M lens on an SL2 or SL2-S? We can think of a few reasons., so let's dive a little deeper.

Leica M lenses render quite differently than SL optics. Sure, all Leica lenses are lovely, but M lenses provide a more classic look with a bit more character. And that's just modern M lenses. Diving into the back catalog of pre-modern and vintage glass opens up entire palette of creative possibilities. So even if you use a 24-70mm f/2.8 Vario-Elmarit-SL or 35mm APO-Summmicron-SL as your daily driver, sometimes you want to get creative with a 1960s-era 50mm for a retro look you can't get in Photoshop.

SL lenses are incredible performers, no doubt. But they aren't the most compact lenses either. Even the smallest native lenses, the APO-Summicron-SL range, sport a 67mm front diameter. By comparison, most M lenses feature a 39 or 46mm front filter size. A 28mm f/2.8 Elmarit-M ASPH or 35mm f/2 Summicron-M ASPH are downright tiny on an SL2 body, reducing the overall size and weight of the camera.

The SL2 and SL2-S both feature highly effective sensor-based image stabilization, also commonly referred to as IBIS. And this image stabilization works equally well with M glass as it does for SL lenses. Offering four to five stops of stabilization, the SL2 or SL2-S allows for much slower hand-held speeds than an M camera. While M cameras have always been known for their ultra-low-vibration shutters, the SL2/SL2-S IBIS just works like magic.

Along with the image stabilization, the 5.76MP EyeRes EVF is simply stunning to look through. Crisp, bright and detailed, nailing focus on even the most challenging M lenses like the Noctilux is a piece of cake. Focus peaking helps too, but is often unnecessary given the high-resolution of the viewfinder and the ability to zoom to 100% with the tap of a button.