© jmse
In 2006, Leica Camera AG manufactured two prototypes of a new true one of a kind lens: the huge Apo-Telyt-R 1600 mm f/5.6, featuring a weight of 60 kg and dimensions of 1.2 m long (1.55 m with the lens hood attached) x 42 cm barrel diameter.
The origin of this behemoth extreme telephoto lens came from an order by Sheikh Saud Bin Mohammed Al-Thani, former Minister of Culture of Qatar (demised in 2014), who wished the creation of this massive and exceedingly heavy out of parameters lens, whose use must be something really cumbersome, 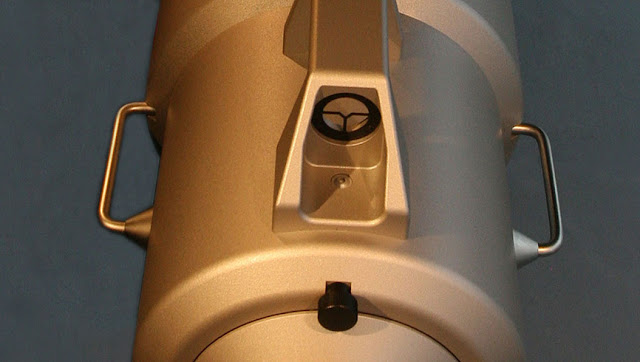 © jmse
to such an extent that it has two big handles, taking it for granted that a minimum of two men will be needed to transport it. 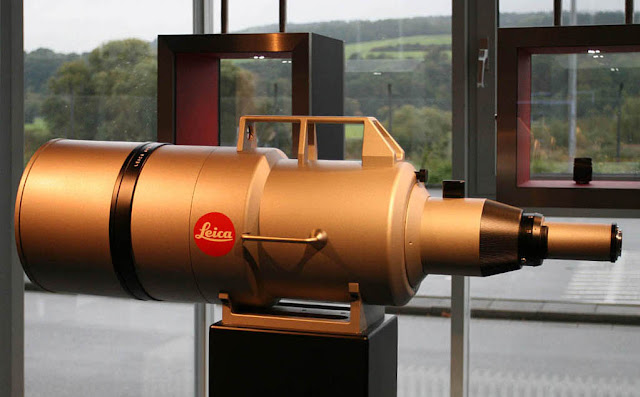 © jmse
Both from a cosmetic and optomechanical viewpoint, the Apo-Telyt-R 1600 mm f/5.6 is impressive, not only because of its colossal size but also regarding the amazing thoroughness with which it was built, paying attention to every detail, with stunning machining of the metallic surfaces and elegance to spare.
It is really a riveting sight to behold and the last manual focusing R lens made, belonging to the legendary breed of Leica R lenses manufactured between 1964 and 2006 and which had its peak qualitative years during the 1990-2002 halcyon days of the Leica Design Department created by Lothar Kölsch (who turned it into a competence center for aspherical technology) and which had in its staff three further world-class optical designers : Sigrun Kammans (designer of the fabulous Vario-Apo-Elmarit-R 70-180 mm f/2.8), Peter Karbe (currently the best optical designer in the world) and Horst Schröder (creator of the 01, 02, 03 and other analysis programs which were important tools for optical designing), without forgetting Wolfgang Vollrath (optical designer of the extraordinary Apo-Macro-Elmarit-R 100 mm f/2.8 in 1988). 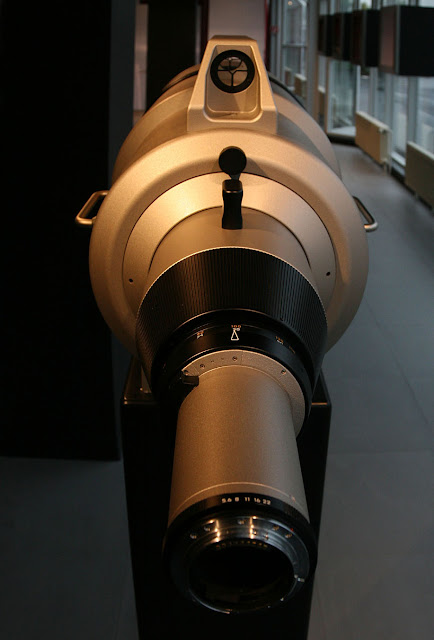 © jmse
Therefore, the Apo-Telyt-R 1600 mm f/5.6 oozes class and top-notch construction everywhere.
Pictures made with it haven´t appeared until now, but this truly apochromatic lens has to undoubtedly feature a tremendous potential in terms of image quality, as to resolving power, sharpness, contrast, correction of optical aberrations, commendable uniformity of performance between center, borders and corners at every diaphragm and distance and so forth.
Anyway, for obvious reasons, to get that potential of optical performance in real photographic contexts is virtually impossible, because you would need a more than giant tripod to support it, and achieving a minimum adequate shooting stability would be something mostly unattainable.
In addition, any attempt to change shooting position moving the lens would mean a rather strenuous effort.
Even, it was known thanks to Danish Leica expert Thorsten Overgaard that the Sheikh Al-Tani commissioned a specially equipped Mercedes-Benz with four wheel drive to carry the Apo-Telyt-R 1600 mm f/5.6 and move it around.
On the other hand, the use given by Sheikh Al-Tani to this whopping lens has remained unknown, though bearing in mind that apart from being an art collector he was a wildlife enthusiast, perhaps his aim was to photograph animals from very far distances. 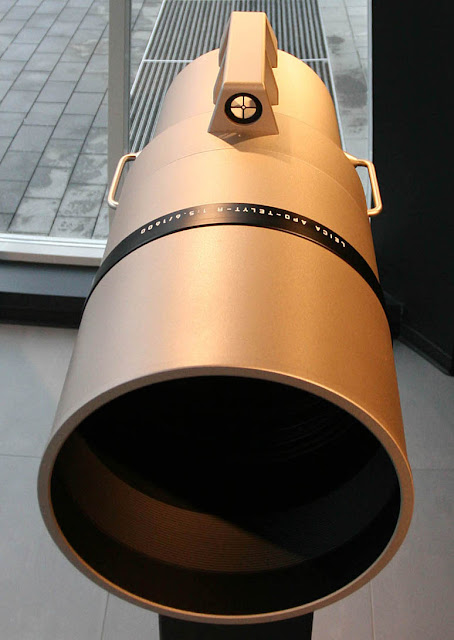 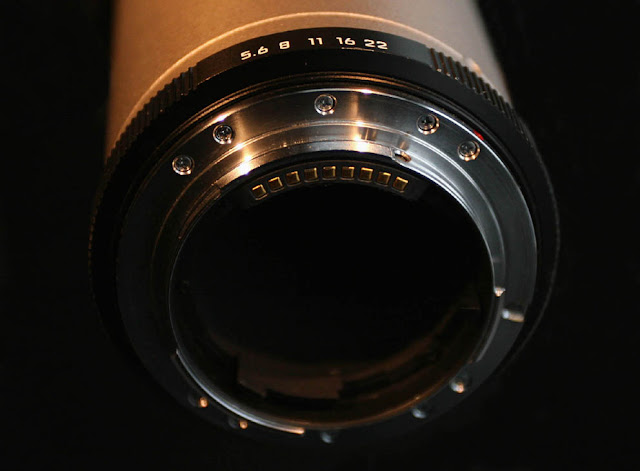 Back view of the Apo-Telyt-R 1600 mm f/5.6 exceedingly sturdy R bayonet mount, whose flange distance is 47 mm. The presence of the nine golden contacts of ROM chips in symbiosis with the R cam, suggests that this lens was designed and manufactured to be coupled to Leica R8 and R9 cameras with the Leica Digital Module R attached, to correct lens vignetting. On top of the R mount is the scale of diaphragms between f/5.6 and f/22.
© jmse
Regarding its potential connected to digital full frame cameras, image quality should be great, as happens with most of Leica R lenses (particularly the aspherical or truly apochromatic ones, delivering remarkable resolving power, sharpness and contrast with both analogue and digital models ), even with the 1.4x Leica Apo Teleconverter (turning it into a 2240 f/8 lens), but the unfeasability of achieving acceptable steadiness for such a huge lens would prevent if from getting good results. 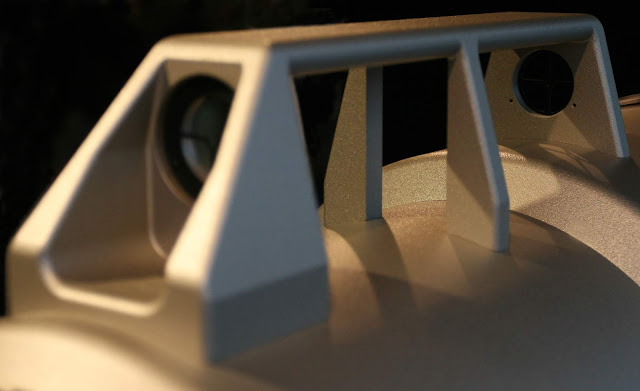 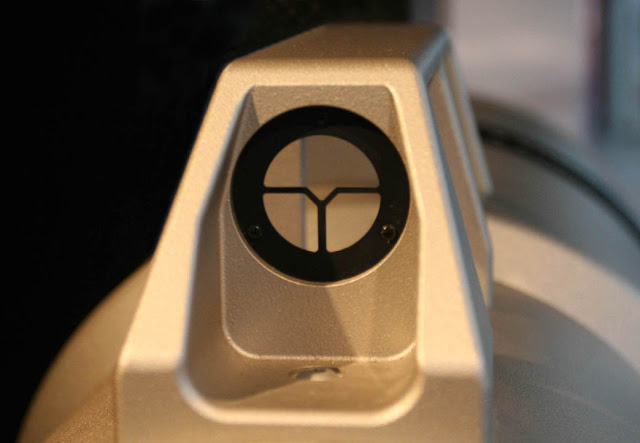 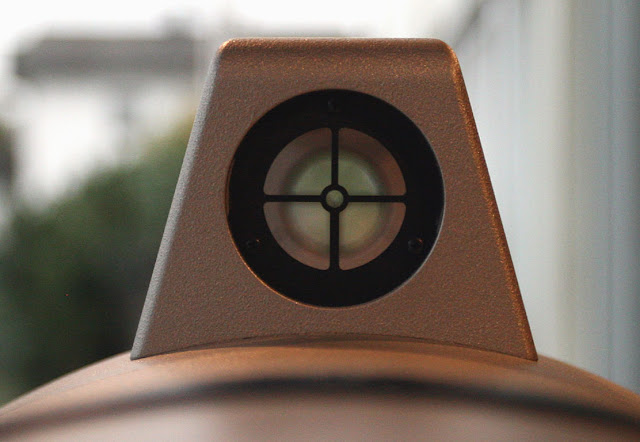 Back view of the Apo-Telyt-R 1600 mm f/5.6 cross-hair sight.
© jmse
In addition, to get accurate focus with such a hugely long focal distance lens sporting a relatively slow f/5.6 wider aperture would be exceedingly difficult, something even more apparent if a professional digital Micro Four Thirds camera like the Olympus OM-D E-M1 Mark II is connected to the behemoth through adapter to get a 3200 f/5.6 lens.
Whatever it may be, the amazing digital technology has brought with it the possibility of achieving great results at high sensitivities (while in the analogue era using films beyond iso 800 usually meant excessive grain and loss of detail), expanding very much the use of relatively low luminosity super tele objectives connected to digital cameras to avoid trepidation or blurred images, to obtain very good sharpness.
Therefore, though the gorgeous German behemoth is the beyond 1000 mm world reference-class lens ever made in opto-mechanical performance potential (albeit virtually impossible to draw because of its size and weight) and plays in another league, in my opinion, infinitely much cheaper, and far better choices than the Leica Apo-Telyt-R 1600 mm f/5.6 to get good photographic results in real photographic contexts, approaching as much as possible to so long distances, would be:
-  A 3 elements in 3 groups Takahashi TSA-102S Triplet Super Achromat 816 mm f/8 refractor telescope (diameter of 114 mm, tube length of around 795 mm and a weight of 5 kg) connected to a professional digital camera. The reach could be increased to 1142 mm f/11 with an 1.4x converter and to a 1632 mm f/16 with a 2x converter. This superb telescope delivers an extraordinary optical performance and features a price tag of between 2,000-3,000 euros.
- The Olympus M. Zuiko Digital ED 300 mm f/4 IS Pro (equivalent to an incredibly handholdable 600 mm f/4 lens with a very efficient stabilizer), featuring a 92.5 mm diameter x 227 mm length and a weight of 1.27 kg, with a price of roughly 2,000 euros. Attached to the excellent MC-14 1.4x teleconverter it turns into a 840 mm f/5.6 lens with barely loss of image quality, and if coupled to the MC-20 teleconverter it becomes a 1200 mm f/8 lens.
- The 19 elements in 11 groups AF-S Nikkor 500 mm f/5.6E PF ED VR (with a length of 237 mm and weight of 1460 g) coupled to a 1.4x converter, turning it into a 700 mm f/8 lens or attached to a 2x converter turning it into a 1000 mm f/11 lens. Its price is around 4,500 euros
- A manual focusing 4 elements in 4 groups Takumar SMC 500 mm f/4.5 from 1966-1971 in M42 mount coupled to a professional digital camera through adapter. With a 1.4 x converter, the reach would be a 700 mm f/6.3 and with a 2x it would be a 1000 mm f/9 lens
This isn´t obviously a stellar performer lens, but delivers good image quality, features a 126.5 mm diameter x 440 mm length, its weight is 3,500 g and can be found at prices between 300 and 500 euros in good condition.
- The Leitz Telyt-R 560 mm f/6.8, featuring two elements cemented together to make a single optical group with only 2 air/ glass interfaces. It has a length of 530 mm and a weight of 2 kg.
It isn´t a telephoto, but a long focus lens, and in spite of its apparent field curvature, delivers a great image quality in the center and simply acceptable in corners.
It yields very natural colors, its contrast is slightly lower than the also excellent Leitz Telyt-R 400 mm f/6.3 and can be found in very good condition for approximately 500 euros.
Connected to the superb APO-Extender R 1.4 x teleconverter it turns into a 784 mm lens with barely loss of image quality and connected to the also superb APO-Extender R 2x teleconverter becomes a 1120 mm lens, there will be a significant drop in luminosity and optical performance.

Posted by LEICA Barnack Berek Blog at 10:22 AM