By Heinz Richter
The Apollo 11 moon landing 52 years ago wasn’t just a giant leap for mankind – it was also a historical event for the Ernst Leitz optical factory in Wetzlar, Germany. NASA, based in Houston (Texas), had ordered a special Leitz Trinovid from Ernst Leitz GmbH for the lunar mission in July 1969. The original Leitz Trinovid manufactured for the Apollo 11 mission can be found in the Leica Camera AG archive.

Neil Armstrong and Buzz Aldrin landed on the moon 51 years ago: on July 20, 1969. The Leitz Trinovid specially developed for the Apollo missions is a monocular, consisting of one tube focused over the central bar. Mainly for weight reasons, the NASA scientists had decided on a customized version – the special monocular known to this day as the “Eye of Apollo”. In addition to the monocular, NASA also used other products from the Ernst Leitz company: Leitz microscopes were employed in their laboratories to examine the moon’s rocks, and the launches of Saturn V rockets with Apollo spacecraft were documented using Leica and Leicaflex cameras. 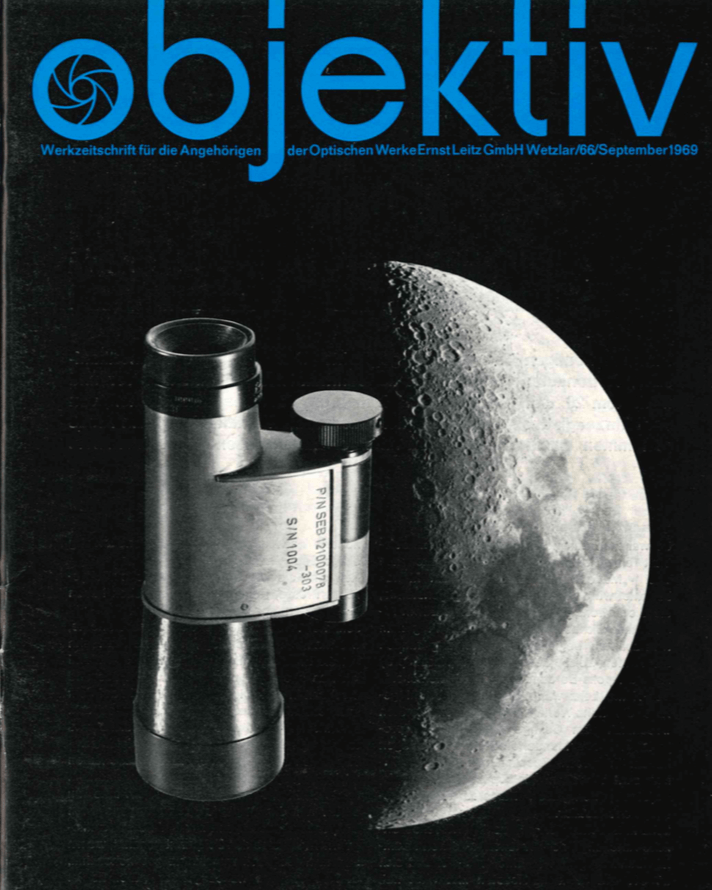 “Our monocular TRINOVID 10 x 40 already flew with the Apollo 8 and Apollo 10 missions and was an important navigation aid for the crew of Apollo 11 and the lunar module ‘Eagle’. According to NASA research, it proved to be the best of our many glasses offered for this mission,” noted Jerry Rzeznik, a Leitz employee at the time, in the September 1969 issue of the Leitz employee magazine Objektiv. Jerry Rzeznik also provided detailed information on where the Leitz Trinovid monocular was used: “We all know that the moon can only be reached with multi-stage rockets. There are separations of the individual stages, disconnections and couplings of spacecraft. These difficult maneuvers require precise preparation and timely detection of the arriving and departing parts. (…) At the speeds the spacecraft were traveling at, it was necessary to locate them from a distance of about 300 km.”

Posted by LEICA Barnack Berek Blog at 10:58 AM