In 1979, Photo Visuals of Minneapolis was the first camera store in the US to sell exclusively Leica equipment.  Initially the business was planned as a photography studio.  Prior to that, the owners worked at a store that sold more Leica equipment than any other in the area.  The Leica representative at the time called them, saying that he could not afford to lose their expertise and customer base.  Leicas had always been a favorite of the two owners and with the help of Leica, at that time in Rockleigh, New Jersey, they placed an opening order to obtain a Leica franchise.  Once the order arrived, thoughts turned to how best to promote it.  That’s when the thought came up to promote it as the first exclusively Leica dealer in the country.  The concept took off beyond expectations and the studio aspect of the business was soon left behind. 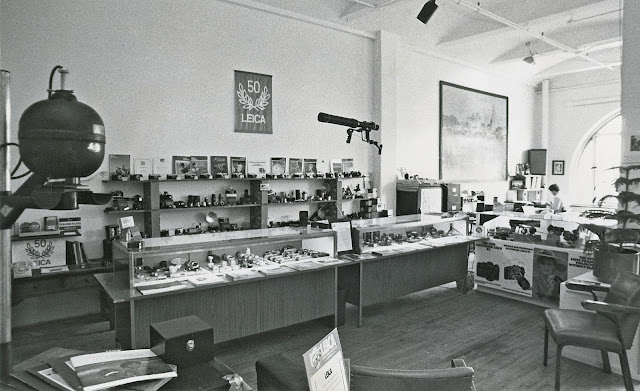 But this is not only found in the US.  Germany too has dealers that sell just one brand exclusively.  The German magazine FOTOwirtschaft recently published an article by Klaus Jendrissek with the title LUXUS PROBLEME (Luxury problems) about one of the largest Leica dealers in the country.  That too is an exclusively Leica store.  He wrote:

For a Leica 50mm f/0.95 customers gladly pay 8,000 euros ($10.500) if it is available.  If not, Jan Dittmer will put their name on a waiting list.  When new deliveries arrive, the customers will be notified.  Customers often wait two years for some Leica products, and they understand.  These cameras and lenses are being made by hand with great care and that takes time.

That is the unproblematic part of the concept which is followed at Dittmar’s Leica Boutique.  The difficulty on the other hand is to be able to obtain certain pieces of equipment.  It’s not that Leica doesn’t care, but with their production methods they currently aren’t able to do more.  Dittmar’s customers can see that for themselves.  Several times a year the Leica man offers invitations for trips/workshops to the Leica factory in Solms.  There they can experience for two days that real specialists are needed to create the optical-mechanical marvels, and people with that kind of experience and such golden hands are rare.  The consequence: the customers will be able to look forward to their orders for longer than they had hoped.