By Frank Breithaupt
Reprinted by permission
From News Photographer
December 1978

It was early morning, one hour before the vacationing President was scheduled to make his way by raft down the Salmon River.  Around a bend, half-mile downstream were several photographer on a swinging footbridge.

When the President’s raft came into view, Harry Cabluck started making exposures with his hand made 800mm Leitz f/6.3 lens at 1/125th of a second with his tripod mounted camera on a swaying bridge.

Cabluck, a 10 year veteran of the Associated Press, insists that the shot shouldn’t have worked.

Instead, he captured a classic last august – a tight photo of President Carter’s raft floating down the river with the President standing monumentally in the bow like the famous Leutze painting of George Washington crossing the Delaware.

“It’s the first time in my life I’ve ever planned something and executed it just the way I thought it would be,” Cabluck said.  “Hell, even getting married wasn’t planned out that way.”Cabluck has a history of getting pictures no one else does because of his planning and his 800mm prototype: the “agony and the ecstasy” at the 1976 Olympics, the Carter family after the Inauguration walking down Pennsylvania Avenue with the Capitol dome in the background, and key plays in baseball games where his attachment to the lens began.

With AP in Pittsburg, Cabluck borrowed the prototype from Walter Heun, technical director for E. Leitz, Inc., for use in the 1974 All-Star game in Pittsburg.

In Heun’s hands, the lens had been used to photograph the Apollo 8 launch on December 21, 1968, of Borman, Anders and Lovell on a 147 hour lunar flight.

Once in Cabluck’s hands, it was lost to Leitz.  “They figured it would be better to sell it to me than to just let me have it,” Cabluck explained.

With his 800, Cabluck said that getting the picture is not all that difficult.  “It’s not so much me as the lens,” he said.  “A lot of people think that it’s me, but anybody with that lens in their hands is going to make a good picture.”

As Hal Buell, AP’s assistant general manager for news photos put it, “Harry knows how to use that lens.  And when to use it.  It’s an excellent piece of glass and the whole thing comes out to nice pictures because Harry’s a very talented buy.”

Putting himself into a situation where he can use his lens is where Cabluck”s real talent comes in.

With a call to The Idaho Statesman, Cabluck checked lighting, distances and angles.  He talked to the White House people.  The weight of the lens – 32 pounds – was a factor.  “I figured, what the heck, I’d carry the 800 out there.  It’s a pain in the neck, but I just live with it.”

The white House said he wouldn’t have to carry his equipment – two Halliburtons, one for the camera, the other for the 800 – more than 50 yards from the helicopter landing area to the footbridge.  “I said great!  I can carry everything 50 yards.”

But then surprise.  The helicopter left and Cabluck had to lug his two cases a mile to the pickup point.  “It seemed like five in that altitude.  And I am just cussing myself all the way – you idiot, I said, the pictures won’t work, they’re soft, the film is all bad, the light was so bad… an 800 from a swinging bridge, the raft is moving right at us, the bridge is moving, my heart is beating and it shouldn’t have worked.  Who would shoot an 800 on a tripod at a moving raft even if the camera was bolted to the earth?”

But after processing it was all worthwhile.  Weeks later he was still doctoring his elbows from carrying his cases that Idaho mile. 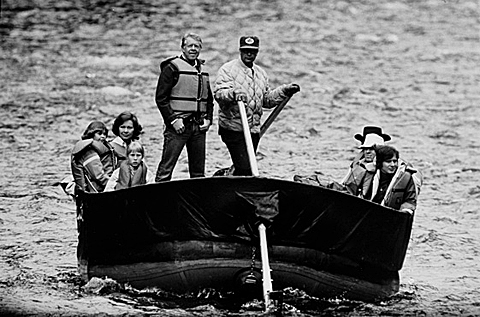 During his decade years with AP, Cabluck has been sent as far north as the Montreal Olympics, as far east as Yankee Stadium, as far south as San Juan, P.R., and as far west as Beijing, China.

Cabluck has become known as “Dancing Bear and his Magic Lens.”

“There’s just a certain superstition I have about it – I’m not superstitious, ordinarily, except when it comes to that lens.”

Cabluck was a staff photographer at the Fort Worth TX Star-Telegram for 11 years (his brother, Jarrold, is a Fort Worth freelancer).  Harry Cabluck recalled the first shot he sent fro AP over the Star-Telegram transmitter – the aftermath of an unconfirmed tornado in 1958:

“It was just a cop standing on the side of a building.  A crummy picture.  But I got all caught up in the excitement of having my picture transmitted.  I was the guy that made the print, wrote the caption, wrapped it around the drum and watched the thing go.  It was a big thrill.”

Cabluck’s superstition may be a gag with AP staffers.  Nevertheless the say, “This looks like a job for Harry and his magic lens.”

And Harry does the job.

The Leitz 800mm f/6.3 Telyt-S  was of a similar optical design as its shorter companions, the 560mm f/6.8 Telyt and the 400mm f/6.8 Telyt with one definite difference.  While the two shorter lenses had only two elements in one group, the 800mm lens was designed to consist of three elements, also in one group.  That offered the additional optical corrections needed for such a long lens. 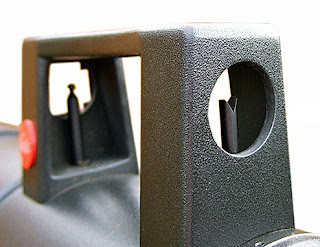 For easier carrying, the lens had a built-in handgrip,which also contained a gun type sigt for easier initial aiming.