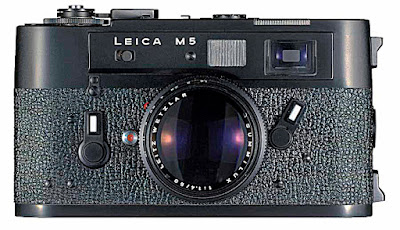 By Heinz Richter
A lot of people never have the opportunity to use their cameras in freezing temperatures.  Needless to say, that is not a problem here in Minnesota.  Even though as of late  winters have been relatively mild, there are no guarantees that this might not change.  I have been out shooting in temperatures as low as -30F.
This brings up the ever reoccurring question if we need to treat our cameras differently in cold weather?  The short answer is ‘not really’.  These days, when our cameras rely more than ever on sufficient battery power, we should, however, be aware that they don’t like low temperatures very much at all.  Subsequently, one or two fully charged extra batteries are definitely a good idea.  Carried in an inside pocket, to keep them warm, should prevent any mishaps of camera failure due to lack of battery power.  In addition, it is advisable to carry the cameras underneath our clothing as well to keep them from getting any colder than necessary.
It is also very much advisable not to breathe on your camera, especially the glass of your lenses and the viewfinder.  They will instantly be covered by a frozen layer of moisture which will not evaporate.  On the lens it will function as a dense diffusion filter and the viewfinder will be rendered almost useless.
Finally, carry along a ziplock bag, big enough for the camera and lenses.  After a while of shooting, when getting ready to back inside, put the camera, lenses and other equipment into the plastic bag and seal it.  This prevents the warm, moist inside air to get into contact with the equipment.  Otherwise the result will be that the moisture condensates on the cold camera equipment.  Excessive moisture and cameras simply don’t mix.  Keeping the camera equipment in a closed case will also work as long as it is not opened.
Such was the case a few years ago.  It was a bright, sunny day; picture perfect for some nice winter shots, except the temperature had dropped to -30F with little chance of any noticeable warm up.  While a lot of people would stay inside, this really isn’t all that bad, as long as you dress properly.
I had just acquired a new Leica M5.  For years I had heard of the impressive resistance of Leicas to cold temperatures and I had long hoped to have a chance to test this..
Since the weather forecast was predicting temperatures as low as -30F, I decided to test the M5.  To give the camera a head start, I put it in a freezer overnight. (Don’t forget that the temperature in an average freezer is almost balmy compared to -30F) The next morning the thermometer did indeed read -30 degrees.  I set out to take photographs.  I purposely carried the camera on a strap, outside my clothing, to make sure it would get as cold as possible.
I walked to Minnehaha Park part of which runs along Minnehaha Creek as it winds its way toward the Mississippi in a relatively deep ravine.  This was carved out over the years by Minnehaha Falls. 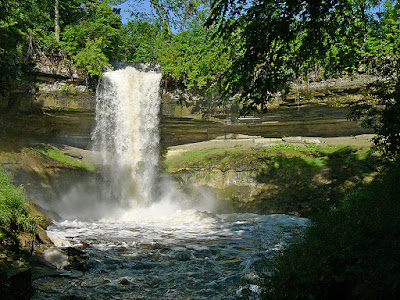 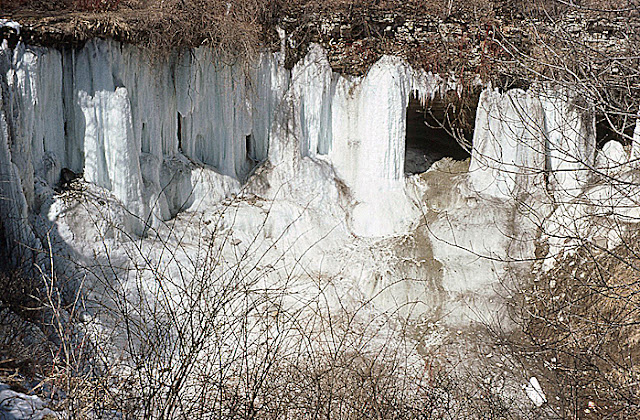 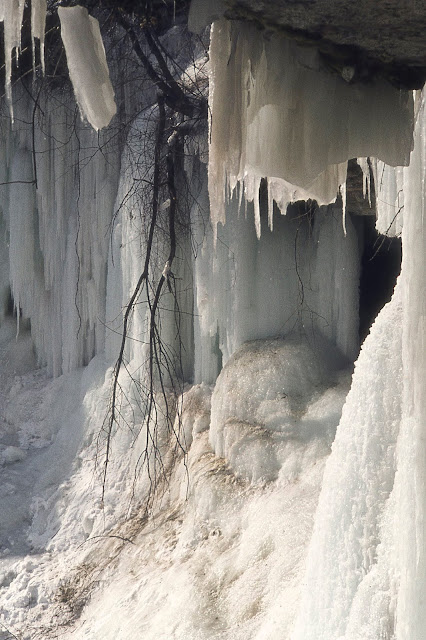 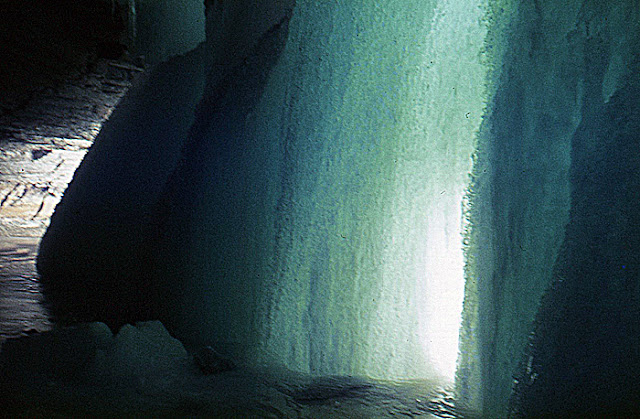 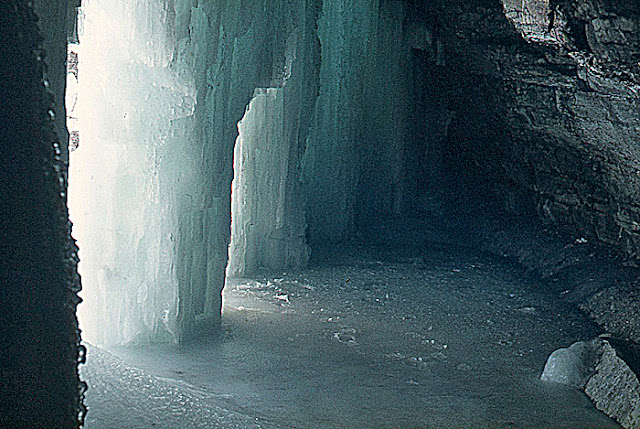 I began to take pictures, but was restricted by the ice which only allowed moving behind the main waterfall.  The rest was too treacherous to walk on.  Of the series of shots that I did take, three stood out as particularly good.  The camera worked flawlessly.  The only indication that it was extremely cold was the focusing of the 50mm Summicron which was noticeably stiffer than under normal circumstances.
I had been shooting for a while when I decided to go home.  Once I returned, against my own advice, I went right inside, forgetting about the plastic bags.  To my horror, the camera instantly froze over with about 1/8 inch of solid ice.  The camera was so cold that the condensation froze immediately.  As it warmed up and the ice thawed, I immediately wiped it off.  The camera showed no ill side effects and served me well for many years after that, but I never ventured up that ice field again.  Common sense dictated that it was too dangerous.
That was obviously some extremely rough treatment and I certainly don’t recommend subjecting any of your cameras to such torture.  But it showed that Leica’s claims in regard to cold weather operation are not exaggerated.
I have long since switched to digital Leica equipment and I have refrained from repeating that test with any of my current cameras, but I have used them at temperatures as low as about -15F with no ill side effects.  I would not hesitate to use any of my cameras at temperatures a lot lower than that.  But I don’t have anything to prove anymore, not with my cameras and certainly not for myself.  Unless absolutely necessary, I will wait for more pleasant days for my outdoor shooting.