The website of Jonathan Slack of the UK, http://www.slack.co.uk/slack/Home.html, has an extensive review of the new Leica M Monochrome camera.

Having had the opportunity to test an M9 prototype before it’s launch in 2009, it was great to have a similar chance to test the new M Monochrom.

The idea of these pages is to give you an idea of the benefits and the operation of the Monochrom, a discussion of the pros and cons, and to show some photographs taken with the camera. It’s not intended as a proper review - there are many others who will do that, besides, my job is to report problems to Leica rather than the world in general!

Generally speaking, clicking on one of the images will link you to a gallery with a larger version of the image. It’s worth noting that these images were all taken with pre-production firmware on a prototype camera, and may not be representative of images from the final production camera.
From my own point of view it was excellent that Henri arrived the day before I was due to fly to China for a fortnight. We were visiting our son, who has been working in China teaching English, and who has enough Chinese to make things a great deal easier. . . . . When I was testing the M9, the code name was P8, but the Monochrom has been called Henri. 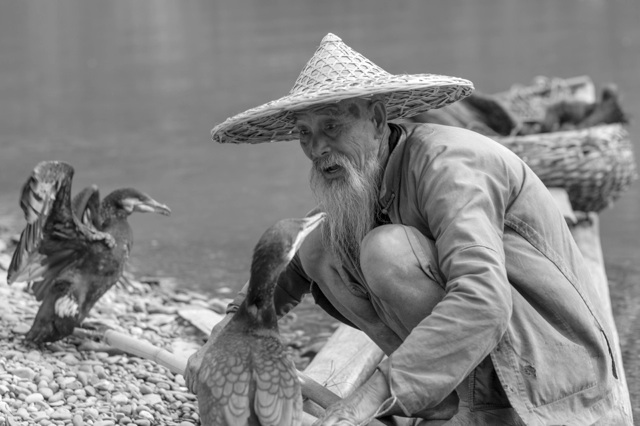 Why a Black and White camera?

Back in the early days of digital cameras - when Kodak ruled the world with cameras costing tens of thousands of dollars, they produced a 6mp black and white sensor behemoth based on the Nikon F5. The Kodak DCS 760M.

There is a very good write up of this camera by Pete Myers on Luminous Landscape . In those days the demosaicing process was not as good as it is now, and that camera produced 2 or 3 times the definition of the normal colour camera.

With a colour camera (the M9 and M9p included) the sensor itself can only detect the intensity of light, but it has a colour filter array to allow it to create colour images. The process of converting the image to colour is called demosaicing - This calculates the colour for each pixel based on the colour filter, and the results from the surrounding pixels. The colour filter array reduces the amount of light reaching the pixels by around 1 stop, and the demosaicing process has an effect on the resolution because of the combining of information.

With a Monochrome camera, you don’t need the colour filter array, This means that each pixel gets the maximum amount of light thus improving the high ISO characteristics of the camera and the dynamic range. As there is no demosaicing process there is no loss of resolution - each pixel is represented directly in the final image.

Of course, there is also a downside: Many of us have become used to converting colour files to Monochrome using the channel mixer in our processing software. This, in effect, allows us to apply filters to our images after the event. With a full monochrome camera, if you want a red filter, you need to put it on the lens rather than relying on Silver Efex Pro.

Many photographers have asked for a black and white camera over the intervening years, but only Phase have produced such a machine - and this a very expensive medium format back; the Phase One Acromatic+.  I think it’s a brave and imaginative move for Leica to produce such an interesting and unique camera, and I’m sure it’ll sell extremely well to many dedicated black and white photographers 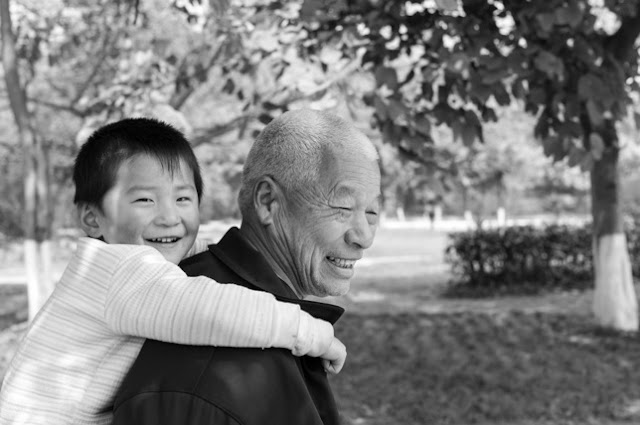 The camera is just like the Leica M9-P, except that it says MONOCHROM on the hotshoe rather than M9-P, in addition (well, in subtraction perhaps) there is no writing on the top plate, an
red dot. In fact, apart from the hotshoe, the only writing on the camera body is the standard: LEICA CAMERA  MADE IN GERMANY on the back of the top-plate.

The camera is available in Black Chrome -  the ultimate stealth camera - nowhere for the gaffer tape users here!

The LCD is the same as the M9-P, and the menus hold no surprises either. Of course, there are no white balance settings, but there is a Hue setting where you can choose Sepia, Cool, Selenium - Weak or Strong; (these settings are only available for JPG). The M Monochrom will also shoot DNG files: Leica and Adobe have agreed a standard for Monochrome DNG files - These are not quite the same as ordinary DNG files because there is no colour or demosaicing information.
The Base ISO value is 320 (with a pull value of 160), the highest ISO value is  a respectable and useable 10,000! 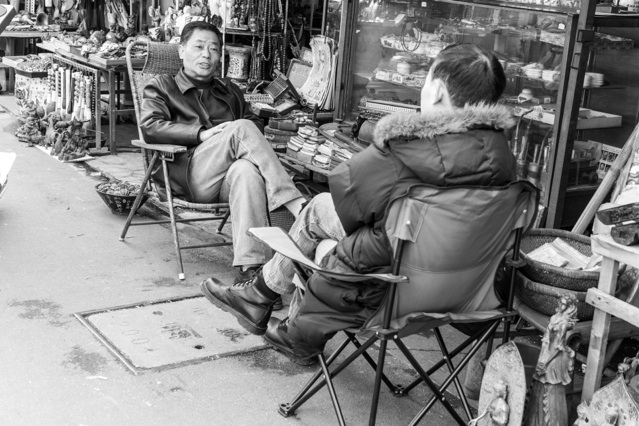 If you have experienced shooting with an M9, then the M Monochrom holds few surprises . . . apart from the ability to shoot very high ISO. The menu system is familiar, and the camera is fundamentally identical. The processing is the same, which means that the processing speed, LCD quality, viewfinder information are all the same as the M9-P. I found it a lot of fun shooting RAW+JPG, and then using the sepia option for the JPG (which is what shows on the LCD).

The biggest difference is that you really mustn't overexpose. With a colour filter array some kind of detail is usually held in one channel even in very bright light. With Henri, if it’s over-exposed, it’s over-exposed, there’s nothing to recover! Blown highlights are just that. On the other hand, there is infinite shadow detail, so that you can pull details out of really dark areas.

Having a base ISO of 320 means that there are situations where an ND filter is rather a must - it’s not easy to shoot a Noctilux wide open in broad daylight at that ISO. Theoretically it would also be useful to use the same orange and red filters you might use when shooting Black and White  film -- I took them with me to China, but in the final analysis (apart from the ND filter on the Noctilux) I found that I didn’t use them.

Shooting with a colour camera and then converting to black and white has some advantages, but it’s actually rather refreshing to KNOW that all you are getting is black and white . . . there is no chance to change your mind and use colour in the last resort. It’s a kind of discipline that can be really useful - you have to start thinking composition and contrast only, there is no escape! something I haven’t really done since the days of film.

I have to say that my wife was not overjoyed that our trip to China was going to be recorded in black and white, but I think she’s reconciled having seen the results. 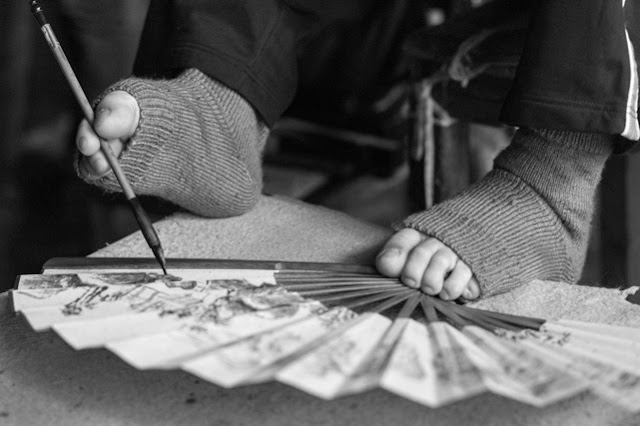 Quite simply, it’s a revelation. Quite a new experience - even at 10,000 ISO the small amount of grain is lovely, and reminiscent of fine grained film rather than digital. Of course, digital images never really look like film, but the files from Henri have a very un-processed look about them, which is presumably the result of not having been parsed through a demosaicing program.
High ISO is what most of us have been wanting on an M - well, here it is!  The fan painting shots (see the guy with the toes above) were all shot with a 90 elmarit - mostly at 6400 ISO - I think the toning and contrast are wonderful, and the amount of grain is irrelevant unless you are going to shoot billboard sized prints. The ability to keep the shutter speed safely high whe
shooting those fleeting moments is really useful, and I found I got a lot of keepers where I would really have been struggling with my M9p. 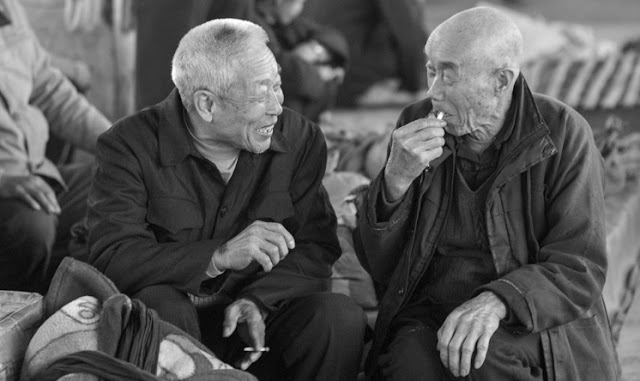 The Pictures and the last word

I like to think of myself as a photographer, and not as a blogger (honourable profession though it may be) and certainly not as a reviewer. Writing comes hard, so I’ll stop now - if you’ve enjoyed reading this, then that’s great - hopefully you’ll get more pleasure from the images!
There will be a book of pictures from China in the near future (proceeds of which will go to charity). I’ll add the link to this page at a later date. I’ve also added some links to some of my favorite sites, who will certainly have more to say about the M Monochrom.

Now I’ll stop quacking - and leave you to the images. 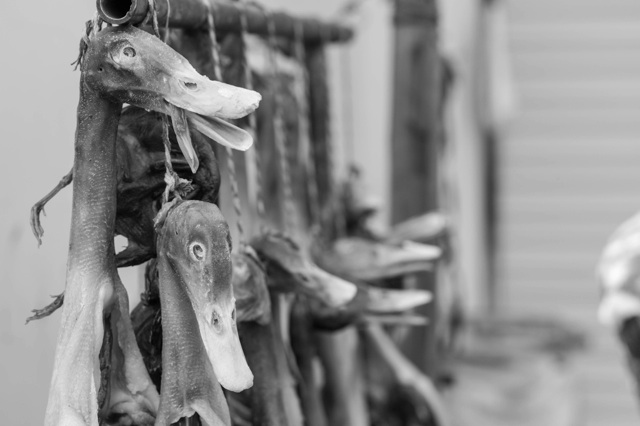 Images of China with the M9 Monochrom