A much lesser known range of lenses in the arsenal of Leica Camera are their new line of Summilux C lenses, designed for 35mm motion picture cameras and full frame digital video cameras.  The project experienced a number of delays, caused by the increased demand for Leica M lenses and cameras.  The facility in Solms needed every bit of space for the increased production of these lenses and the C lenses had to take a backseat.

To overcome these delays Leica Camera decided to construct a new, “boutique” assembly plant with the most advanced lens manufacturing techniques and equipment ever seen in a new building, in Leitz Park–where construction is now underway across the parking lot for the entire new Leica facility.

The lenses have a new aspheric design. Aspheric lens elements have a variable surface curvature compared to the constant curvature ofspherical ones.  That greatly reduces aberrations, especially spherical and geometric ones; in addition, larger apertures can be used with less aberration because less elements are needed.  The new designs allows slighter lenses with an astonishing sharpness all over the image surface and hardly any chromatic deviations.

The Leica Summilux-C lenses display their own look and texture, and they are able to deliver even the finest details, along with high contrast.  It must also be pointed out that image sharpness is very similar at the center and corners, without any noticeable fall-off.  All of the lenses transmit color in the same way, they are neutral, and perhaps slightly cold.   Aberrations are very minimized, both geometric and chromatic.

The Summilux C lenses are exclusively distributed by

For those of us who have to ask, a set of 8 Leica Summilux-C Primes will set you back a mere $178,000. Operators are standing by at Band Pro. 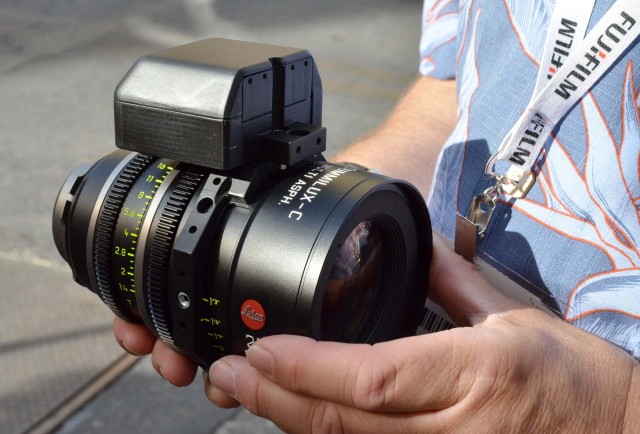 This is a prototype by cmotion seen at Cine Gear: focus and iris motors for Leica Summilux-C Primes from Band Pro. The motor assembly attaches directly to the lens with a bracket, providing a way to control focus and iris without having to use lens rods. This helps keep things light, tidy and compact for handheld, remote, Steadicam and 3D rigs.  The prototype attached with two hex screws or thumbscrews for quick mounting when changing lenses.

For more information on the Leitz Correfot go to: