A look at the development of the Leica camera shows that initially all models were finished in black.  As a matter of fact, black was the finish of choice for most medium format and small format cameras in the 1920s and early 1930s.  Initially all Leica cameras were also painted black, but in the early 30s the first chrome finished models appeared and from 1937 on, virtually all Leicas used this finish.  The only exceptions were gray finished cameras made primarily for the German military.

In 1956 the Swedish military placed a special order of 100 Leica IIIF cameras to be finished in black, including black finished lenses.  The serial numbers ranged from822901 to 823000.  Besides the black finish, another noteworthy fact is that these cameras did not come equipped with a self timer.

Since then some of these models have been found on the Leica collector market, an example of which is shown below. 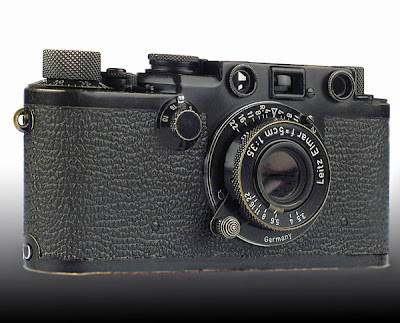