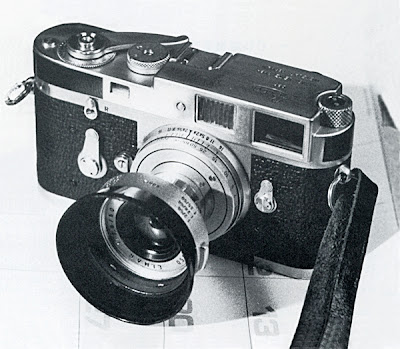 Leica M No. 1048416 arrived at the camera shop as ordered in January 1962, with a 50mm Elmar attached.  Since then, No. 1048416 has produced pictures for five different newspapers.  For several lonely years it was its owner’s only camera.  For one year it worked for the owner’s wife, producing pictures for a small weekly newspaper.  It has had a dozen different lenses attached to it during the 20 years, but usually the tiny Elmar stayed in place.

Only once did it ever visit a repair shop.  The knocks and bumps of covering urban riots in 1967 caused its rangefinder to need adjusting.

Right now it looks a bit tired.  The chrome finish is worn shiny, a bit of brass is showing through, and some of the leather is held in place with super-glue.  Black tape still protects some of the corners, though.

But when No. 1048416 is plucked from its place in the gadget bag, and its film transport handle is turned, it still feels new.  It still has the compact, solid feel that enables it to pick off pictures at 1/15 sec., or blink into a sunset at 1.100 sec.

Retirement?  Out of the question!

Sure, it has an M4-2 to keep it company now, and sometimes No. 1048416 has to share bag space with a big, black single lens reflex Leica, but its place has been permanently earned.

Whether it is on braking news events or taking pictures in the backyard, No. 1048416 still handles a hefty workload.

After all, it still delivers a 100% effort without a complaint.


Other articles by Bob Nandell:

Other articles by Bob Nandell: