Over the years, many accounts of the legendary survivability of Leica equipment under very adverse conditions have been published, yet it is always very interesting to read more about it.  Here are two accounts form The Luminous Landscape:

While I subsequently shot the 1967 Pan-American games with my Nikon F and an arsenal of long lenses, during the opening ceremonies I found myself just a few feet from the dignitaries on the podium, so I used the Leicas and 35mm, 50mm and 90mm lenses.

As Prince Philip gave his welcoming speech opening the games a huge thunderstorm broke and proceeded to drench everyone in the open-air arena, me included. Some large umbrellas were quickly erected for the Prince and he continued with his remarks, but along with about 30,000 other people I got soaked.

So did my camera equipment. I couldn't even attempt to protect my cameras, I just kept shooting throughout the torrential downpour. I changed lenses and film numerous times and just did the best I could.

As soon as the ceremonies were over I handed the film to a courier to race it to the lab and then headed back to my hotel to dry off. When I took the Leicas out of the bag they were dripping wet. Totally soaked, inside and out. I opened everything up and left the bodies and lenses on a table near an open window to dry out. I spent the rest of the day shooting with my Nikons, figuring I'd pack up the Leicas in the evening to send back to Toronto for replacement and repair.

But the next day I tried everything out and was surprised to see that they worked, and worked smoothly. I never did send it in for repair, then or afterward. I probably put several thousand rolls of film through both Leica bodies over the next few years and never saw a hint of trouble.

My assignment was to shoot skiers during this important race.  The organizers provided me with a small wooden platform on the inside of a steep downhill curve and said, "Have a nice day".

I had brought my Nikon F gear consisting of 2 bodies and several medium-tele and long lenses. At the last minute I decided to also bring the Leica M3 and 90 and 135mm lenses as well, (just in case). 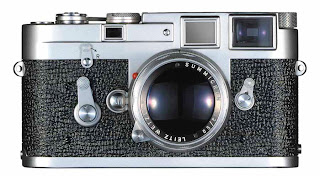 The early morning went well, with the temperature at about the freezing point and with a moderate overcast. But by late morning the wind picked up and the temperature started to drop. A light snow started and with the increasing wind created blowing snow conditions that were just this side of being strong enough to stop the race.

I wish they had stopped it, because my equipment and I started to freeze up. The first Nikon froze after about 45 minutes of these deteriorating conditions and the second one some 20 minutes later. Both were caked in frozen snow. I figured that my day was done but I pulled the M3 out from the bottom of the bag and started shooting as best I could with the 135mm lens.

I spent 3 more hours on that frozen ski slope shooting hundreds of frames with the Leica and it never missed a beat. By mid-afternoon when I called it quits I was half frozen, and my Nikons certainly were, but the Leica was like the Timex watch in the ads of the time, they just kept on ticking.

And finally one of my own

I had just added a new Leica M5 to my camera equipment.  That once again reminded me of all the claims of the legendary reliability and survivability of Leicas in general.  One thing that had always intrigued me was the claimed ability of Leicas to function in very low temperatures.  Being that we were in the middle of a Minnesota winter, I decided to put the camera to a test.  The weather report forecast temperatures of -30F for the next morning.  That seemed to be a good temperature to see how well the camera would perform in the cold. 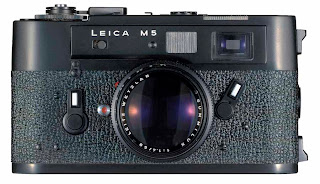 To give it a head start, I put the camera in the freezer overnight.  Then, the next morning, dressed for the occasion, I went to Minnehaha Park and down to the Minnehaha creek.  It follows a relatively deep ravine which is known to keep cold temperatures quite well.  I purposely carried the camera on a neck strap on the outside of my clothing to make sure it would cool down to the surrounding temperature.

I was out in the cold for about two hours during which I finished a whole roll of 36 exposure film.  The camera worked without problems, but I did notice that the focusing for the lens was noticeably stiffer than usual.  But that was about it.

After I finished the roll of film it was time to go home.  Contrary to my advice to others, I forgot to put the camera into a zip lock plastic bag.  I walked straight from the outside into my living room.  To my horror, the moment the camera came into contact with the warm, moist air inside, it instantly froze over with about a 1/8 inch layer of ice.  The camera was so cold that the moisture condensation on the camera instantly froze.  I watched it thaw out slowly, and as soon as any liquid formed on the surface, I wiped if off.

No harm came to the camera and it served me well for many years to come.


More about the same:

Posted by LEICA Barnack Berek Blog at 10:34 AM