THE REVISED HISTORY OF THE LEICA

We do know the account of the events that led to the development of the initial prototype of the Leica, the Ur-Leica.  I stand by my assertion that this camera was not the exposure testing device that Barnack made (see: HOW THE LEICA CAME TO BE  http://gmpphoto.blogspot.com/2012/03/how-leica-came-to-be.html).
It is with the many accounts of what happened after the development of the Ur-Leica that a lot of misinformation has been brought forth. 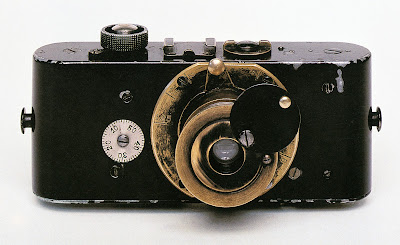 The camera that was at the Deutsches Museum was not an Ur-Leica!!!  It was 0-Series (or Null-Serie) camera No.105, which Konrad Barnack requested back from that museum and subsequently sold to Jim Forsyth of Florida. Many years later, Prof. Al Clarke of Columbus, OH and I bought out that collector, and Al kept No.105, which he later sold to another prominent collector, and Al also kept the large format camera that Oskar Barnack had used during his hikes in the woods, and which he found cumbersome and which motivated him to work on a smaller, handier camera, which led to the Ur-Leica. There is no solid proof whatsoever that there ever was a second Ur-Leica. References to a second Ur-Leica are always couched in the words "alleged", or "said to be", and this eventually creeps into the stories of superficial historians! The camera that Ernst Leitz took along on his visit to New York was the original and only Ur-Leica!

I still have that camera and the instruction booklet in Portuguese, the camera is still functional!
Next I very naively went to the local Leitz representative, where a kind elderly gentleman (Paul Louis Toinndorf) explained to me that the distributor does not handle retail matters, which are the responsibility of the dealers, but he invited me in anyway and patiently demonstrated to me what one can do with a Leica, like using a wide-angle lens, a long focus lens, a close-up attachment, etc, none of which I could even remotely afford.
He even very graciously offered to lend me such accessories, all of which endeared the man and his firm to me. Much, much later I learned that he had completed his apprenticeship at Leitz in the Hausertorwerk building, the very building where Oskar Barnack had his office, and he had met that legendary man in person! That warm treatment endeared the camera to me and created a loyalty that led to further acquaintances, all the way to the Leitz brothers and sister themselves, and even repeated stays at the Leitz villa Haus Friedwart.

I recently wrote about the possibility that I came across a picture of what might be the second Ur-Leica.  It is a picture of a camera that obviously is of the same design as the known Ur-Leica, but it is outwardly different.  I obtained this picture from the Deutsches Museum in Munich.  I contacted the museum to shed some more light on this issue.  I corresponded with Frau Dr. Cornelia Kemp, curator for photo and film at the museum.  She wrote about the camera that used to be owned by Konrad Barnack: 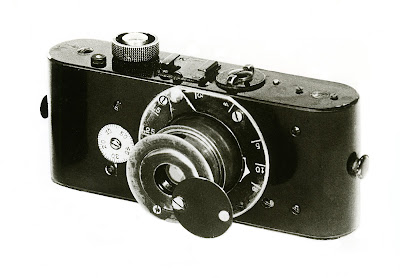 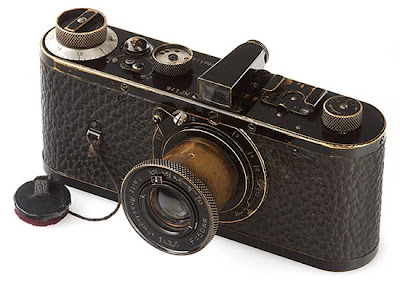 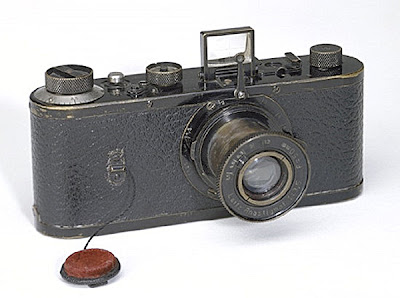 The one and only Ur-Leica (by definition, it would not be an 'Ur-Leica' if there was more than one!) traveled around for quite a bit after the Museum picture was taken in 1940. For example, the former Leitz CEO Alfred Loew brought it to Rochester, NY in conjunction with a presentation he gave at a Photo History Symposium at George Eastman House way back in the 1970s, for which I organized the program. He left the camera with me for a week while he went to Washington, DC on business and retrieved it on his way back.  Nowadays that camera is highly insured and it is treated with significantly greater caution and security. 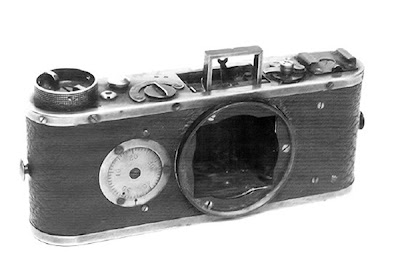 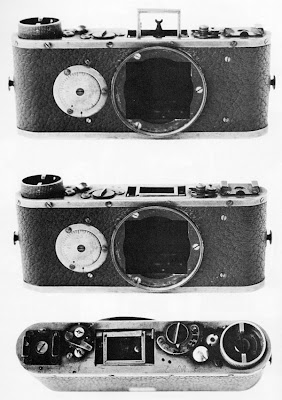 There is a large, very well-illustrated book by the very personable Dr. Günter Kisselbach, an ear-nose-and-throat doctor in Wetzlar, who is the younger son of Theo Kisselbach, the erstwhile director of the original "Leica Schule".  Guenther's older brother Wolfgang Kisselbach is the overall manager of the construction of the brand new purpose-built factory buildings and museum in Leitz Park in Wetzlar.
The book is entitled "BARNACKS ERSTE LEICA" (= Barnack's first Leica"), and it features a camera in great detail that is very similar to the 0-series camera with the same optical finder, except that it is all brass with brown leather covering and has a different flat dial between the viewfinder and the rewind knob for setting the slit width (in mm) of the focal plane shutter. Evidently Kisselbach the father kept that camera when he retired and Kisselbach the younger inherited it, and he thoroughly studied it and had it disassembled and adapted for picture taking by expert repairman Ottmar Michaeli (who was one of my speakers at one of the LHSA Annual Meetings!), all of which is beautifully illustrated in the aforementioned book.
By "First Leica", Günter Kisselbach means Barnack's first practical camera (still not named 'Leica'!) after the Ur-Leica. On page 187 of that outstanding book there is a photo of "Prototyp Nr.3" in what is left of the Leica museum, which was plundered for sales when the company was about to go bankrupt. That camera has no lens mount, a folding, recessed open frame viewfinder frame on top and an exposure counter on the front of the camera. There is no rewind knob, and the accessory shoe is located where that knob would be. 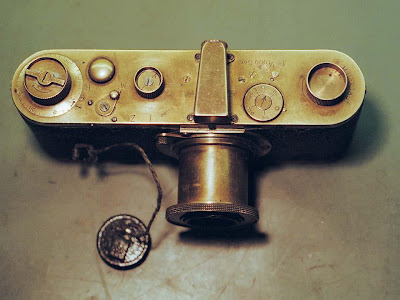 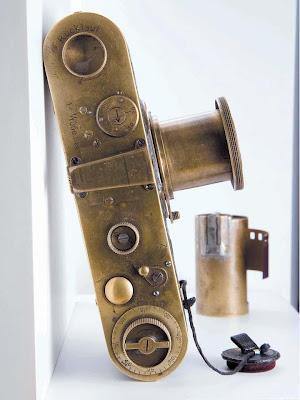 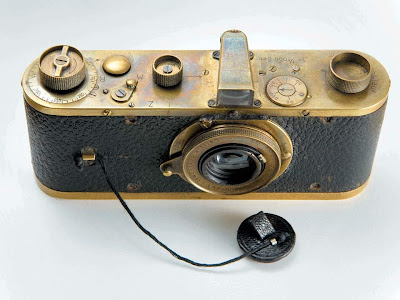 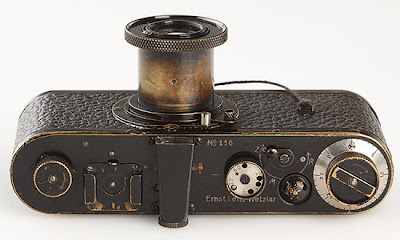 
For more information on Barnacks Handmuster (Sample) camera go to:

Posted by LEICA Barnack Berek Blog at 11:17 AM