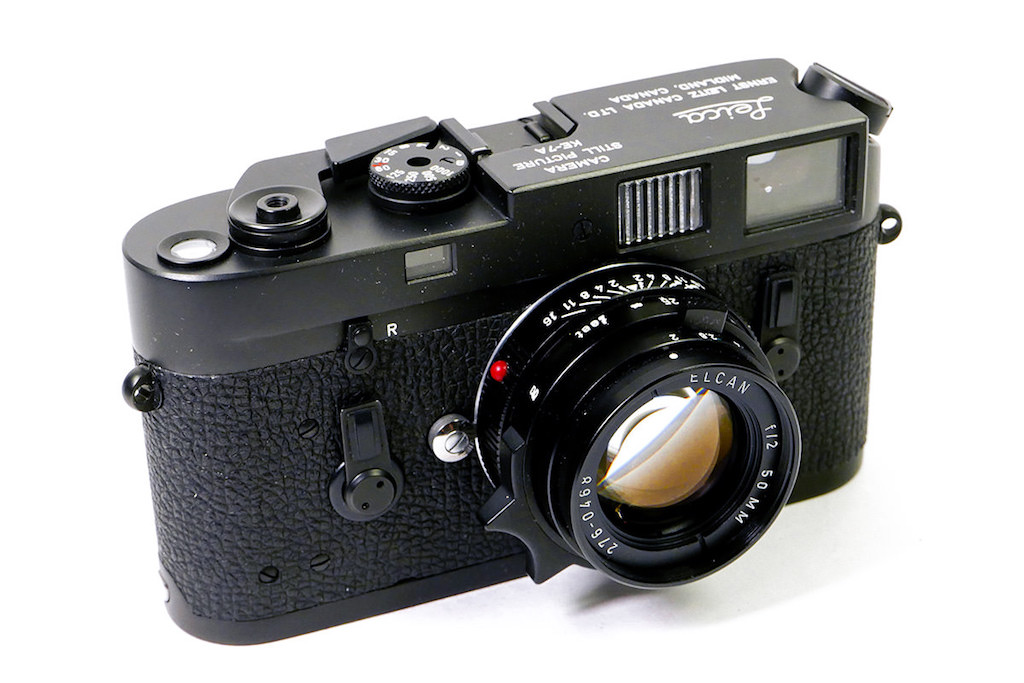 Leica lenses are known for their quality, state-of-the-art technology and design. To achieve desired results, Leica optical designers have gone radioactive in the past!

In this piece, published by the International Leica Society, Jason Schneider breaks down the quirky history behind rare earth glass Leica lenses. These lenses incorporated elements made of thorium and lanthanum glass because of their unique optical properties. Both materials emit radiation that can be measured with a Geiger counter.

Take a step back into Leica's history and learn more about the design and background of these legendary lenses.

Yes, they were (and still are!) literally radioactive, but they incorporated elements made of thorium and lanthanum glass because of their unique optical properties

By the late 1940s, the management at Leica knew they needed to come up with a superlative successor to the well-respected 50mm f/2 Summitar that had been designed by the legendary Max Berek in 1937 and had been in production since 1939. By that time, they were diligently working on a stunning new Leica camera that was to become the landmark Leica M3 of 1954, and their goal was to grace it with the finest, most advanced 50mm f/2 lens the world had ever seen.

The assignment fell to Gustav Kleinberg and Otto Zimmermann, two of the most brilliant optical designers at E. Leitz Wetzlar and close associates of Berek, who passed away in October 1949. To create what became the Summicron, a 7-element, a 4-group masterpiece with elements having shallower curves than those in the Summitar, they needed to use glass that provided a very high refractive index (light-bending power), along with very low dispersion (the differences in light-bending angles for various wavelengths of light.) The classic measure of the optical dispersion of a glass is its Abbe number; the higher the number, the narrower the dispersion spectrum, and the easier it is to control chromatic aberrations, etc.

At the time, the only way to achieve glass that provided a very high refractive index and a high Abbe number was to incorporate a “rare earth,” thorium oxide or lanthanum oxide, into the glass itself. Both materials emit radiation that can be measured with a Geiger counter, but thorium is significantly more radioactive than lanthanum because a much larger percentage of it consists of an unstable isotope. The eventual plan was to use a special Krown Lanthanum glass (later licensed to Schott Glass Works as LaK9) that was formulated by Broemer and Meinart in Wetzlar’s renowned glass division. But LaK9 glass wasn’t available until late 1952, and even then only in limited quantities.

The interim solution: the very first batch of  “stealth” 50mm f/2 Leitz Summicrons, identifiable by having a star (asterisk) engraved after the word Summitar on their identification rings, and early examples of the correctly labeled collapsible Summicron dating from late 1951 to 1952, used thorium glass supplied by Chance Brothers  & Co, Ltd. of West Smethwick, England! For the record, thorium (aka Torio) glass was used for elements 1, 3, 6, and 7. These lenses are the unique and collectible “radioactive Summicrons” of lore and legend that tend to acquire a yellowish-brownish cast over time that can be eliminated by extended exposure to UV (that is, sunlight.) According to those who’ve shot with a wider variety of 50mm f/2 Summicrons than I, the earliest Summicrons and the very rare Star Summitar are quite good but not stupendous in terms of image quality. Later iterations of the classic 7-element 50mm Summicron (serial numbers 993,000-1.030,000) that employ lanthanum (LaK9) glass provide noticeably better imaging performance, especially wide open. However, this and subsequent improvements were the results of tweaks in the optical design, not the type of glass used. The great Walter Mandler, then chief optical designer at Leitz, was responsible for many of these optical upgrades, including the design of the 6-element, 5-group, and 6-element 4-group 50mm f/2 Summicrons, both of which incorporated other types of lanthanum glass.

While analyzing the possibility of developing a new, faster 50mm Elmar lens back in the ‘50s, the Wizards of Wetzlar determined using then state-of-the-art computer-aided design (CAD) that the latest Red Dial version of the classic 4-element, 3-group 50mm f/3.5 Elmar would be difficult to improve upon at a maximum aperture of f/3.5. However, if they wanted to increase its maximum aperture by 2/3 of a stop to f/2.8 and maintain its legendary image quality, they needed to use lanthanum glass. Indeed, LaK9 glass is employed in the first and last elements of the original 50mm f/2.8 Elmar of 1957-1974, which was made in screw and M mounts. Optical performance was further improved in the 50mm f/2.8 Leica-M of 1994-2007, but to the dismay or bokeh aficionados, this version had a 6-bladed instead of a 15-bladed diaphragm. The 50mm f/2.8 Elmar enjoyed a brief spate of popularity as the standard lens supplied on Leica IIIg outfits (1957-1960) but it was produced in fairly limited quantities despite its 50-year production run (there was a total of 17,461 assigned serial numbers from 1994 to 2005.)  It’s a not stellar performer wide open, especially at the edges of the field, but it’s extremely sharp overall at moderate apertures and has lovely natural rendition and beautiful bokeh.

The fabled Leica KE-7A was made in Leica’s Midland, Ontario, Canada factory in 1972 and 1973. Its basically a black finished military version of the Leica M4 that’s been specially sealed against dust and dirt, has a winterized shutter, and the bottom plate seamed with extreme glue that enhances its tightness, the legend “CAMERA STILL PICTURE KE-7A” engraved on its top. Originally made for the U.S. military, a small number (55 body-lens outfits) were sold to the public found and their way to civilian collectors. Others had the military I.D. number on the back scratched off when the camera was decommissioned. A total of only 550 bodies were ever made so any Leica KE-7A is a rare bird indeed.

The standard KE-7A outfit included the rare 50mm f/2 Elcan (which stands for E. Leitz, Canada) lens, a unique formula consisting of 4 non-cemented, air-spaced elements designed to withstand the rigors of extreme weather and service in active combat zones. The lens, which was designed by Gary Edwards, Walter Mandler, and Erich Wagner, had a 10-bladed diaphragm providing apertures of f/2-f/16, and it focused down to 30 inches. It was constructed of anodized aluminum, and incorporated lanthanum infrared-absorbing glass and high refractive index optical glass, so, like the lenses above it emits radiation. Regrettably, I have never shot with one of these gems, but it’s reputed to be a superb lens capable of outstanding image quality even at maximum aperture—which demonstrates what you can achieve with custom designed, bench assembled optics and mil-spec quality control.

There was a slew of additional super-rare, limited-production Elcan lenses made in M- and R-mounts and designed for the military during the Cold War era. All were designed by or with the input of Walter Mandler, all evidently incorporated lanthanum glass, and all delivered astonishing performance according to those who’ve used them. The 66mm f/2 Leica Elcan was an ultra-high-resolution M-mount lens for the KE-7A reportedly ordered by U.S. Navy and also used by NATO. I haven’t been able to come up with a diagram, but it evidently had 9 elements, a minimum focusing distance of one meter, and took E39 filters. In addition to the 50mm and 66mm f/2 Leica Elcans, Leitz Canada also created a 90mm f/1.0 Elcan, which must have been a pretty hefty handful, and three ultra-high-resolution R-mount lenses for Leica SLRs.  This latter trio consists of the75mm f/2 Elcan-R, 180mm f/3.4 Elcan-R, and the 450mm f/5.6 Elcan-R. These lenses were probably not equaled, much less surpassed until the recent Leica lens designs spearheaded by Peter Karbe.

Perhaps the best way to conclude this fun exploration is to quote from the cogent comments Phil Forrest posted on the Rangefinder Forum on 8/8/17 Here’s a lightly edited, somewhat condensed version:

“The optical properties of old classic lenses won’t likely be replicated in the near future or ever, for that matter. Lead, Lanthanum and Thorium glass production were halted as of 2001. For example, the 38mm (Zeiss) Biogon in the (Hasselblad) SWC underwent a slight formulation change due to the new glass restrictions. Most of the heavy metal glasses were phased out in the late 70s and 80s due to environmental and workplace hazards. So, there’s one reason.

But as far as Leica goes, they have staked their claim into the digital realm. They can’t reissue older designs due to the restrictions of the digital sensors and the very short lens registration, 27.8mm…. Leica (is) designing the nodal point of their new fleet of lenses farther forward so the light rays are more perpendicular to the sensor….  you can’t use (many superb classic lenses) on what Leica sees as their future, without workarounds and image compromise. A 66mm f/2 Elcan could certainly be done but it was a special, rare, niche lens, which never was intended for use by the general population. Design, ray-tracing, tooling, sourcing glass, all would be very expensive, and the sales wouldn’t pay for the investment.”

For the complete article by Jason Schneider go here:

Our sincere thanks to Jason Schneider and the International Leica society for allowing us to reprint this article.