ENLARGEMENTS FROM NEGATIVES - A DIFFERENT APPROACH TO FIXING

As small as Leica is as a company when compared to the Canons and Nikons of the industry, they remain as a major player in the manufacture of 35mm film cameras.  Many loyal customers remain that have not totally succumbed to the siren song of digital photography and many of them still enjoy making their own prints in a good old fashioned darkroom instead of a digital printer.

A very important part of analog photography is to properly fix out prints and enlargements.  Old photographic wisdom tells us that we have to use a two bath fixer to make black & white photographs last.  This is accompanied by lengthy washing to allow all traces of fixer to be removed.  While any of this does not present any nominal problems with resin coated papers, sufficient fixing and washing does become more problematic with fiber base papers.  Washing times of one or more hours are not unusual.  A lot of darkroom enthusiasts shy away from fiber base papers because of the lengthy developing process.  This brings up the request of viable alternatives. 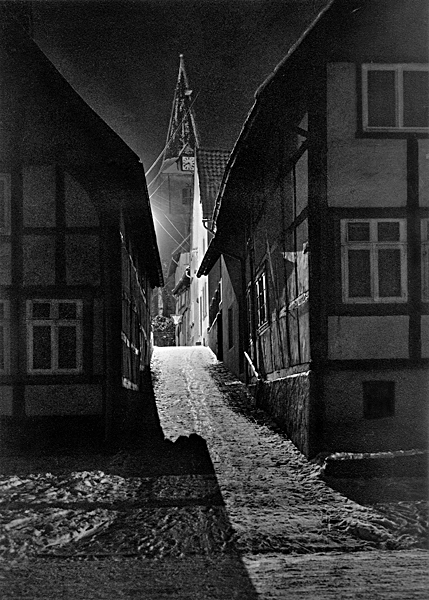 Image scanned from an enlargement on Agfa Portriga Rapid,
fixed with the method described in the article

In an article by Ralph Steiner, published by the Graphic Arts Research Center at RIT (Rochester Institute of Technology), he offered such an alternative.  This method was further researched, and verified by Ilford.

Both research papers suggest to replace standard fixers with fast working fixers like Kodak Rapid Fix.  Further more, it is suggested to use these fixers at film strength.  Mr. Steiner states that sufficient fixing is achieved within only thirty seconds.  This is then accompanied by a wash of only 5 to 10 minutes with fiber base papers.

Since film strength rapid fix achieves sufficient fixing in only 30 seconds, the paper is submerged only very briefly, leaving the fixer little time to soak into the fibers of the paper.  Subsequently, only a short wash time is necessary to remove these fixer traces from the paper.  Mr. Steiner writes:

Should you think to compensate for your LONGFIXING by LONGWASHING, just give up on that idea.  I tried washing a LONGFIXED print for two days!  In two days of washing I finally got a LONGFIXED print down to around the residual hypo of a FASTFIXED print which had twelve minutes washing.  Both washings were uncrowded and thorough.