DO NOT BOW TO EVIL

We have heard of “TheFreedom Train”, an account where the Leitz family helped a large number of Jews to escape persecution during the ThirdReich.

I have just come across a rather detailed account of what some individuals had to go through to escape possible transfer to a concentration camp with the help of Ernst Leitz II and Elsie Kühn-Leitz and, even more so, what awaited them when arrested.

In 1943 Gauleiter Sprenger and the Gestapo in Frankfurt had the ambition to make their district completely "free of Jews.”

This campaign reached Wetzlar on May 23, 1943. On that day, Flora Bonus and her sister Rosa Best received a summons to the Gestapo in Frankfurt.  The following events are well documented.

To help, Ernst Leitz II sent an acquaintance of his, the masseuse Julie Gerke, to the shop of optician and photo retailer Hermann Palm to look after his Jewish wife.  At the shop she met the daughter of Mr. Palm, Mrs. Irle.  She explained that her mother was completely disturbed because she was to be arrested. "

Hedwig Palm and her daughter Helene

Both went into the room behind the shop, where Mrs. Palm was crying and declared to commit suicide or to flee to Switzerland to her sister. Mrs. Gerke reported about this to the Leitz family and said: "That is quite dreadful, the woman must be helped."

Elsie Kühn-Leitz, the daughter of Ernst Leitz II, suggested: "Take her to Aunt Ella's."  She was referring to Mrs. Bocks, the sister of Ernst Leitz, who lived in Munich. Frau Gerke was planning to travel there in the next few days.  She immediately agreed, bought two train tickets and accompanied Mrs. Palm to Munich on May 28, 1943.

After her return, she explained to Mr. Palm where his wife was staying.  The next day Mrs. Irle came to her and announced that her mother had received a summons to the Gestapo. She asked her to mail two letters in Frankfurt.  These were fake farewell letters to the husband and daughter.

After some time Mrs. Gerke received a letter from Mrs. Bocks asking her to pick up her Leica and binoculars at Mr. Palm’s shop and bring them to her in Munich.

The dangerous border crossing into Switzerland failed due to betrayal

Elsie Kühn-Leitz described the further development in her post-war memories:

"Gradually, however, my aunt and Mrs. Palm's waiting time and uncertainty about the danger of the situation was too long and Mrs. Gerke and I discussed the border crossing. After previous inquiries in Frankfurt, a border crossing at Thingen / Rhine in the direction of Schaffhausen seemed to be the best way. I gave Mrs. Gerke a map and pointed out the way. I also obtained 10 Swiss francs for her, so that Mrs. Palm did not need to be without appropriate national currency after crossing the border. Mrs. Gerke went to Munich, and the two women made the difficult attempt to cross the border. They confided in a milkman who drove a truck. They gave him money and a binocular, for him to show them the best way to the Swiss station and to escort them. But he had nothing better to do than to point them out to the next German border officials. This led to their capture and imprisonment in Waldshut. "

Julie Gerke and Hedwig Palm were arrested on 4 July 1943 at the Swiss border. While Ms. Palm were under Gestapo arrest in Frankfurt on July 9, Ms. Gerke had to defend heself in the Waldshut district court.

Ms. Gerke was sentenced to eight weeks' imprisonment on 5 August but was arrested again on 3 September by the Gestapo.

"Since Frau Gerke was once again in jail and had previously issued threats against me and our family as informers and assistants in the cause of Mrs. Palm, I could now expect my own persecution."

Ernst Leitz II and his daughter were ordered to the Gestapo on September 10, 1943.

"First, my dad was interviewed alone. I was not allowed to attend the interrogation. After about 2 hours of waiting, which seemed infinitely long, it was my turn. I was now being asked about the details of the Palm case and it was made clear to me that I had committed one of the greatest mortal sins against the Third Reich, supporting a Jew, an archenemy of the Führer and the Third Reich.

In the end, I replied that I might have acted against a law established by men, but never against divine law, because before God all people are equal, whether Jews, Christians or Gentiles, so I have nothing to regret. "

Elsie Kühn-Leitz was arrested, but promised to be back in three days - it would be almost three months.

Dr. Elsie Kühn-Leitz and her children Cornelia and Knut

Towards 9 pm the transport reached the prison at Klapperfeldstraße in Frankfurt. The worst were the large-scale attacks during which the prisoners had to endure in their cells.  She had to survive several of those bombing nights.

Her imprisonment ended on November 28, 1943 with the help of a friend of the family and because her father Ernst Leitz had "sacrificed thousands and thousands for bribes of the Gestapo." But she was only really free after March 29, 1945 when the invasion of the Americans reached Wetzlar.  Until then, she was repeatedly interrogated.

Ernst Leitz II was cited on 13 December 1943 for "favoring the Jews.” He got away with a warning because his daughter had taken full responsibility for the assistance in the escape.  Julie Gerke was interned after the war as a Gestapo spy by the Americans in Wetzlar.  She had denounced several other people besides the Leitz family.

Hedwig Palm had the most difficult experience.  She was deported from Frankfurt on November 11, 1943 to the women's concentration camp Ravensbrück.  Most likely right at the beginning of the Frankfurt detention, she agreed to work as a Gestapo spy to save herself.
Her family could do little for her. They sent packages of food and clothing, and wrote letters of encouragement. Once she could see her daughter and son-in-law from the window.  All letters included requests for food:

“I’ve been here for over 5 months.  My weight is still about 110 pounds.  I'm terribly hungry and ask you to help me all you can with food.”

She also asked to file for a pardon and reported that she was glad to work as a knitter because the exterior work was so much harder. For three months she had a terrible whooping cough. The last correspondence was received by her family in March 1945 from the camp Uckermark.  She died there.

Even Helene (Leni) Irle spent six weeks in a rattling field prison, where she was repeatedly badly mistreated.

"In the cell where I was staying, the water ran off the walls, the straw bag I lay on was completely soaked, most of the time I spent in detention, the cells were unheated."

Their release from custody was conditional on the payment of a "fine" of RM 1,000.  For years after the war she suffered from gallbladder disease and rheumatism.

Ernst Leitz II and his daughter Elsie Kühn-Leitz deserve immense credit and gratitude to extend a helping hand in total disregard for their own safety and well being. 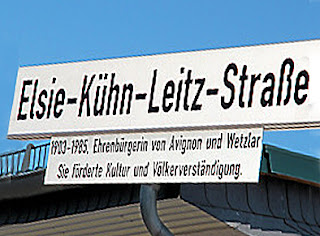 A street in Wetzlar was named Elsie-Kühn-Leitz Straße
"1903-1985. Honorary Citizen of Avignon and Wetzlar
She supported Culture and International Understanding"


Posted by LEICA Barnack Berek Blog at 9:28 AM