OLD CHMISTRY FOR THE MODERN DARKROOM

With photography solidly entrenched in the digital world we sometimes forget that not everyone has hopped on that bandwagon.  There is a solid group of photographers who continue to use film for a variety of reasons.  Of course this includes many Leica users.  While most camera manufacturers have left the analog camera world, Leica is one of the few who is still making film cameras.

Unfortunately, manufacturers and suppliers of photo chemicals have dwindled to only a few and many of the chemicals we got used to are no longer available.  That made me think of an incredibly versatile developing system my father used years ago in his studio.

His objective was to maintain as much control as possible during film development.  He did not like to rely on only one developer where he could only alter developing time or dilution.

His developer consisted of five base solutions, each with its own characteristics, which could be combined in various proportions to achieve a wide variety of negative characteristics.  The system allowed utmost control during development for under or overexposed negatives, or it could be used to raise or lower contrast in normally exposed negatives.  It could also be used as a variably active compensating developer.  Generally speaking, this formula could be used to pull the best possible density and contrast from negatives made in any sort of difficult shooting conditions.

The following charts outline the chemicals, combinations, and developing times.

Please note that the numbers in the “time” column are only a guide of where to start.  Ultimately you have to experiment based on the films used. 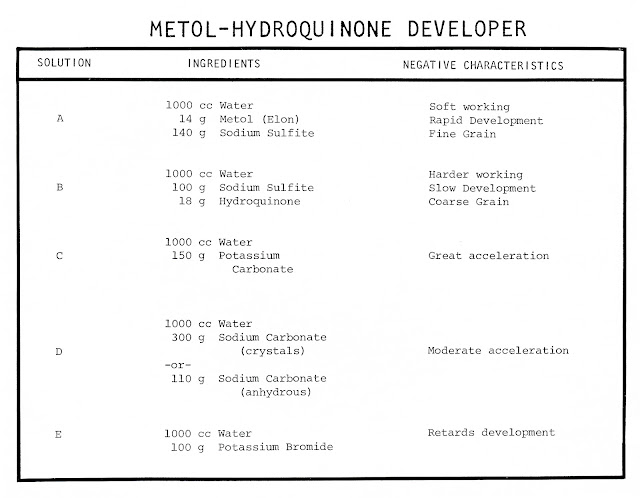 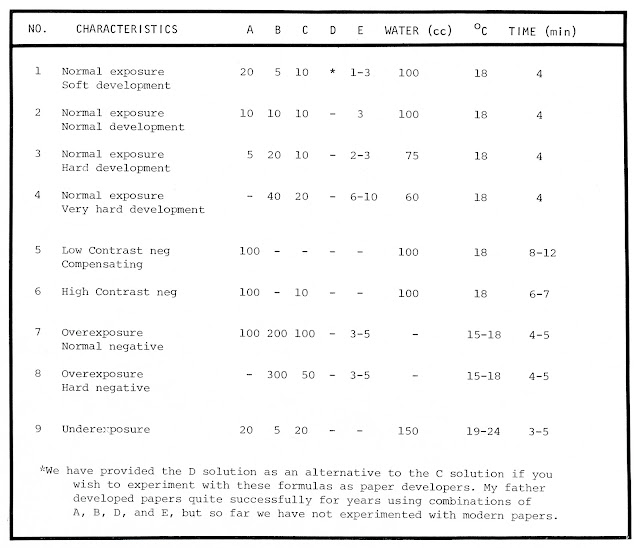