HOW THE LEICA CAME TO BE

One of the first tasks Oskar Barnack  was asked to do when he joined Leitz in Wetzlar was to build a 35mm motion picture camera.  This was thought necessary because his friend Emil Mechau was working on a new design for a motion picture projector that used a rotating prism to switch from frame to frame instead of the common cam claw arrangement.  The camera was needed to produce motion picture film for testing purposes.  It is interesting to note that this camera was the first all metal motion picture camera ever made.  The time was 1911, when no light meters were yet available and exposure settings were not much more than an educated guess.  The problem of determining accurate exposure setting was made even more difficult because film emulsions at that time fluctuated considerably.  One practice was to expose the film as best as could be determined.  Then a few frames were clipped off and developed prior to developing the entire roll.  Exposure differences were then compensated for by increasing or decreasing the actual developing time of the film roll.  This was less than ideal because developing time differences can lead to changes in contrast. 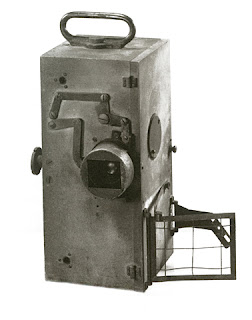 That gave Barnack the idea to build a small exposure testing device, a camera that would take the same 35mm motion picture film.  This was used to make a variety of test exposures.  Developing the film would then reveal the best exposure settings for the motion picture camera.

Virtually all literature available today mentions the Ur-Leica, the original Leica prototype, as being this exposure testing camera.  However, this absolutely makes no sense.  35mm motion picture films to this day use the 18 x 24 mm half frame size which runs through the camera vertically.  In addition, most of the motion picture cameras at that time used a fixed exposure time of 1/40 sec.  In comparison, the Ur-Leica uses a full frame 24 x 36 mm negative size running through the camera horizontally.  It also has adjustable exposure time settings.  That begs the question of why Barnack would have made those changes which were totally unecessary to produce just test exposures for his motion picture camera.

I have always felt that his test exposure camera preceded the Ur-Leica from 1913.  Unfortunately little information is available, but persistent digging has revealed my assumption to be correct.  In the “Kleines Leica Buch” (Little Leica Book) by Theo Kisselback there is a reference to the test exposure camera on page 7.  Kisselback writes about Mechau’s motion picture projector and Barnack’s motion picture camera.  He explains that 1905 Barnack had experimented with a 5 x 7 inch plate camera which he modified to take a series of 15 to 20 individual photographs on the same plate.  But the resulting photographs were not to his liking, primarily because the grain structure of the plate negatives didn’t lend themselves to any nominal amount of enlargement.

Then, when he began to work with his motion picture camera, he built a small camera in addition for test exposures which made him think back to the old idea of small negatives.  The format just needed to be bigger.  He doubled it in length, to 36 mm and a height of 24 mm and the format for the Leica had been created.  It was then that he started with the actual construction of the Ur-Leica [the original prototype of the Leica], free from any restrictions he was able to create something entirely new.

Oskar Barnck himself also alluded to the shortcomings of the motion picture film format.  During an interview by Kurt Emmermann, published in Emmermann’s ‘Leica’ magazine, Barnack explains:

But meanwhile I had become more demanding.  The postcard and even more so the size might be nice souvenir pictures, but the actual , real picture emerges only at 5 x 7 or better yet at 8 x 10.  Even these sizes appear quite small once one has seen pictures 20 inches wide.  It is really true that, the larger the picture, the more plastic [three dimensional] and realistic its effect.

For that purpose the motion picture frame was too small.  Since regular film unfortunately was not permitted to become wider because of the wonderful invention of standardization, I had to employ as much feasible length in order to make optimum use of it.  Right off, I tried to double the frame width and what do you know, it worked out very well; that is, 24 mm wide and 36 mm long.  That is how the Leica format came to be.  In other words, it was not the product of prolonged pondering, as was the case later with other camera parts that frequently seem quite insignificant.  To this day, I still consider the proportion of 2 by 3 as the most attractive one.

Now the actual designing of the Leica began.  I gave a free reign to my yen for the unusual and the novel.  I was not restricted by any particular assignment or direction, as would be the case in a modern design department; rather it was a private hobby.  Because I was not inhibited by customary guidelines and because I used hardly anything that was heretofore considered essential for a good photographic camera, the result was this novel type of camera.

Both of these accounts clearly show that the exposure testing camera was different from the Ur-Leica of 1913 and that is was the results obtained from the test exposure camera that lead Barnack to optimize it and the Kinofilm (35mm motion picture film) with the creation of the Ur-Leica.