It is a little known fact that Ernst Leitz Wetzlar GmbH (the name Leica Camera used to be called) was the first company to develop a working autofocus system.  Between 1960 and 1973 the company patented a number of autofocus technologies, and then showed that technology at the Photokina in 1976 and 1978 as the Leitz Correfot.  A further improved prototype was shown to the public at the Leica Historical Society of America (LHSA) meeting in Minneapolis in Fall of 1980.

The common CdS light meter cells at that time proved to display also sensitivity to variations in contrast.  It is a known fact that an image displays the highest contrast when in focus.  By using two CdS cells it was possible to accurately determine the highest contrast level and thus accurate focus.  The system was somewhat similar in concept to today's phase-detection systems - except that it required a vibrating diffraction grating to work accurately. 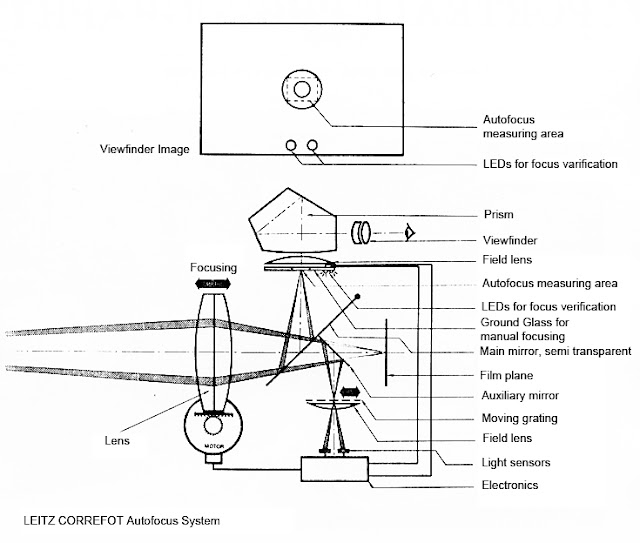 The prototype was a completely operational system built into the shell of a Leicaflex SL2.  All sensors necessary for the automatic focusing were part of the camera.  It was designed to use the conventional Leica R lenses on the market at that time.  The system required the lenses to be focused manually with the help of focus verification via two LEDs on top of the viewfinder.  The camera shown at the LHSA was also shown with a servo motor equipped 50mm f/1.4 Summilux R which provided true autofocus operation and made electronics-aided hand focusing unnecessary.

Careful inspection of the lens revealed meter couplings for the Leica R3 and R4 cameras.  But any questions about a possible production model were met with polite smiles and silence.

I feel we must applaud Leitz’ decision not to forego their standard focusing mount for the flimsy autofocus systems that were marketed in the 80s and 90s.  Virtually without exception, those were so loose that the moving section of any of those lenses could easily be wiggled back and force by a considerable margin.  That of course is far removed from the 1/100mm (1/2500 inch) precision of the Leica focusing mounts.  Other companies chose that approach because it was the only means at the time to make the focusing parts of their lenses move easily enough to allow the use of rather small autofocus motors with low enough power consumption to make them practical with common use.

Of course autofocus systems with precise internal focusing units are common today and it is expected that at on 18th September this fall, when the Photokina in Cologne opens its doors again, Leica will show a new camera with its own line of autofocus lenses that will also allow the use of older Leica R lenses with focus verification.  There have been a lot of rumors about the design of the camera, but nothing has been verified and I feel it is of no use to discuss rumors at this point.  We will find out in only a few months.