...and a feature known by few.

Being the first viable 35mm camera ever, the Leica has been copied more than any other camera.  Thus the Leica is also responsible for putting some of its competition on the market.  The Leica is the cornerstone of 35mm photography and there should be no doubt that photography as we know it today would be much different without Oskar Barnack, Max Berek, Ernst Leitz II and the original prototype, the Ur-Leica from 1913.

As soon as the Leica had proven that 35mm photography was to be taken seriously, other companies followed with their own cameras in this new field of photography.  The second 35mm camera to reach the market was the Zeiss Contax, soon followed by the Kodak Retina, made by the old Nagel company in Germany.  It wasn't until later that Nikon and Canon joined the ever growing field of 35mm photography.

Both Nikon and Canon got their start by copying lenses and cameras made by Leitz and Zeiss.  The early Canon cameras were quite obviously based on Leica cameras.  Nikon, on the other hand, chose to copy the Zeiss Contax.  But there was more to the camera than what met the eye.  The camera body was clearly a copy of the Zeiss Contax, including the rangefinder and the lens mount.  But the shutter was definitely not a Zeiss design.  Upon closer inspection it was obvious that it was taken entirely from the Leica.  That decision apparently had been made because it was of a much less complicated design (thanks Oskar Barnack) and thus much more reliable than the vertically traveling, roller desk top type shutter of the Contax.  The Leica shutter was copied in virtually all details resulting in the Nikon being one of the very few cameras that utiluzed a collar type cable release. 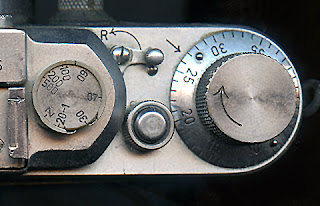 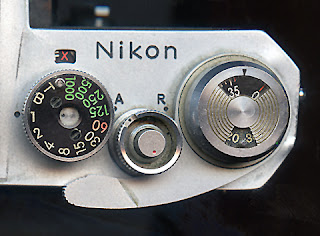 Please notice the identical position of the shutter speed dial, the shutter release and the film advance.  This is due to both cameras using virtually identical shutters.

It would be quite interesting for me to know how many readers knew about this.